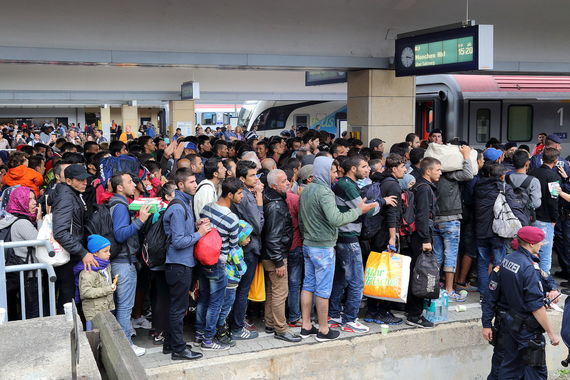 From presenting my credentials to President Obama, meetings with members of congress to conversations with visitors at our embassy: everyone wants to know how Austria, as an EU member state, has been coping with the influx and transit of several hundreds of thousand migrants since last Summer.

The urgency of this situation is clear to many Europeans, Americans and my peers, among them Ambassador Christos Panagopoulos of Greece, who has also published a blog in this publication this week.

I was still in Austria when these unprecedented numbers of people, mostly from Iraq, Syria, and Afghanistan, came to Europe last summer. Back then, I witnessed an incredible willingness to help by the Austrian public. But while Austria, alongside Germany and Sweden, welcomed hundreds of thousands of refugees with open arms over the course of only a few months, we have now reached the turning point.

It seems evident that the refugee burden cannot rest upon Germany, Sweden and Austria alone: Austria, a country of eight million people, accepted 90 thousand applications for asylum in 2015, more than one percent of our population. If we put this into a U.S. perspective, the U.S. would have 3.4 million new asylum seekers, more than five times the population of D.C. in one year alone.

In reality, the U.S. has committed to accepting ten thousand refugees from Syria, i.e. 0.003 percent of the U.S. population. This should in no means discredit U.S. efforts, it is only to highlight the sheer numbers Austria is confronted with.

For 2016, the Austrian government has just introduced an intake cap of 37,500 refugees, a policy some have criticized as "un-European". But it is our understanding that we have to act and implement measures to relieve the pressure this unprecedented crisis has caused for our society.

This is certainly not an "anti-European" approach. Our government has always and will continue to call for a European solution and to show solidarity with those in need, as even Austria's capped intake quota will remain one of the highest in Europe in 2016. However, as long as some members of the European Union are not forthcoming to working with the most affected destination countries like us, Austria sees itself forced to act unilaterally and through special agreements with neighboring countries. On February 24, 2016, Austria convened the conference "Managing Migration Together", which was attended by the ministers of foreign affairs and of the interior of Croatia, Slovenia and other countries of the Western Balkans. This conference was an important step towards a solution to the uncontrolled inflow of people to Central Europe and an important step for Austria to reduce the strain this crisis has put on our social welfare state and our sense of community.

All participants agreed that efficient management of the migration and refugee crisis requires a coordinated and comprehensive approach addressing all aspects in order to find sustainable and fundamental rights-compliant solutions, and not only temporary results. This includes increased efforts of all relevant EU actors and partners. Persons in need of international protection should receive protection as soon and as close to their countries of origin as possible.

As Austria's Minister of Foreign Affairs Sebastian Kurz said this week, for the amount of money it costs to help one refugee for one year in Austria, the European community can do the same for up to 20 people in the region. While this approach might seem like common sense, we still need a European solution. Europe needs to take back control over its external borders and then distribute people in need over the entire Union as the right to asylum does not include the right of applicants for international protection to travel onwards and choose a country of preference. We therefore cannot tolerate a situation in which individuals travel from Greece to Austria in only 48 hours in order to apply for asylum. Neither can the burden of hundreds of thousands applicants for asylum be carried by Sweden, Germany and Austria alone. Our new measures have not been taken because we are bad Europeans, they have been taken because the burden for the Austrian people, our society, and social welfare system has become too great to ignore.