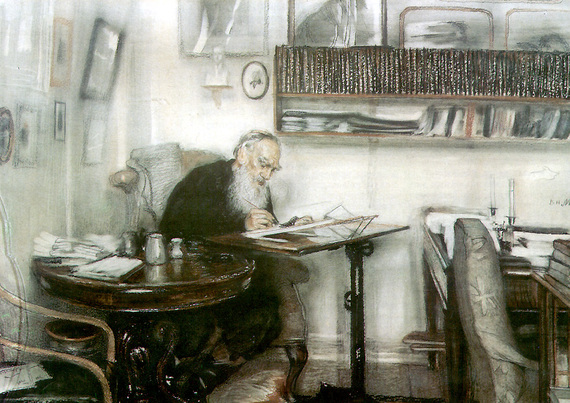 When we think of Leo Tolstoy, we tend to think of distinguished, perhaps tricky, Russian literature. Yes, Tolstoy's novels, including War and Peace and Anna Karenina, are some of the most influential ever written (and I certainly think they're worth reading).

However, one of Tolstoy's most exciting publications has passed by almost unnoticed: his "calendar of wisdom", which he thought of as his most important contribution to humanity.

A Calendar of Wisdom is Tolstoy's anthology of inspiring quotes and 'daily thoughts to nourish the soul'. With snippets of wisdom for every day of the year, we can have Tolstoy as our mentor through life's challenges, highs, and lows. Tolstoy wasn't an example of a perfect human being by any means, but he certainly had a way with words--both in shaping his own writing and finding the very best of others.

In 1885, Tolstoy outlined his project for A Calendar of Wisdom to his assistant, Vladimir Chertkov:

I know that it gives one great inner force, calmness, and happiness to communicate with such great thinkers as Socrates, Epictetus, Arnold, Parker. ... They tell us about what is most important for humanity, about the meaning of life and about virtue. ... I would like to create a book ... in which I could tell a person about his life, and about the Good Way of Life.

Tolstoy spent over fifteen years collecting quotes for his collection: an incredible feat in itself which underlines the variety and depth of wisdom in the book. The writer would often contemplate the value of his project, considering in his diary thoughts such as, "what can be more precious than to communicate every day with the wisest men of the world?"

It's worth considering this as the 186th anniversary of his birth is celebrated on September 9th 2014. We can read Tolstoy to help us overcome our feelings of anxiety, work out where we want to go in life, and find purpose and meaning. Diving into the philosophers, writers and spiritual guides which inspired Tolstoy to create his landmark texts seems like taking this one step further.

There are approximately five thoughts selected by Tolstoy for each day, including selections like the following:

Do not regret the past. What is the use of regrets? The lie says that you should not regret. The truth says you should be filled with love. Push all sad memories away from you. Do not speak of the past. Live in the light of love, and all things will be given to you.
- Persian wisdom (January 27)

A wise person thinks more about life than about death.
- Benedictus Spinoza (June 24)

On gaining control of your thoughts:

Do not allow yourself to be infected by the mood or spirit of those who abuse you; do not step onto their path.
- Marcus Aurelius (August 5)

When you feel the desire for power, you should stay in solitude for some time.
- Henry David Thoreau (August 27)

Whether we want to understand what influenced Tolstoy, or simply find superb quotes to influence ourselves, our work, and our lives, these 'daily thoughts to nourish the soul' are worth having nearby.

The first-time translation is "A Calendar of Wisdom: Daily Thoughts to Nourish the Soul, Written and Selected from the World's Sacred Texts" by Peter Sekirin and is published by Scribner.

As a final note, here's Tolstoy's wish for readers of A Calendar of Wisdom, as included in his introduction:

I hope that the readers of this book may experience the same benevolent and elevating feeling which I have experienced when I was working on its creation, and which I experience again and again, when I reread it every day, working on the enlargement and improvement of the previous edition.