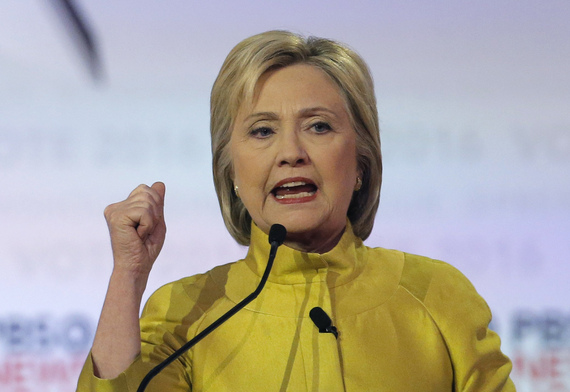 The New York Times recently reported that Donald Trump is planning an all-out assault on Hillary Clinton during the general election debates. Many of us saw this coming, of course. I firmly believe that Trump is going to engage in a brand of name-calling and character assassination that we have not seen in modern politics. Nothing will be off limits.

Indeed, Trump may be Clinton's biggest challenge yet. After a career of being tested by attacks, character assassination and scandals, Trump represents her final great confrontation. In what is most likely her final political campaign, she will face a rival who has demonstrated a total lack of understanding of political decorum. He has broken every major rule and only become more popular. His rivals have tried to mock him, insult him and call into question his integrity. He has overcome all of that and leveled much more devastating attacks in response.

Hillary Clinton should consider leading her strategy to overcome Trump's attacks with rising above his muckraking and seeking to elevate the level of political discourse in the general election. For example, recently the Democrats sent out a mailer against Trump referring to him as "Dangerous Donald" -- immediately stooping to his level. Clinton should request that the Democrats no longer engage in this type of childish behavior and should instead run a campaign based on high ideals.

We are never going to win a name-calling contest with Donald Trump. He is nastier. It comes to him naturally. And, as low as Clinton might possibly stoop, Trump will stoop lower. That is his game. Instead, Clinton could energize her base with a campaign infused with the idealism it has sorely lacked up to this point. One of the main criticisms of the Clinton campaign is that it lacks the unbridled enthusiasm that Bernie Sanders' campaign possesses. A pivot to a more inspiring campaign theme coupled with big ideas might give Clinton an edge over Trump going forward.

Every successful presidential candidate makes a pivot from the primary to the general election. As the Democratic Primary wraps up, Clinton will surely set her eyes on a pivot. I have heard ideas ranging from allowing Sanders to help set the party's platform to selecting Elizabeth Warren as Clinton's running mate. Both are solid ideas and give me hope that Clinton is aware of her weaknesses and is hoping to strengthen her campaign with an infusion of fresh ideas and energy.

It would be wise of her to also consider how she will engage Trump and how she will respond to his many attacks. Clinton should stay positive. She should focus on her vision for America. And, she should not engage in the kind of politics that she has practiced during the primary. During the primary she has often been condescending, hyperbolic and dismissive. She and her supporters have alienated a large swath of Democratic Party voters -- many of whom have pledged to never vote for her.

There is a lesson to be learned from the primary. Where many of Hillary's supporters were incredulous at the idea that anyone would support Sanders over Clinton, in the general they and Clinton herself should be more humble. Clinton is viewed by many as an establishment front-runner. Much is expected from people in that position. Most people want to vote for someone of whom they are proud. Clinton has a huge opportunity to make us all proud by running an uplifting campaign and vanquishing the devil that is Trump.

I hope in the general election that Clinton will run an idealistic and uplifting campaign. The alternative is two candidates slinging mud at one another, hoping to be the last fighter punching. That is not what America needs right now and will only deepen the rift between the two parties. We need a president who will seek to heal the old wounds of the past and bring the country together around a message that inspires. Think of the opportunity Clinton has to ameliorate her relationship with Sanders' supporters, woo independent voters and give reasonable republicans an option in the general election. She can do all of this and win the general election by staying level-headed, focusing on bold policy ideas and rising above Trump's nonsense.