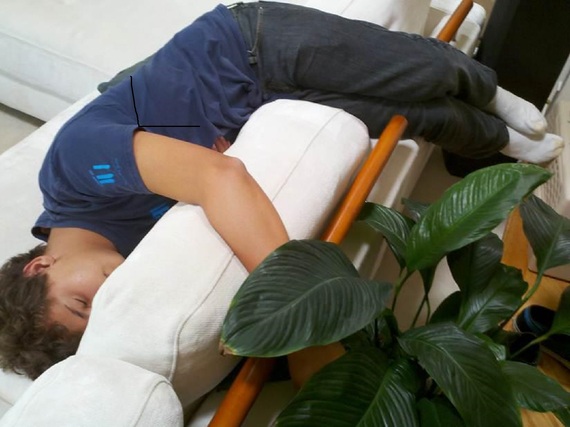 My school system wants to change their 7:17 a.m. high school start time to 8:30 a.m. You'd think the sky was falling.

I've been watching my district try to make this change since we moved here 16 years ago. Back then my oldest child was 12. As a medical writer, I was concerned her future high school would start at just after 7 a.m., a time doctors were already saying was incompatible with healthy teen sleep. I was relieved when I read that school leaders knew this research and were planning to pilot a 9 a.m. start time. But that pilot never got off the ground. My daughter and my younger kids all started high school at 7:17, and to this day high schools here still start that early, with some kids at bus stops before 5:30 a.m. Meanwhile, that 12-year-old is 28 and just had a baby of her own.

Since then evidence has grown even stronger that early bell times are taking a huge toll on children's health and wellbeing. These hours have been linked to teen sleep deprivation and a laundry list of associated health, safety, and school problems, including obesity, depression, car crashes, truancy, tardiness, and substance abuse.

You Can Put a Teen to Bed, But You Can't Make Her Sleep

Of course, school hours aren't the only culprit. Teens, like most of us, often make sleep a low priority. But even teens with perfect habits can't get the sleep their still-growing brains and bodies need when they have to wake at dawn. Not only do many school activities run past 9 or 10 p.m., but hormonal shifts at puberty (even in other mammals who are not staying up texting) make it difficult for most teenagers to fall asleep before about 11 p.m.

That's why the American Academy of Pediatrics (AAP) recommends that middle and high schools start no earlier than 8:30 a.m.--a recommendation echoed by the Centers for Disease Control and Prevention (CDC). It's also why hundreds of districts in at least 43 states have delayed bell times in recent years.

Yet nearly 85% of U.S. middle and high schools still start class before 8:30 a.m., the time the AAP says is the earliest opening hour compatible with healthy sleep. Over 40% of high schools, including mine, start class in the 7 a.m. hour, or even earlier.

Many local reform efforts trigger heated community opposition that derail years of work. I see this playing out now in my own district. The community has already decided hours need changing--in general. But now that the district has announced specific schedules, there's widespread panic.

This is a scenario I've seen repeated for decades all over the country once change starts looking real. What about daycare? Afterschool jobs? Sports? Teacher training? Traffic? Why do elementary school schedules have to change to help teens? And why the high price tag when school budgets are tight, and kids are "just fine."

These concerns reflect deep-seated beliefs about sleep, teenagers, and self-regard (i.e., if these hours were really so bad, I'd be a bad person for tolerating them). Above all, they reflect fear of change. And while most concerns are red herrings, they are powerful red herrings. As Deb Delisle, former assistant secretary of the U.S. Department of Education, observed: "Having been a superintendent, I know that one of the hardest things you can ever do is to begin to tinker with the bell schedule. People go absolutely bananas over that."

School schedule change is a political hot potato that has even cost superintendents their jobs--so it's natural for them to want to steer clear of the issue or make change look as difficult and costly as possible. The community fears are equally understandable. Community life revolves around public school schedules, even for people who don't have kids, so when you propose a change, people start panicking, whether the change is earlier, later, 7 a.m. or 10 a.m.

Too often this fear overrides evidence, and even common sense. It also makes people forget--if they ever understood--the price they're paying right now for not changing.

Most of the so-called obstacles to change are either unfounded speculation or temporary, resolvable inconveniences. Years ago when my school system announced that classes would start about an hour earlier, daycare providers changed hours. Parks and Rec changed class times, and so did continuing education classes. I saw then firsthand how communities adapt to school hours, not vice versa, and how businesses swoop in to fill gaps.

The real obstacle to change is lack of political will. Schools that make sleep and health priorities can find hundreds of creative ways to run schools at safe, healthy hours.

Making that happen across the nation will take more than citing studies. It will take changing the way we think, and feel, about sleep. It will take recognizing that healthy sleep is shaped not just by personal habits but also by institutions, including schools and workplaces.

Above all, change will take thinking about sleep and school hours not as negotiable school budget items, but as matters of public health and safety. Once this sea change occurs, all the excuses about daycare and sports and jobs and even expense will seem silly at best. Requiring teenagers to be in class at 7 a.m. will become as unthinkable as leaving asbestos in classrooms or not heating them when temperatures dip.

These are all our goals at Start School Later, a nonprofit I co-founded in the fall of 2011 to ensure safe, healthy, equitable school hours for children of all ages. I'll be writing more about how we got started and what we're accomplishing in the months to come. If you think this is all a bunch of hooey, that science can "prove anything," or that the Start School Later Movement is just about bad parents and coddled teens, then this isn't for you. But if you're sick and tired of seeing children sick and tired, stay tuned!