Although he has not made any appearances in JK Rowling's novels, Anish Kapoor is a wizard. Of the art kind. The American Oxford dictionary tells us that the word "wizard" is synonymous with other potent designations: virtuoso, maestro, wunderkind, and, most tellingly for this story, guru. Yes, these titles, when attributed to a single person, are monumental, but the truth is that they dwindle when compared to the colossal art works Kapoor has been creating for decades.

One of the world's most distinguished contemporary artists, Turner Prize winning Anish Kapoor studied and began experimenting with his meticulous brand of magic in London, where he is now based. He is well known for his use of rich pigment and his imposing popular works. The vast, fleshy and trumpet-like Marsyas, which filled the Tate's Turbine Hall, the giant, reflecting pod-like sculpture Cloud Gate in Chicago's Millennium Park and his recent record breaking show at the Royal Academy, the most successful exhibition ever presented by a contemporary artist in London, are just a few examples of his work that have made a mark on the public's imagination.

After being in south rural India for the past three months--I am here doing an artist residency at the George Foundation--I headed to Mumbai to meet the wizard and talk to him about his latest exhibition: the first ever showcase of his work in the country of his birth. The big opening celebration for the Mumbai leg of the exhibit (the city where he was born in 1954) is tonight, and Kapoor has agreed to meet me promptly after landing at Chatrapati Shivaji International Airport to discuss the art--and the epic ten year process it took to bring it home--before the festivities began.

Illusion is central to a wizard's work. Kapoor's mirrored objects use reflections to camouflage themselves in their environment. These art pieces are all-seeing: their highly polished steel surfaces reflect their surroundings, distorting them and reproducing them in miniature or large-scale, depending on where you are standing in relation to any specific piece. The effect is highly ambiguous and destabilizing. What the wizard has brought to life are variations of what I imagine the opposite of a black hole to be. Like black holes, his non-objects have a gravitational field that no matter can escape, but unlike them, they are visible, rendering a luminous reality that seems more palpable than the state of things as they actually exist before us. In this sense, his surfaces become portals to a world that is comparable to ours, but where lines are nebulous and move around, faster or slower than real time, depending on how fast or slow one approaches them.

The simplest way to visualize this is to think of yourself walking up to a mirror, and having your reflection arrive a minute later. It makes you question everything that you think you know about the world around you, and it forces you to take a step back to re-evaluate. 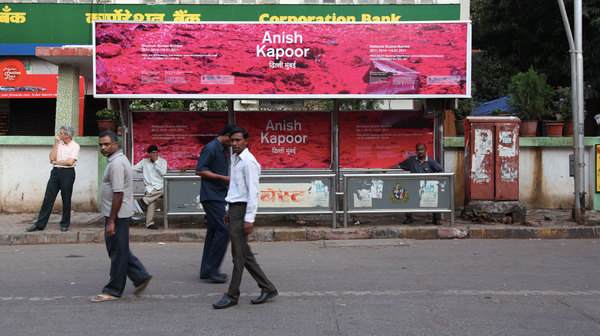 One of the many advertisements on the streets of Mumbai.

He arrives in Bollywood-land after being in New Delhi for the weekend. There, Mrs. Sonia Gandhi, President of the Indian National Congress Party, inaugurated the exhibition at the National
Gallery of Modern Art on Saturday, November 27th. The parties, meetings, and other social obligations that come with the inaugaration have kept him quite busy, but as he walks into Mehboob Studios, the site of the Mumbai exhibit, energetic and dressed to impress, you would have thought he had spent the weekend relaxing at home with his children. Wearing a sleek grey suit that must have been tailored at Saville Row's finest, he walks in smiling, confident, and ready to be photographed by the members of the press who have been anticipating his arrival. He is very much ready to talk. 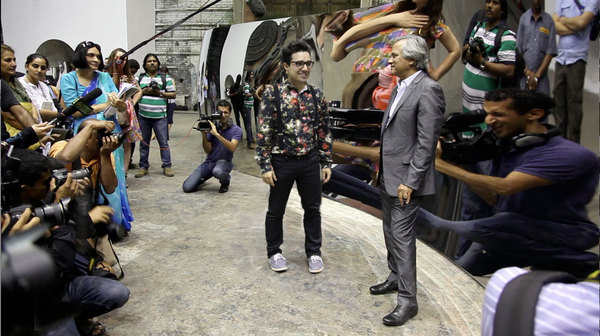 YA: After a brief walk around the exhibit, I am curious why the work is presented inside one of Bollywood's oldest film studios and not in one of the city's museums or art galleries.

AK: One of the things that made this particular place so special is that it belongs to Bombay. It has a long history...But it has always been a place from which, or let's say, where things are made but from which they emanate. Nobody ever came here. So, that we have been able to turn it the other way around, if you would like, to bring the public into the space. I think it's quite important.

I am really interested in the idea that art can reach wider, can go further, can go beyond the art world, why not? People are intelligent, people are visually intelligent, and why shouldn't the work be able to engage some of that?

YA: When you were five years old, what did you want to be when you grew up?

AK: I have no idea, probably an engineer or something.

YA: What was the first thing you remember doing to make money?

AK: Well, the first thing was...I made furniture for a little while, and then I did some teaching.

YA: Is it a challenge to keep sculpture spectacular yet meaningful?

AK: Theater, if you would like, is part of the art of making an exhibition. Truly, I am not that interested in the spectacular because the implications are of something which isn't serious, so, of course your question takes on this notion that there is something serious to do, and I think one has to hold on to both. It's a tight rope." 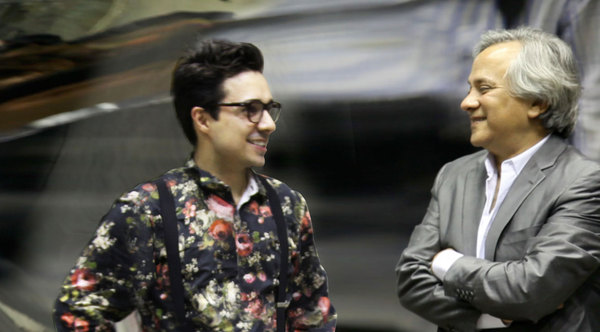 YA: In various interviews you have resisted national allegiance, why is that?

AK: I have lived in England for forty years or so, and London particularly, is a context in which artists from all over the world come to live and work there. If we are defined just in terms of one's country of origin, particularly in an art world which is so obsessed with the individual, seems to put in questions one's ability as an artist to be able to do and to create: its easier to say "Oh, it's Indian," rather than to say "this is rather inventive" or whatever. I think what I try to do is to make a distinction between the two. I am very proud of being Indian. But I'm not necessarily interested in being the best Indian artist. I want to be the best artist I can be. That's enough of a declaration of intent.

YA: Why do you think your work has caught the public's imagination?

AK: If sculpture can really deal with the body, because we all inhabit ourselves, and if sculpture can really do that, which it is supposed to be able to do, and through it ask questions, philosophical questions, about being, I think these are all things we work on, all of us in our different ways, so perhaps somewhere in there, there are moments where dumb objects can speak.

YA: How did you choose the works you are exhibiting in India?

AK: The show in Delhi is in two parts. There is a series of architectural models from the last, almost 25 years or so, and then a group of works that is more or less retrospective. I wanted to do something in this space [in Mumbai] which dealt with a whole other visual possibility, which is these two opposite bodies of work.

(Here he is referencing his mirrored-non-objects versus the two wax sculptures that are also included in the space.)

YA: Did you think about how the Indian public would react? Was this a consideration?

AK: You know one has to make a good exhibition or the best one can make. And there is no reason why the public in India should be different from the public anywhere else, really. So its very hard, so to speak, to tailor a show for the Indian public. We are all as sophisticated or unsophisticated as each other in the end. 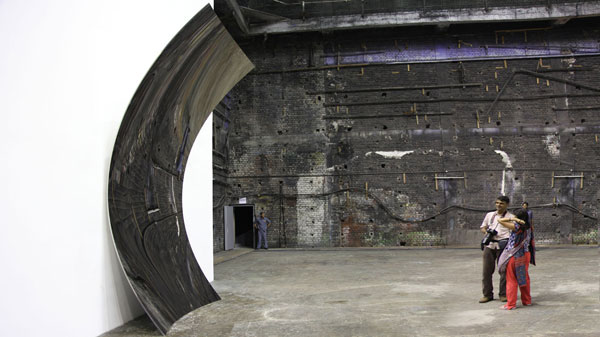 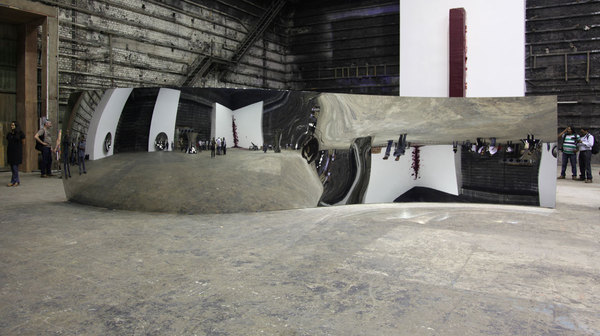 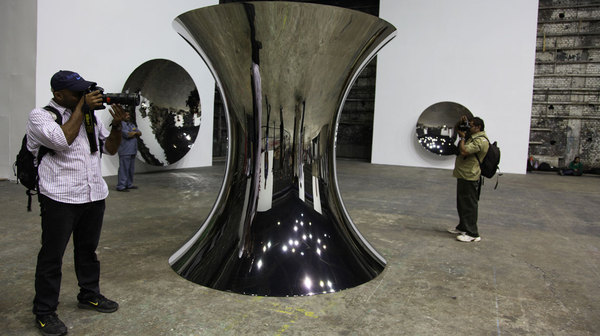 YA: I am certain that bringing these many large works overseas has been a challenging task. Was it a logistical nightmare?

AK: We have been pretty ambitious trying to do exhibitions at a scale, and in places, where perhaps, they have not been done before. So it has been a lot of hard work but we couldn't have had more help and more enthusiasm. It has been wonderful, I have to say.

YA: Have you been following the work of any Indian artists?

AK: I'm not going to name any names, but of course they are all colleagues of mine. Some of them are extremely talented and do a fantastic job. You know, Indian art, we have a history which goes back and it's as prominent as any art anywhere. I think that's very important. Its perhaps a strange quirk in our history that since independence, and really the past hundred years, Indian art has not played an international role, and it's a shame. But that's not because of the artists.

YA: What do you consider your life's greatest achievement thus far?

AK: Oh my god, I don't know. Getting up in the morning! I have no idea, I mean, being an artist is a process in the studio daily, and that's what it's about. I don't know that it's necessarily about achievement.

YA: Looking back at your career, how would you split the pie between luck, hard work, and talent?

AK: Need'em all! You know, luck's pretty good. Talent, you grow your talent. Hard work, you have to do it all the time, as we all know. I think it takes a considerable amount of determination. When I left art school I was pretty determined that I wasn't going to do anything else.

YA: Would you say you have had a period of struggle, like all artists do?

AK: You know, I left art school in '78 and I was showing with Nicholas from the Lisson Gallery by '81 so I was incredibly lucky.

YA: And that luck has stayed with you since. You have also been an ambassador for a vision of art that is connected to the subcontinent but that is also your own. How much do you actually feel your history and your blood ties have affected your sensibilities?

AK: It's a difficult question in the sense that I don't work out of whatever an Indian sensibility is because there are so many. What is an Indian sensibility? It's so many different things. But clearly, even though I don't make work that is particularly psycho-biographical, I'm not telling you about anything specific in my life. But psycho-biography is, of course, unavoidable. Somehow or the other, that relates to something and that relates to something else, you can't avoid it. In a similar way, one might say, that my kind of obsession with red has something to do with India. Does it, or does it not? It's a question that might be interesting to debate or not, I don't know. So there is, of course, a certain sensibility, but beyond that I wouldn't like to tie it to something too specific because what happens then is that you end up narrating, describing a particular situation.

And a go at it, he has. It's what real wizards do.