What Is Climate Engineering?

Global warming is a real problem. As the recent Intergovernmental Panel on Climate Change (IPCC) report, of which I was a lead author, makes clear, Earth is warming, caused by carbon dioxide (CO2) and other "greenhouse gases" emitted by humans burning coal, oil, and natural gas and chopping down and burning forests. Climate scientists agree on this. And it will be bad in general for humanity, with threats to our food and water supplies, stronger storms, flooding from sea level rise, droughts, and spread of diseases and violence.

So what should we do about it? As the IPCC also makes clear, mitigation (stopping the emission of greenhouse gases) is the solution, and we can do it by switching to energy sources that do not pollute the atmosphere with these gases: solar and wind power. Current nuclear technology is not the answer, as I will discuss in a companion post. But what if the world cannot stop emitting carbon dioxide quickly enough? And what about all the CO2 we have already put into the atmosphere that will last for centuries? We will certainly have to adapt to some of the coming climate change. But can we somehow stop the climate change?

Two separate techniques, sucking the CO2 out of the atmosphere and burying it (carbon dioxide reduction, or CDR) and blocking sunlight to cool the planet (solar radiation management, or SRM), have both been called "geoengineering" or "climate engineering" but are quite different in terms of risk and effectiveness. CDR would basically be a good idea, but it is currently very expensive and would only slowly cool the climate. On the other hand, SRM, by creating a cloud of sulfuric acid droplets in the stratosphere like volcanic eruptions occasionally do, could potentially be quick and cheap. But this is a big question, since it has never been done and the equipment to implement either cloud brightening or creation of stratospheric clouds does not exist. 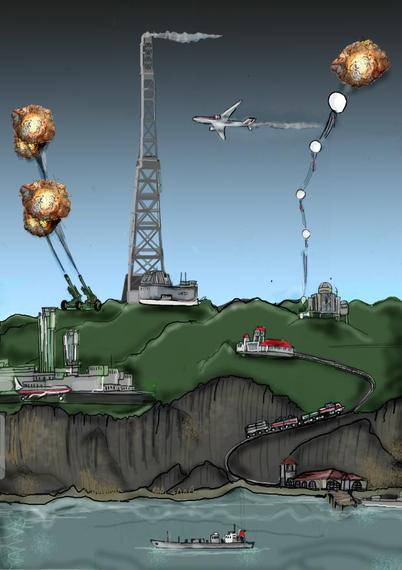 I have calculated that it would only cost a few billion dollars per year to lift enough sulfur into the stratosphere with airplanes to create a cloud to reflect enough sunlight to counteract the global warming we will experience in the next several decades, but with a big "if." The "if" is the question of whether we could create a cloud of small sulfuric acid droplets like volcanic eruptions occasionally do. But research shows that if we continued to inject sulfur into an existing cloud, as we would have to do to maintain it, the existing particles would grow rather than having new particles form. This means that for the same amount of sulfur, they would scatter less sunlight and would fall out of the atmosphere faster. We may have to inject 10 times as much sulfur, or even more, and this would be very expensive and impractical. Prof. David Keith later verified our estimates of the cost of airplane injection of sulfur into the stratosphere.

Prof. Keith has recently made a case for SRM climate engineering, but I beg to differ. His book is entitled A Case for Climate Engineering, so I title this essay "A Case Against Climate Engineering," but I need to emphasize that it is only one of many potential cases. We need much more research before we can decide on whether to ever implement human control of Earth's climate on purpose, to make sure that the risks are much less than the risks of not doing it, and we are very far from that point now. My argument is against implementing climate engineering now, and particularly in the way suggested by Prof. Keith.

The Risks of Climate Engineering

If SRM climate engineering could be implemented (which is a big question, for reasons explained above), it would have the following benefits:

But I have identified at least 26 possible risks of stratospheric SRM:

We need more research to understand the risks of SRM compared with the risks of not doing SRM so that society can make informed decisions in the future about implementation. But how should we do this research? I support indoor research, using computer models of the climate system and studying the impacts of past volcanic eruptions and of ships on clouds. But outdoor research needs strict governance to prevent dangerous pollution in the name of science. And such a governance system does not now exist.

In A Case for Climate Engineering, Prof. Keith suggests we gradually ramp up a stratospheric cloud, checking as we go along for negative impacts. But this would not work, given the natural variability of the climate system. One of the potential problems with SRM, as seen in climate model simulations and responses to previous large volcanic eruptions, is increase in drought. But the climate system is quite noisy, chaotic, and variable, and there are always droughts somewhere. Because of this, we would need many decades to see whether drought frequency has been changed by SRM implementation. We could not adjust it as we go along without excellent climate models to tell us what the climate would have been without the stratospheric cloud. And if we have those models, we can use them for the experiment and have no need to do it outdoors.

Furthermore, it's not hard to imagine a country suffering droughts or floods blaming it on the geoengineers and demanding that it stop now. That they could not prove it would be beside the point. If it were halted at once, we would have faster and more dangerous climate change than we have now without geoengineering. For these reasons, such a large-scale deployment of climate engineering, whether labeled an experiment or actual implementation, will produce unmanageable governance challenges.

Some experiments are much too risky to do outdoors on the only planet in the universe known to sustain life, with nuclear weapons testing being a prime example. Climate engineering research needs to remain indoors (in data studies and computer simulations) for a long time before it ever makes sense to do on a large scale outdoors.

The world has the resources to solve the climate change problem. But we need to start now. If we divert resources that are currently going into military budgets and continued fossil fuel infrastructure, we clearly can do this. There are tipping points in human behavior, and we need one now to stop global warming so we don't end up having to consider much worse problems with an engineered climate system.