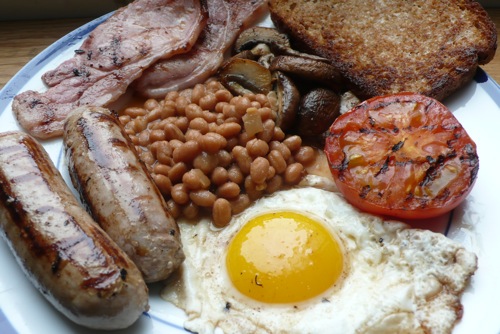 Rollerbladers and sectional couches aside, there are few things as unfashionable in modern Manhattan as hearty breakfasts.

On weekdays, convenience is king: New Yorkers favor smoothies, breakfast bars, anything that you can ingest while simultaneously tying a necktie, writing an email, and hailing a cab.

As for the weekends? Sure, the Big Apple might be known as the city never sleeps and always brunches, but look closely at those morning meals and you'll see bistro tables littered with coffee press pots, yogurt-granola parfaits, fruit cups, egg white omelets, and fresh-squeezed fruit juices. These are the dainty, heart-healthy stuffs of a modern day breakfast, perfect fuel for an afternoon spent doing nothing more strenuous than the Sunday crossword puzzle.

Weekend mornings tend to go a little differently in my household. I live with an Englishman, you see, one with a hummingbird metabolism who likes to clock 50 miles on the bicycle before I'm done hitting 'snooze.' Shopping for our groceries is like provisioning an army, and after a man-sized workout, attempting to sate him on yogurt, fruit, toast, or anything of the sort is an exercise in futility. He could eat like that all day, taking down every last blueberry and grain of muesli in the house and still rummaging through the fridge for more. Luckily I've hit on a solution: the Full English Breakfast, which is my domestic equivalent of throwing King Kong a commuter train to gnaw on.

A Full English Breakfast (a.k.a The Fully Monty, a.k.a. A Fry Up) consists of some combination of fried eggs, bacon, sausages, tomato, toast, black pudding, potatoes, mushrooms and baked beans. Everything but the baked beans can (and should!) be cooked in a cast-iron skillet, in concert with lots of oil and butter, then slopped onto a plate in a messy, steaming heap. It's a fat and protein-laden meal that came into existence around the time of the industrial revolution, ideal if you're going to spend your morning down a mine shaft, in a textile mill, or similar. In my estimation it sits up there with strawberries & cream and marmalade as Britain's greatest culinary gifts to the world. "The only way to eat well in England is to have breakfast three times a day," W. Somerset Maugham once said. Quite right.

Fast-forward to modern times, and we all know why we shouldn't eat a Full Monty -- it's calorie-rich, heavy on meat and grease, and light on vitamins and minerals. It's the kind of thing that would make Mark Bittman, he of veganism-till-six and Meatless Mondays, awake in a cold, shaky sweat. I can assure you that Kate Middleton wouldn't touch a Full English Breakfast with a ten foot polo mallet, lest she absorb some of the wafting bacon grease through her pores, daahhling.

But there are also plenty of good reasons why you should tuck into a big fry up every so often -- actually, just one big reason. Because it's so delicious. It's decadent, excellent recovery food after a marathon (of both the running and drinking varieties), and manages to put a large, goofy smile on my face until dinnertime. Nutritionists have long been encouraging us to have our biggest meal of the day at breakfast. I can't be positive that they're talking about a big plate of fried things, but still.

The bread, eggs, tomatoes, baked beans, and mushrooms should be easily found in your local grocery store. Black pudding is optional. Sausages should be 100% pork and bacon should ideally be back bacon -- our American bacon is made from pork belly, but traditional British and Irish bacon is made from cured pork back (also called pork loin). I mail order big quantities of both from an excellent Chicago-based purveyor called Spencer's, and freeze the extras.

Heat a cast iron skillet with a splash of canola oil. I like to cook the bacon and sausages over very moderate heat (the sausages will take longer then the bacon), then turn up the heat for the mushrooms and tomatoes, which need a good strong sear. Toast can either be fried in the bacon and sausage fat or done in the toaster. Beans can be heated on the stove or in the microwave. Finish up by melting a pat of butter and frying the eggs, flicking a little of the hot fat over the yolk to seal it. Divide all the goodies between two plates, and supplement with a steaming cup of coffee and a glass of cold orange juice.