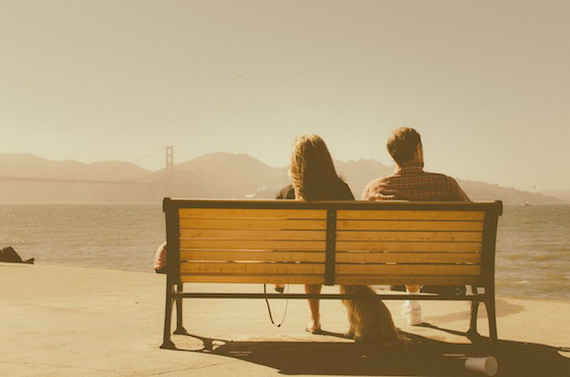 Recently a reader wrote to me and asked me a question about something I know a lot of people struggle with. How do I know when I'm taking things too personally?

Sometimes you simply need to accept that people are suffering and are trying to bring you down because of it. Other times you need to draw a line and let people know that what they're doing isn't working for you.

Instead of being theoretical I thought I'd present the reader's situation as a case study of how I might coach her through this question. For the purpose of this case study I'll refer to the reader as Ms. K and her friend as Ms. D.

In the first scenario this Ms. K and her friend were discussing scripture. She related to Ms. D how her preacher said that because not eating pork and keeping Sabbath was only required in the Old Testament, as a Christian she didn't need to follow these rules.

Ms. D then asked her if she thought the preacher was going to hell because of his view? An argument ensued, in which Ms. D repeated again and again that she had gone to college all her life but Ms. K clearly didn't have a clear understanding. Ms. K interpreted this as being sarcastic and as a dig against her own lack of a college education.

This is my best guess at what's going on between Ms K. and Ms. D.

Observation 1: Your friend feels judged or annoyed by you
My guess is that there is something about the way you were expressing your opinion that she had a problem with. (Knowing you from the conversations we've had I'm not surprised by this because you are a very passionate and outspoken person, which is can be wonderful but can also cause problems).

When you express your views passionately, other people may sometimes imagine that you're not leaving any space for their views. They may see you as being cocky or arrogant. And people usually don't like this. (I know this from my own experience of being an outspoken person).

When Ms. D asked her question about the preacher going to hell, she was really saying, "Do you think he's going to hell for this because you sure seem to have a lot of opinions on what people should and shouldn't being doing. Who died and made you the Apostle Paul?"

When people start asking you these kinds of questions it's probably worth checking in to see how you've been expressing your point of view. If you've been very passionate, then they may be hearing your rightness and their apparent wrongness.

If you want to avoid coming off this way you might try adding a caveat to your opinions: "Well it's just my opinion and I could be wrong but here is what I think . . . , I think this . . . but I'm curious to know what do you think this verse means?", or "I've been struggling with this question and I came up with this answer . . . for me it's so satisfying because it makes me feel safe knowing that I am doing my best to be a good Christian."

Of course you shouldn't always do this. Women tend to over qualify when they speak so I'm not suggesting you do this all the time, but with this friend it may save an argument.

Observation 2: She's baiting the crap out of you.

Here's the tricky part. She may or may not have had a good reason to get annoyed by you. But whether or not she does, the reality is she's baiting you. She's knows exactly which buttons to push and when.

She's knows you are sensitive about not having a college education, so when she feels like you are being too big for your britches she decides to resize them for you.

This is common but also really lame. If she does this often my guess is that it's a skill she learned long ago and won't stop. So what do you do?

Well you have two options that I see:

Option 1: You kindly call her out on it.

You might say,
"Hey Ms. D when you say that to me it makes me feel sad because I'm imagining you think less of me because I don't have a degree. I'm guessing maybe you're saying it because you're feeling annoyed by me and I'm curious if instead of doing that you just tell me you're annoyed by me and why. Our connection is important to me and when you say that it erodes our relationship and I'd like to be friends with you and not quarrel. "

Here's the trick, you have to be vulnerable, honest, and willing to see your own fault in the situation. If you're more concerned about proving you're "right" than you are about connecting with your friend, then this will sound false and she'll pick up on that.

Option 2: Stop hanging out with this friend.

When you're trying to build a business and a life there are always going to be negative people who are going to be trash talk you, your views, and your abilities. These people will not help you grow and get ahead.

I don't know if this friend is that kind of person or not, but I do think you need to take a long hard look at your friendship and decide whether or not she helps you more than she hurts you.

If it's the former, then be honest and vulnerable with her. If she's the latter, then don't be unkind but choose to spend time with your fans instead.

Ms. K (the reader) and Ms. D (her friend) are talking about business, and Ms. K is offering Ms. D advice on what she can do to make more money. When Ms. K does this, Ms. D ignores the advice and continues to complain about things in her business that are hard for her. Ms. K continues to offer Ms. D advice, even though she's not responding to it. Ms. K then tells Ms. D that though she is not trying to take a jab at her Ms. K has never been in business and until she's been through what Ms. D has, she won't understand what it's like.

So what's going on here?

Observation 1: When your friends complain, they want empathy not advice.

Before you do anything else, show your love by offering them empathy and reflection.

If your friend is complaining about how no one wants to pay for anything, you simply respond by saying, "Wow it sounds really frustrating to work so hard on something and feel like people don't appreciate it. Is that right?"

Just reflect back what you think you heard and do so from a place of curiosity. Of course this is an art that takes practice, but it's totally worth it.

People tell me I'm really easy to talk to and I make them feel safe. A big part of this is because I work at reflecting and giving empathy first.

Don't offer a story of your own, don't collude with her and say that her clients suck, don't say you feel really bad for her, don't quibble over how she heard something the wrong way. Simply listen and reflect. That's what she wants because that's what we all want, to be seen, heard, and loved.

Observation 2: Stop giving advice to people unless they give you permission first.

You may give the best advice in the world, I certainly think I do ;) but even if you have the perfect advice, ask for permission before you give it.

When we give people advice, you think you're saying "I love you, I want to help you, and if you try this thing I think other people will see how amazing you are."

The problem is they hear: "You're an idiot and if you'd only do what I tell you, then you wouldn't be screwing up so much but you probably won't do that because you're not as smart as me."

People want love not advice. Sometimes after giving people love and empathy, you can offer advice, but only if you ask permission.

Whenever you notice you have advice for someone simply say, "Hey I have an idea I think might help you. I'd love to share it with you, but only if you're open to it. What do you think?"

Then at least you're asking them if it's alright to give them advice and they'll be much more likely to hear it as loving advice.

Talking to people is hard and not being a jerk while you do it is even harder. Your friend may be a sweet person who sometimes gets turned off by your passion and outspokenness. She may also be a negative person who looks for any reason to put you down.

Only you know what the truth is. As with all things in life when you take something personally, there is often unskillfulness on both sides.

Usually you've done something that someone else has taken badly, and there is something you can do to be kinder, wiser, and more compassionate. It's also true that your friend may be choosing to hear you with ears that always find what's wrong and bad.

Your best friends hear your best self even when you don't, and call you out when you're being a jerk. But no one can tell discern which it is which except for you.

So whenever you take something personally:

First let go of being "right".
Look at how you could have been kinder in the situation. Ask yourself about the part you played in the quarrel. Be open, vulnerable, and honest.

Next examine your relationship
Ask, "Does my friend only do this when I'm unskillful, or does she do it all the time?"

If it's the former, then work with her. Tell her how you feel while also taking responsibility for your part.

Life is too short to spend time with people who make you feel like crap.

Unless of course they make you feel like crap because they lovingly reveal the truth of your own need to grow. The friends who love you, are kind to you - but make you uncomfortable - that push you to be better. Those people are friggin' gold. Love them and keep them close.

Image from Unsplash, by Charlie Foster.

Toku is an executive coach to the most influential people on the internet. His clients include everyone from the creator of Zen Habits to a serial entrepreneur who's sold million dollar businesses. To start learning the right mindset and skill set you need to become a powerful enlightened leader join his free newsletter.