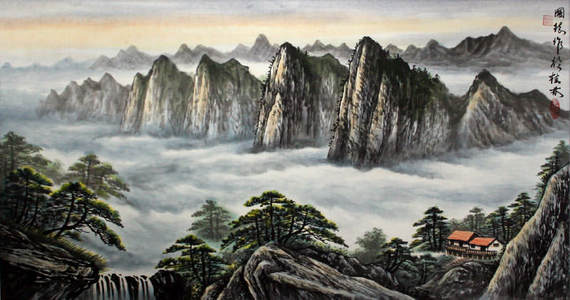 When early Catholic and Protestant missionaries came to China in the 16th through the 19th centuries, they found that something called the "Mandate of Heaven" (天命) was frequently mentioned in the early Confucian classics (such as the Book of Documents and the Classic of Odes). Consequently, some of them thought that Confucians believed in the same god as the God of Christianity. It is hardly necessary to say that they made a terrible mistake.

The Chinese character 命 is a combination of 口, mouth and 令, command. The literal meaning of 天命, often translated in English as the "Mandate of Heaven," is thus premised upon a certain degree of personification of Heaven. After all, if Heaven is not a person, how could it announce any commands to its people? However, as virtually every religious comparativist inevitably tends to be, these early missionaries were biased in their understanding of 'God.' They thus tried to grasp Confucianism through a Christian lens, and so it is not surprising that they tried to find a monotheistic element in Confucianism and remained blind to the fact that Confucianism, during the process of its formation, was actually moving away from monotheism to mono-non-theism. This means that 'Heaven,' in the mainstream understanding of Confucianism as it was molded by Confucius, Mencius and Xunzi all the way up to the Song-Ming neo-Confucians, is not a person, but an all-encompassing, constantly creative cosmic acting without any actor who is behind the scenes.

One important reason which propelled Confucianism away from a monotheistic type of religiousness was theodicy. The religion of the early Zhou dynasty (approximately 1046-256 B.C.E) was pretty much similar to the Abrahamic religions, especially the stories from the Hebrew Bible. Heaven is Lord, and kings ought to obey moral laws enacted by Him. Obeisance will be awarded and violations will be punished. If an immoral king did not continue to take good care of his people, he would lose his Mandate of Heaven, and his dynasty would then be overthrown. This theology was employed by the Zhou dynasty to explain and vindicate their succession over the prior Shang dynasty. However, this theology is dramatically undermined if, no matter how diligently kings pursue moral self-cultivation, their dynasty still continues to decline. This happened to the Zhou dynasty and its kings after 771 B.C.E, when an ethnic minority invaded and plundered Zhou's capital, killed King You (幽王), and forced the royal court to relocate in another city far to the East. In this period, which is replete with political turmoil and unattended natural disasters, we find plenty of verses in the Classics of Odes (詩經) expressing individual laments in the face of divine injustice. These are very similar to Psalms in the Hebrew Bible, as, for example, when the text quotes complaints such as, "Since I have not been immoral, why has Heaven punished me?"

There are two solutions to this conundrum of theodicy, and they generally are what demarcate the three Abrahamic religions from Confucianism. The seemingly unjust divine punishment can be conceived to be a temporary 'test' of the people's righteousness and faithfulness: if righteous people cannot be rewarded immediately, they will be rewarded in the afterlife, the final Day of Divine Judgement. Alternately, Heaven was no longer to be conceived as a personal God: Although there are values and attractions in Heaven which are worthy of human worship, the Heavenly creation in this case is not conceived of as having any anthropomorphic sort of plan, purpose or agency. In this case, good and evil are defined primarily from the perspective of human beings and not from the perspective of God. Thus, if human beings themselves do not reward goodness, then good in its reciprocal form will remain unrewarded. By the same token, if humans do not punish evil behavior, then evil will remain unpunished.

This type of human religiousness may be expressed as 'religious naturalism + humanistic ethics' and replaced the pre-Confucian monotheism of the early Zhou dynasty. This process began with Confucius, garnered its mature form in Mencius and Xunzi, and finally achieved a systematic elucidation in Song-Ming Neo-Confucianism.

At the same time, a re-formulation of the concept of ming (命) was underway. In general, Confucianism employs three meanings for the term ming. The first meaning of ming is talent (稟賦). Everyone is talented, one way or the other. It is primarily manifested by the deep, even uncanny, interest a person often shows toward a particular realm of human life. It is also illuminated by the ease, passion, and happiness that a person feels when he or she consistently pursues his or her interest without any concern for reward. In Confucian terms, everybody is born in a specific place and time, and thus their mental and physical conditions are formed by a specific portion of the cosmic matter-energy (qi, 气). That's the reason, in this view, that people are talented in different ways. Understood as such, one cardinal function of education is to help people find their own special talents. Confucius is quite excellent at mentoring his apprentices in discovering and fostering a variety of talents (Analects 11.3). In addition, Confucius teaches that we ought to use our talents to serve multiple purposes and to offer good to all human beings, rather than behaving like a utensil, merely serving a fixed range of purposes and thereby being unable to broaden the value of their talents (Analects 2:12).

The second meaning of ming is fate (命運). No matter how talented a person may be, he or she can only be talented in certain ways. Also, no matter how consistently a person pursues his or her talent, the degree of his or her accomplishment is restricted by the time, the environment and by his or her personality. In other words, the portion of cosmic matter-energy that Heaven gifts to each person also limits them. Consequently, humans have to accept the radical contingency of human existence, and to find ways to reconcile their always finite life-situations with their ideals, many of which may be of infinite extension. In this regard, Confucianism teaches us to begin with what is nearby. We need to begin by trying to promote and harmonize the growth of our own persons, our own families, our own communities, and then gradually expand outwards to the world so as to enrich the value of all human lives. In other words, Confucianism acknowledges the realities that constrain human life.

Nevertheless, these constraints can never determine human life. This leads to the most important third meaning of ming as mission (使命). Among all the talents with which Heaven endows human beings, the most valuable one is an irresistible capacity to persist in creativity, situated in the human mind-heart (心). Confucians believe that no matter how constraining the situation is, the human mind-heart can always find ways to transform it in some degree for the better. In the terms of the early Confucian text, Zhong Yong, the mission of human life is to assist in the cosmic creation that remains uncompleted by Heaven and Earth, and thus human beings are seen to form a triad with Heaven and Earth. This means that humans have a responsibility to manifest the One principle of the Heavenly creation in a specific humane (仁) way. Therefore, when we feel deeply frustrated about our lives, the best way to rebound from distress is to exert our unique talent to promote the well-being of other people who are near at hand: our families, our communities and our friends. For Confucianism, the personal creativity which is to be infused into the universal well-being, defined by a widening range of human-human and human-cosmic relationships, is the ultimate meaning and power of human life.

In a word, Confucianism is neither voluntarism, extolling the infinite compass of human free will, nor is it fatalism, denying any possibility for human creativity. In the Confucian view, human beings are endowed with various talents. We learn, interact, fulfill and finally improve our 'fate,' expressed as a series of constraining realities. During this process, the human mission to assist in the cosmic creation of Heaven and Earth is an ideal which stands as an eternal allurement, always going beyond any fixed form of human creativity. Understood in this way, to be a Confucian is to be 'destined' and 'commissioned' as a non-violent warrior and fighter for the realization of dynamic harmony in the world. Relying upon our various unique talents, let us continue to fight against and break through any constraining life-situation, and thereby to create new forms of dynamic harmony to serve the common good of all human and cosmic beings!