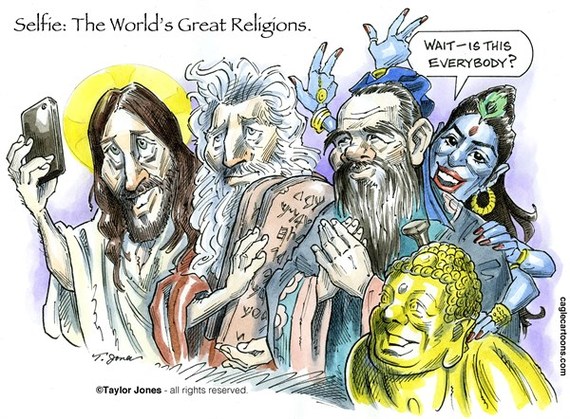 In the early 15th century, several Confucian missionaries embarked with Zheng He's fleet, which was being sent out by the Ming emperor, Cheng Zu, both to demonstrate China's national power and to build up international friendship with foreign countries. Relying on Zheng He's incredible navigational skills and his massive ships, these missionaries reached every major country in southern and western Asia, eastern Africa, and the Cape of Good Hope, eventually arriving at their final destination, Europe. Their primary goal was to convert each non-Confucian, that is, each barbarian nation to Confucianism in order to spread Chinese civilization and also to bring, according to their view, ultimate goodness to everyone under the Heavens. But in order to do this, the missionaries first needed to understand the kind of education European people traditionally received. They found that in Europe everyone talked about Jesus. Jesus' not so decent image, a nude, bloody and somewhat mutilated body crucified on a cross, was hanging everywhere and was venerated by almost everyone. As a result, the Confucian missionaries thought that since Jesus seemed to be the European's sage, this tradition should be named, 'Jesusism.' Meanwhile, the missionaries reported this to the emperor of the Central Kingdom, and accordingly, the Chinese came to know the major teaching of Europe as Jesusism. However, these early Confucian missionaries' efforts in Europe were not very successful. The Jesus believers refused to admit that Jesus was merely a sage, and it appeared that, to them, Jesus was much more than a sage. But because Chinese civilization maintained its technological and economic hegemony in the world from the early 15th century until the present, Chinese became such a powerful language that everyone in the world continually talked about 'Jesusism,' no matter whether 'Jesusians' approved of this name or not. At the same time, Confucianism spread into every corner of the world, and entertained, sometimes harmonious and sometimes conflicting, relationships with various indigenous traditions.

Yes, you are right! This is a fairy tale, a total fiction! But if you exchange 'China' for 'Europe,' replace 'Confucianism' by 'Jesusism,' and switch all the other relevant historical factors in this fiction, then I have been describing exactly what happened in the case of 'Confucianism'!

Confucianism is a misnomer. It was created by early Christian missionaries for the purpose of comparison and, especially, of conversion. Although Christian missionaries created a number of names for the now so-called world religions, the term 'Confucianism' is especially unfortunate since it says nothing at all that is essential about the tradition that the name purports to describe.

We can see that this is so by making a comparison with other major world religions. In Christianity, 'Christ' means 'the anointed,' or 'the savior.' This is the Greek translation of the Hebrew word, 'Messiah.' For Christians, Jesus is the Christ, because he is thought to have cleansed the original sin of human beings through his crucifixion, and thus to be able to bring salvation to all the world. Similarly, in Buddhism, 'Buddha' means 'the awakened' or 'the enlightened.' For Buddhists, Siddhartha Gautama is a 'Buddha' because he has attained enlightenment. His teaching is thought to be capable of awakening people, allowing them to understand the origin of human suffering and helping them to transcend the otherwise endless cycle of reincarnation, the samsara.

By contrast, if we follow the name 'Confucianism,' and claim that Confucius is a Confucian, what could this mean? It is as tautological as to say a dog is doggy and the sun is sunny. I am quite skeptical concerning whether any Confucian practitioner approves of this name.

So what is the Chinese name for 'Confucianism'? In other words, how would a contemporary Confucian wish to identify himself or herself when following this tradition? It is Ru (儒, pronounced like 'zoo,' but in an ascending tone). Given this name, it makes sense for Confucian practitioners to say that Confucius is a Ru because, similar to 'Christ' and 'Buddha,' Ru is not only a name. It also represents an ideal for human life. In this sense, to know why Confucius is venerated as a Ru is to understand the essential teaching of 'Ruism,' which in my view is the correct name to replace 'Confucianism.' So, what is this ideal? And what is the meaning of the Chinese character '儒'?

Although the division of ancient Chinese thought into named schools, such as Ruism, Daoism, Legalism, etc., was brought about by intellectual historians in the Han Dynasty (202 BCE-220 CE), the philosophical debate among major Chinese thinkers who were designated by these names had already begun several hundred years earlier. Mencius (approximately 372-289 BCE) considered that his own thought belonged to the school of Ru (Mencius, 7B). In addition, separate chapters entitled, "The Influence of a Ru" (儒效) and "The Deeds of a Ru" (儒行) are contained in Confucian classics such as the Xunzi and the Book of Rites, which were written during approximately the same time period as the Mencius. In other words, among various schools of ancient Chinese thought, the strong self-designation of Confucius' students as Ru began shortly after Confucius passed away. If we now pay attention to the reason that the tradition selected the character 儒 (ru) to identify itself, we find there are two major meanings of 儒, both of which are warmly endorsed by Confucian practitioners.

First, rou (柔), a closely related character, means 'being soft'. Why soft? This meaning relates to the sociological status of the term Ru before the time of Confucius. At this time, as a social order, Ru referred to a variety of professions: shamans, diviners, those who prayed for rain, dancers, those who presided over religious ceremonies, etc. In pre-Confucian China, this rank of people possessed one key skill which was thought by early Confucian thinkers to be of the utmost importance to human civilization: knowledge of ritual (li, 禮). From a Ruist perspective, the relationships among human beings and that between human beings and non-human nature are not immediate. Quite often, these relationships are, and ought to be, mediated by a variety of li: language, art, ceremonies, social etiquette, political institutions, technology, etc. In this way, li, although conventionally translated in English as 'ritual,' actually refers to all possible means of human civilization, and thus it is fair for us to paraphrase the Ruist concept of li to refer to all 'civilized symbols.' For example, faced with a beautiful, charming woman, no suggestion would ever be made that a civilized man should be driven immediately by his sexual impulses to grab her, kiss her, and touch her, without any scruple. On the contrary, civilized human sexual relationship is always mediated by kinds of symbols: a smile, particularized eye contact, intimate language, and probably also messages, emails, heartfelt gifts, etc. Finally, a civilized, more ideal result in this case for humans may be that even if the woman fails to accept the man, both must still show basic respect for each other, and thereby maintain a degree of humaneness throughout such interactive processes. Understood in this way, the uniqueness of civilized symbols consists in this, that as media, they are used by human beings to represent what happens in their subjective inner worlds in order to engage the objective realities which exist outside that inner world.

Therefore, li, according to this broad Ruist understanding, is a non-violent, uniquely human, way to facilitate human to human and human to nature relationships in order to advance human growth and to achieve the condition of dynamic harmony (he, 和) in every domain of human life. In a word, the 'softness' connoted by the character 儒 implies the essential and ideally non-violent nature of human civilization.

Secondly, ru means 'to moisten' (濡). In order to grasp the significance of this meaning of ru to Ruism, we must first understand a traditional Chinese idiom, 相濡以沫 (xiang-ru-yi-mo), which can be roughly translated as '(fishes) moisten each other using their saliva.' The idiom refers to the following story: when a river dries up, fish become stranded in the river bed. In order to survive in this difficult situation, the fish spit saliva at each other, moistening and thus bringing relief to each other's bodies. Understood in this way, a Ru, a 'Confucian,' was metaphorically thought to be able to 'moisten' people's bodies because the Ru, by relying on their knowledge of all the resources of human civilization as well as on their own 'practical moral influence' (de, 德), are able to nourish people's lives within human society. In comparison to other approaches to ethics in the West, this Ruist understanding of morality points to its distinctively holistic nature: if I am moral, I can nourish my life and the lives of other people, which thereby includes a significant bodily dimension. In other words, if I am moral, I will become healthy. In fact, based upon my previous analysis of the meaning of 'dynamic harmony' (he, 和), this holistic approach to Ruist ethics is quite understandable.

In biological terms, a condition of dynamic harmony can be defined as one of 'energy equilibrium,' as when a biological entity employs the least amount of energy to exert optimal biological functioning, at the same time attaining a symbiotic relationship with each of the other entities within its local environment.

In this sense, if a Ru, by employing all kinds of non-violent civilized symbols, is able to bring a condition of dynamic harmony to his or her community, he or she is actually creating a healthy ecosphere within which all kinds of life benefit, nourish, and thus "moisten" each other. In this way, the character of 儒, which is made up of two parts, ren, 人, meaning 'a human being,' and xu, 需, meaning 'need' or 'want,' can be interpreted to refer to someone who is 'a needed human being.' But why should a Ru be needed by other people? It is precisely because he or she has command of the essential resources for human civilization, and so is able to 'moisten' people's lives and thereby create those virtuous ecospheres which are needed within all domains of human society.

If we now combined these two meanings of Ru, 'being soft' and 'to moisten,' we can recognize that the standard meaning of Ru, as it is received in the Ruist tradition, is 'non-violent transformation.' To be a Ru is thus to be commissioned as a non-violent warrior and fighter who employs every resource of human civilization toward the realization of dynamic harmony in the world. A Ru is someone who tries to transform the world into an all-encompassing symbiotic ecosphere by employing his or her own personal moral cultivation. As a consequence, please do not forget that Confucius is not a Confucian; he is a Ru. And Confucianism is not Confucianism; it is Ruism. I hope that everyone who reads this article will help to spread this message, and will also commit to realizing the Ruist ideal in every dimension of human living.