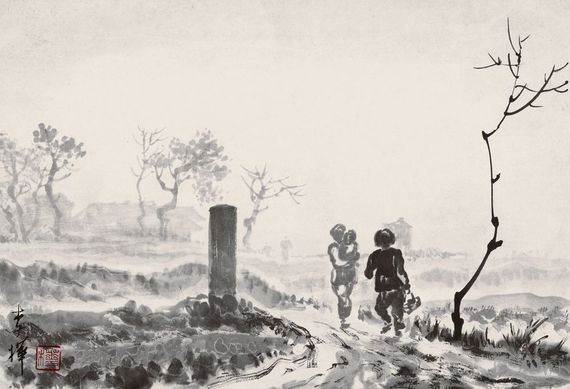 According to China's Lunar Calendar, the Clear and Bright Day (清明節) will be on April 4 this year (2016). Traditionally, this is the time for families to visit their ancestors' tombs to perform a ritual of 'ancestor devotion' (祭祖). For this reason, Clear and Bright Day is also translated into English as 'Tomb Sweeping Day.'

If there is a single ritual which speaks to the resilience of the Ruist tradition, it is 'ancestor devotion.' Its history began long before the time of Confucius [551-479 BCE], although the role of Confucius and his Ruist school may be seen as having educated people about the spiritual and ethical importance of this ritual and thus to having transformed people's minds in this regard. Even during the hardest times for Ruism, the early 20th century when Ruism was accused by China's westernized intellectuals of being culpable for the backwardness of Chinese society, the performance of this ritual remained ubiquitous. This is the case, not only in China, but also for the greater part of South and East Asia which were influenced by Ruism, and also to a certain degree for the Chinese diaspora throughout Western societies. Today, some sociologists have even argued that if the performance of 'ancestor devotion' can be seen as a sign that the devotees have affiliated themselves to Ruism, Ruism may be counted as the largest religion in the world with the largest number of adherents.

So, why is this ritual so powerful? The reason is clearly related to 'the Ruist view of death.' In a succinct way, I can summarize this view as follows: a Ru lives every moment of life under the shadow of death and is continually trying his or her best to create a condition of dynamic harmony within evolving life situations. There is no doubt that, from a human perspective, disharmonious factors are always present in the world. But the ideal of continually realizing dynamic harmony always stands front and center. That's the reason I use the phrase 'continually trying one's best.' In this sense, the image of 'a non-violent warrior' who fights for harmony up until death may be seen as a portrait of the 'vertical' dimension of a Ru's life, since it announces a sort of existential constant during each moment of life. In this vertical view, "If one hears the Dao in the morning, one can die at ease in the evening" (Analects, 4:8), since every moment of a Ru's life is virtually the same as every other. However, in a horizontal view, the target of a Ru's life is to achieve 'cultural immortality.' Through an arduous process of moral self-cultivation, a Ru tries to accumulate his or her merits in his or her words (立言), works (立功) and moral worths (立德) so that he or she will be able to make a great contribution to human civilization, and thus to yield cultural influences which after death do not decay over time. Understood in this horizontal way, the ritual of 'ancestor devotion' is a distinctly Ruist way for ordinary people in their households, in their family clans and in their local communities to practice the Ruist teaching concerning cultural immortality.

Three key points still need to be explained in order to avoid any possible misunderstanding about the purpose of this ritual. First, solidarity and order to be brought to one's family, and agreeable effects to be brought to every individual's moral self-cultivation, are the aspects of this ritual which are most emphasized by Ruism. For instance, during a performance of the ritual, certain rules must be followed, which demand appropriate reciprocal interactions among family members based upon their ages and status differences. One's ancestors' deeds and virtues must be memorialized and appreciated, as they will have set moral examples for their descendants to follow. The eldest in each family, especially, must perform the ritual sincerely so as to demonstrate the virtue of 'filial piety' (孝) toward the ancestors; doing so is essential if these elders intend that other family members continue to practice this virtue towards themselves. Furthermore, a cultural consciousness deep within the ritual performers is the hope that their own lives will also be memorialized by their offspring, generation after generation. Accordingly, everyone must try their best to become 'good guys' to protect against a case in which nothing about their life turns out to be worth memorializing.

Secondly, if we take these factors into consideration, we can understand that the 'blessing' which people hope to receive during the ritual is not from some kind of 'petitionary prayer,' which thereby must assume a certain degree of deification of the ancestors. Offering a petitionary prayer would indicate that people think that if they have provided outstanding offerings to the spirits or ghosts of the ancestors and have behaved well during the ritual, that then they will be rewarded; otherwise, the ancestors might punish them. This sort of 'ancestor worship,' which is not the same as 'ancestor devotion,' may have been prevalent before the time of Confucius and even among uneducated people today. However, by the time Confucius' Ruist school had become the most powerful educational engine of ancient China, the ritual was no longer construed as 'worship,' but rather as 'devotion.' In this regard, the chapter, 'Ji Tong' (祭統, the regulation of sacrifice), in the Book of Rites (禮記) is edifying. It says,

"When a worthy (賢者) pursues the ritual of ancestor devotion (祭), he will be blessed. However, this blessing is not what the vulgar people call a blessing. Here, blessing means perfection. And perfection means the complete and natural discharge of all one's duties."

In other words, Ruists believe that people can be blessed through the ritual of 'ancestor devotion' because they have attuned themselves to all the patterns and principles which make an entire family fit together in the way in which it was historically understood: as following the virtues of the ancestors, expressing feelings of gratitude and filial piety, cultivating oneself well here and now, and expecting cultural immortality in the future. We can now understand that realizing 'dynamic harmony' within a household refers to performing this ritual par excellence.

Third, these insights remind us to clarify one important question which people usually ask when they read the Analects and begin to approach Ruism for the first time: Did early Ruists believe in ghosts, spirits, or any other sort of supernatural beings who possessed some disembodied form of consciousness? If we read the Analects along with other major Ruist classics compiled around the same period, the answer is a definite 'No.' For in Confucius' time, people believed that human beings had two souls. When a human died, one soul called hun ascended to heaven, and the other soul called po descended to earth. Accordingly, a special ritual needed to be performed following a person's death in order to call the ascending hun back to the buried body and bring final peace to the deceased. However, as described in the chapter called 'Ji Yi' (祭義) in the Book of Rites, when Confucius was asked his opinion of hun and po, he said these are just two different forms of the cosmic matter-energy called Qi (氣). The one is stretching and ascending, and the other is returning and descending. In other words, when people die, their life force was thought to be transformed into two portions of Qi and thereby merged into the entire natural process of cosmic changes. Accordingly, no supernatural being need be posited to exist.

Cognitively, then, Ruism does not believe in any sort of afterlife. Emotionally, however, Ruists acknowledge that people express intrinsic feelings of gratitude and devotion towards their ancestors. In this sense, the ritual of 'ancestor devotion,' as construed by Ruism, is to create a distinctive 'subjunctive' space in which people are able to express their feelings and cultivate their morals without being required to assume any ontological misconceptions about what these feelings and morals ought to be devoted to. In other words, the ritual harmonizes people's emotional and moral needs along with their cognitive awareness in just the way described by Confucius: "When I perform the ritual of 'ancestor devotion,' I act as if the spirits of the ancestors were present" (Analects, 3:12). By the same token, Confucius also teaches us to "revere spirits and ghosts, but stay away from them" (Analects, 6:22). Both verses enlighten us by pointing out that we need to sincerely perform the ritual of 'ancestor devotion' as if these ancestors were alive for all the reasons mentioned above. Even so, we ought not to commit a cognitive error by allowing the idea of spirits and ghosts to interfere inappropriately with our lives.

In a word, although the Clear and Bright Day ritual is devoted to ancestors, it is mainly for the sake of living people and their futures. If we have correctly understood this ritual, we still have to wonder, especially in the case of Westerners, how should the ritual be performed in a contemporary context?

As for the more general question of how Westerners can adopt Eastern rituals in order to practice Ruism, I endorse a minimalist re-interpretive approach. This means that Westerners ought first to understand the Ruist teachings which underlie Eastern rituals, and then reformulate current Western rituals using the least effort which will yield an optimal Ruist meaning.

In this regard, my friend Benjamin Butina has done an unprecedented job of designing a 'Tomb Sweeping Ritual' (click here to see details) based upon Ruist philosophy as well as Western customs. Alternately, Westerners might choose some Western festival such as Father's Day or Mother's Day as their opportunity to perform the ritual. Different families could also design their own way to visit the tomb or burial site of their beloved ancestors on a regular basis. Or a national holiday, such as Veteran's Day in the United States, could be used as a way for local communities to pay tribute to deceased public figures.

In a word, the overall message of the Ruist ritual of ancestor devotion is that humans ought not to forget their family history. Only through learning, remembering and re-forming history throughout all its interrelated levels (personal, family, community, state, etc.) can people become part of history, thereby allowing human society continue to flourish in the future. Thus, as long as Westerners are able to understand and practice this message in whatever form of ritual feels comfortable and convenient, then they will be Ruist.