In October, she signed up for a course at the Studio School of the Virginia Museum of Fine Arts, with instructor Chuck Scalin, a Virginia Commonwealth University professor emeritus.

Through the lens of a three-dimensional altar to three people she's loved and lost, Rudy's worked her way through tragedy and grief -- and discovered beauty. 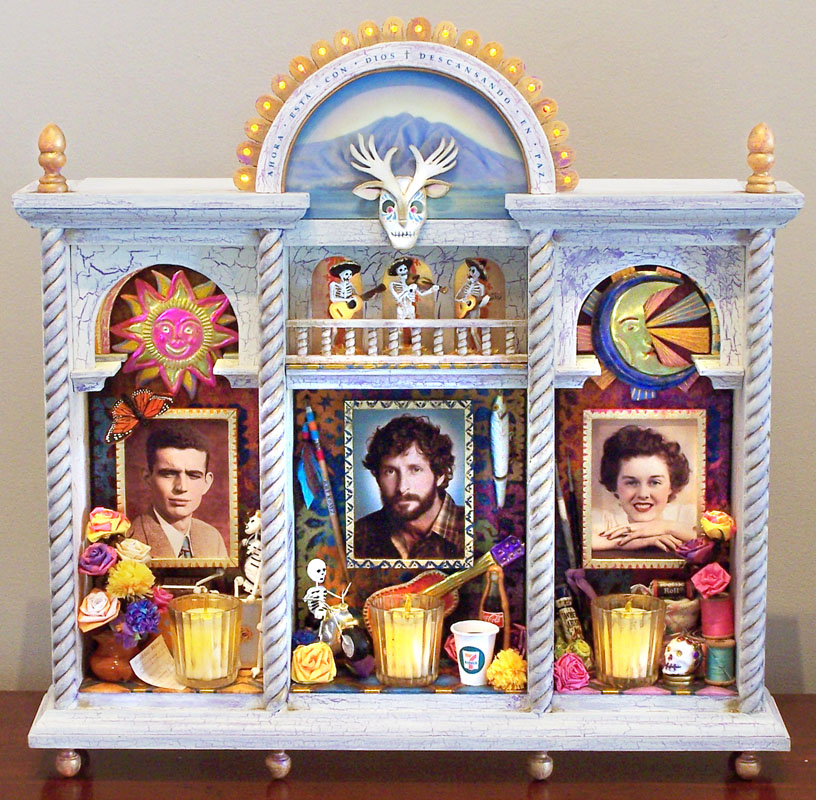 Her chosen medium draws strongly on shrines for the Mexican Day of the Dead, assembled in that country in early November to welcome home lost loved ones for a day. There, the altar is temporary. Rudy's, though, is different.

"This is an all-year-round welcome," she says.

It stands 24 inches by 24 inches, five inches deep, with three niches crowned by an arch and blessed by a deer, sacred to Mexico's Huichol tribe of pre-Columbian Indians. On the left is her father, on the right, her mother, and in the center, her husband. Surrounding each are symbols of the things they loved while here. 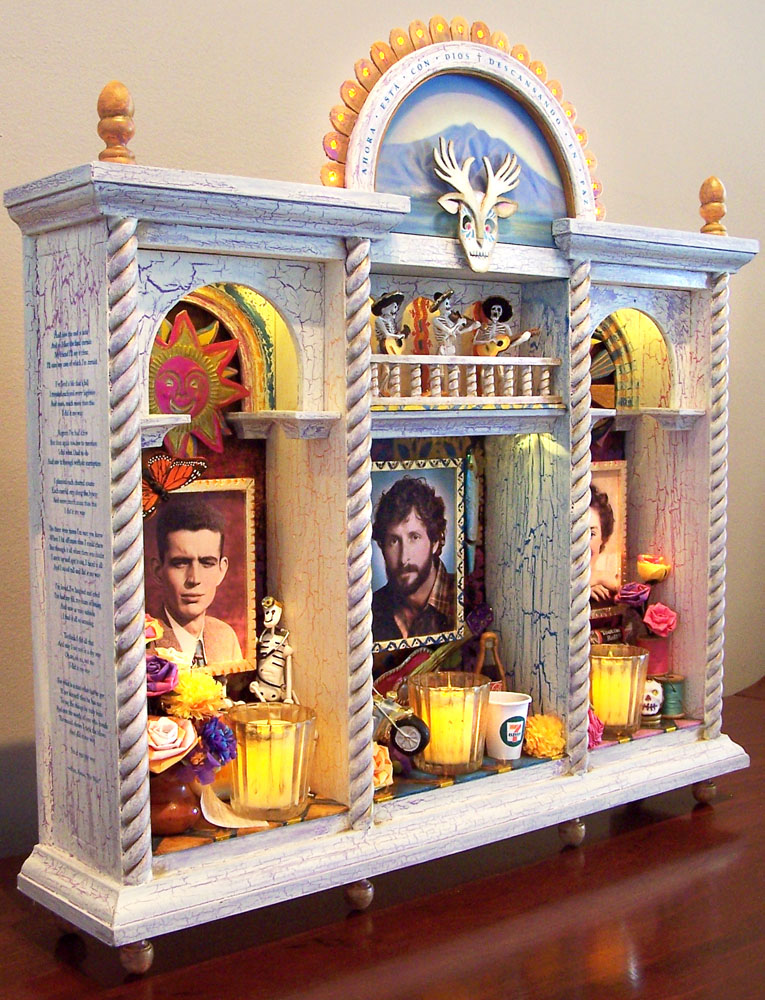 There are the sun, the moon, a Mexican mountain, a cup of coffee, a coke bottle, a fishing lure, a Tootsie Roll, a Hershey Bar, a paint brush, a few spools of thread, an abundance of pink and yellow roses, and a shaman's healing stick clearly marked RRI KoMZ -- an oblique reference to a secret society known as the Roto-Rooters International, Knights of the Mystic Zud Chapter.

In the niche occupied by a portrait of her father the doctor, a stethoscope-draped skeleton rests in a corner smoking a cigarette; next to a photo of her mother the artist is a tube of oil paint; below a color image of her bike-riding husband is a joyous skeleton straddling a motorcycle.

"In Mexico, the skeletons usually portray their occupations, or the things they liked to do," she says.

Above all three, a bare-boned mariachi band wails blithely away at two guitars and a fiddle. 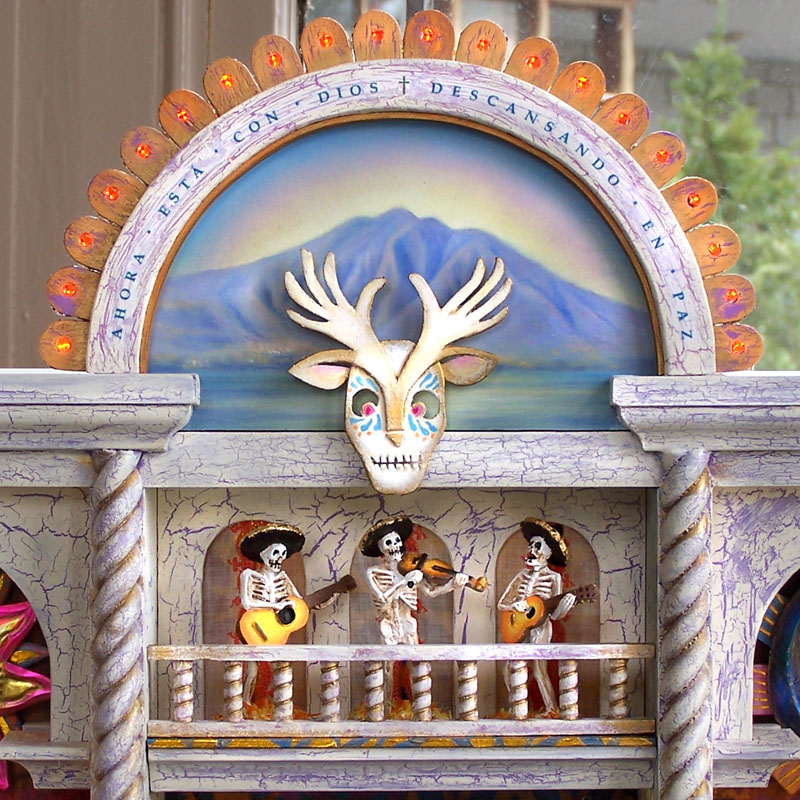 What began as an assemblage of photographs and writing became, at Scalin's urging, a reliquary. Then it was transformed into a means of dealing with loss and grief.

"Here, when we look at death, we talk about moving on and closure, which implies forgetting and putting aside," she says. "I like the Mexican approach -- it's not hands-off, but kind of embraces it. When you do that, it's accepting it, not shutting the door on it."

Which is, of course, the final stage in the grieving process.

"I didn't want it to be morbid or sad," she says. "I wanted it to be happy and joyful."

And she succeeded, partly by including poems and lyrics specific to each of the three. There are lyrics from "My Way" by Paul Anka for her father, and lines from Rudyard Kipling's "When Earth's Last Picture Is Painted" for her mother.

For her husband, she invoked a quote attributed to Carlos Castaneda by Tony Soprano's therapist, Jennifer Melfi, in Season 2, Episode 6 of "The Sopranos:

"Live every moment, like it is your last dance on earth." 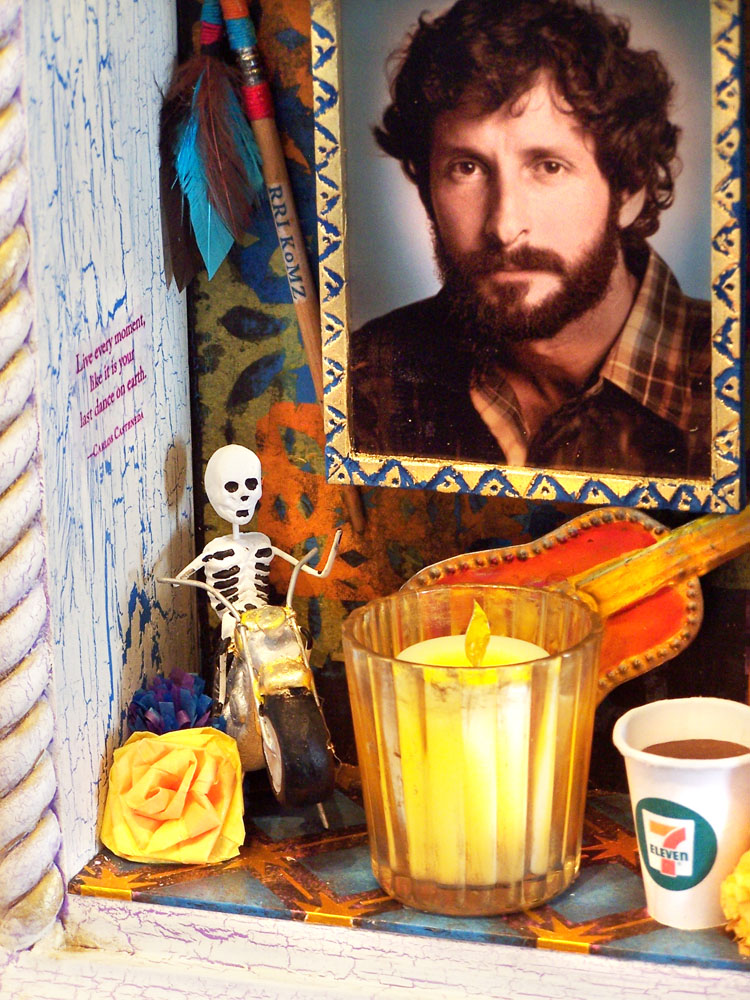 She calls her shrine "They Are Now Resting in Peace with God." It's part of a "Portraits" exhibit that runs through March 1 at the Studio School Gallery in Richmond's West End.

And it's worth the trip.

For more information, go to http://www.vmfa.state.va.us/exhibitions/studio-school/