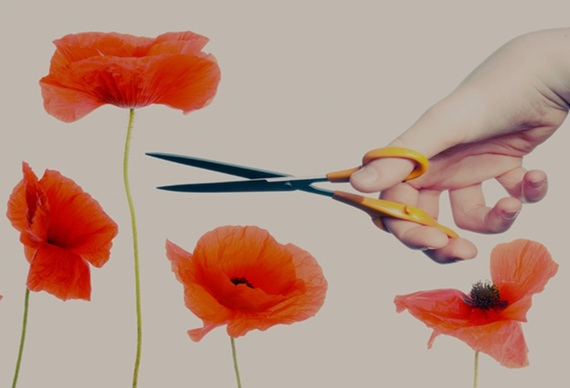 "Tall poppy" is an Australian cultural term that refers to people who stand out for their high abilities, enviable qualities, and /or visible success. But standing out, in this case, isn't viewed positively. In a society that prides itself on egalitarian principals, rising above the pack is considered antisocial and countercultural. Tall poppies generate hostility and elicit a host of undermining behaviors to bring them down a peg. This compelling desire to cut high achievers down to size is called the 'tall poppy syndrome."

Australia may have put a label to this phenomenon, but to some extent, it exists everywhere. In the workplace, the tall poppy syndrome is the desire to pull down a successful stand-out colleague. At a macro-level, it is the gleeful reporting of a prominent business figure's downfall.

Given the relative lack of female chief executives, their gender alone makes them stand-outs and targets of the tall poppy syndrome. And, in some cases, we set them up for it by holding them up as bigger than life, as superwomen who will accomplish the unimaginable.

The fall of Elizabeth Holmes, CEO of Theranos, is one example of tall poppy syndrome at work. Ms. Holmes was lauded as a golden icon of Silicon Valley by garnering a multi-billion valuation for her company, promoting an exciting new technology and promising to deliver on it. With her signature black mock-turtleneck and Stanford dropout status one couldn't help but think of another Silicon Valley sensation who had revolutionized a few industries. But Ms. Holmes is not Steve Jobs. She is not a precocious cheeky young man; she is a confident attractive young woman. In an industry known for it's young male mavericks, she is one of a very few women who have reached a top leadership position in a high-profile company. And unlike some of her male counterparts who have also faced legal sanctions and scandals, she has not been able to escape the annihilation of her reputation. Instead, it is with enthusiasm that she is being chopped down by the media for her failure to deliver on her promised revolutionary technology and possibly for being a perpetrator of fraud.

Marissa Meyer, another stand out as a young, attractive woman in the tech industry, was also elevated to star status when she stepped up for the CEO role at Yahoo. After so many of her predecessors had failed, enormous hopes - that became expectations - raised her up under a spotlight. Ms. Meyer, often referred to as the "embattled CEO," has been cut down because of decisions that didn't pay off, like her billion dollar acquisition of Tumblr, her insistence in staying with search services though it was being outperformed by competitors, and ultimately because she did not "turn around" Yahoo.

All leaders make mistakes, it just comes with the territory; and many do fail. But for women who stand out, who exude drive and independence, who enthusiastically challenge the status quo - all the things we admire in male leaders - their failures present an opportunity to pull out the poppy shears. So how can women who are leaders avoid this?

Successful women leaders know that there is a double standard in how we view and evaluate women and men. They understand that we expect women to be inclusive, collaborative, and interpersonally skilled; while the gender expectations we have of men do not include those sorts of characteristics.

While Elizabeth Holmes is bright, ambitious, driven and has a vision, there is little sense of collaborativeness in the way she has led her company. When she says "we" believe," it is clear that she means Theranos and herself; she isn't referring to a team of people. In the throes of the controversy and sanctions against Holmes and her company, her tech colleagues and her own scientific advisors haven't rallied to her defense or provided much in the way of support.

Ms. Holmes may well be guilty as accused, but the enthusiastic chatter about her pending demise might not have been as voracious if her toolkit of behavioral skills contained inclusiveness and engagement of her colleagues.

She has also been blamed for micromanaging, non-collaborative decision-making and bringing down employee morale. All of these are related to a lack of inclusiveness and engagement, behavioral skills vital to leadership success, particularly for a woman who is leading a company in crisis.

Some female chief executives have managed to avoid the poppy clippers despite the company challenges facing them and the spotlight that illuminates them. Mary Barra, given the formidable task of turning around GM and steering it out of crisis, is known for her inclusive leadership style. With her listening skills and approachability, she gains diverse input before making decisions. Ms. Barra has assembled work teams, broken down siloes, and promoted collaboration across the organization.

Meg Whitman of HP, tasked with reinventing a company in crisis that included a dysfunctional board, instability at the top and a scandal-dogged former CEO, is described as a hard-driving no-nonsense leader, but is also known for repeatedly giving credit to people for their ideas and praising their successful execution of them. She collaborates with her direct reports in project planning and is noted to have a sense of humor, showing her "humanity."

Women who lead do stand out, but the ones who are successful are collaborative, inclusive and make themselves approachable and relate-able. They avoid the sharp clippers that stand at the ready to cut down tall poppies.