Last week, I had the surreal and humbling honor of accepting the Distinguished Alumni Award at my high school alma mater, Niles North in Skokie, IL. Coupled with the milestone birthday year that will soon be upon me - the big 4-0 - it was good cause to reflect on my journey.

It took me a long time to realize that I was smart, that I had power, and to harness the confidence to use these skills. My grades were mediocre at best; as a matter of fact I recall my high school counselor asking me about my dream job, and when I replied,"Obstetrician", he looked down at my grades and said, "Maybe we should find an alternate career."

Indeed, creativity, passion, collaboration and leadership are traits harder to grade, less tangible and even more important in so many ways. What I knew for sure was that I wanted to change the world, to be of service to others and to inspire others to join me.

This was the only path towards overcoming obstacles, finding my purpose and ultimately finding true happiness and joy.

My parents and I immigrated from the Soviet Union to America in 1976 at the height of the Cold War. We were one of 48 families to settle in Chicago that year. I had just turned one; my parents, who spoke no English, were practically still kids themselves. They had $116 between them. It's the classic immigrant story.

A refugee agency set my father up with English classes and helped him find a job as an engineer. Meanwhile, my mother picked up the language of the land by watching soap operas like General Hospital and One Life To Live. They became successful entrepreneurs living the American Dream,starting a company called Lifeway Foods manufacturing kefir, a yogurt-like drink with all kinds of health benefits that is a staple in eastern European countries and now popular in the US as well.

The company became wildly successful, even becoming the first company taken public by a Soviet immigrant. Meanwhile, I worked my way through college thinking I was going to be a psychologist. I interned and worked for a variety of social service agencies serving at-risk populations in areas off the grid in the south side of Chicago.

I never took a business class. Yet as destiny would have it, I found myself working part time at my parents company after starting graduate school and the kefir bug bit me. It dawned on me that you could have tremendous positive social impact for profit and love what you do. I left grad school and spent five years working side by side with my father, being reintroduced to the man who spent the better part of my childhood laying roots in a new country so that my brother and I had more opportunity than he and my mother had.

I only had five years with him at Lifeway Foods; in 2002, when I was just 27 years old, my father had a sudden heart attack and died. Words can't describe how devastated I felt. It shattered my world. I did not know I was capable of feeling such intense pain.

Overnight, I was thrust into the position of CEO. His closest friends said to me, "There is no was a 27-year-old girl can run this company." But because of the skills I learned in high school, college and by watching mom and dad build their business, I was empowered to lead Lifeway as I had led in so many other ways throughout my past. The very next day, amidst my shock and mourning, I was voted in as President, making me the youngest female CEO of a publicly traded company in the United States.

I became fearless. I vowed to protect the company our parents had worked so hard to build. I used our anger and grief to fuel my days and nights as we stabilized and grew the company

And it paid off. Our sales and job creation went up year after year. Twelve years ago, the year my father died, we were a $12 million company with a workforce of 70. Today, our revenues are over $110 million, up more than 800% with a workforce of 350. And I expect to hire another 100 over the next 3 years. We've expanded internationally into Canada, the UK, and beyond and look to building a global iconic brand.

As my profile grew, I was invited to join powerful boards and organizations to leverage my skills and to help create even greater change in the world around me.

I've had the opportunity to travel back to my homeland to Moscow on a delegation, joining and learning from leaders like Kofi Annan and Ted Turner. I've met heads of state including multiple US Presidents and even Mikael Gorbachev. I've had the opportunity to work with the White House and the UN Foundation on issues related to entrepreneurship, youth, girls and women. I've met my rock star idol Eddie Vedder and joined supermodel Christy Turlington on an epic trip to Bangladesh to bring awareness to maternal health. I've buried my father and I've given birth to two beautiful little girls. I've lived a full life in a short number of years.

My most poignant memories come from countries far away from my high school. In the slums of Bangladesh I spent time with14-year-olds with no access to basic necessities like running water or energy. I've spent time in a UN Refugee camp in Uganda with children whose parents escaped from violent war torn countries... like you, they dream of becoming doctors, lawyers, teachers and Presidents. I've spent time with young mothers in Kenya who are desperate to access life-saving vaccines for their babies.

And amidst all this hardship, I have also seen incredible resilience. I met women, and men, girls and boys working hard every day to drive change from the bottom up. I met community health workers who've established birthing centers in urban slums so women can deliver with a trained attendant in a safe, hygienic facility.Teachers who are equipping kids with the skills to make the most of their own lives, and to delay getting married and having children while they are still children themselves. I saw the real difference that people can make, as long as they're willing to try. That the key was to empower youth in the world to drive change in their own community.

The most abundant natural resource in the world is youth. You, the graduating class of 2014. Approximately 40% of the world's population is under the age of 24. Eighty five percent of youth in the world live in developing countries. And you constitute a formidable force. Empowering the world's youths is a gateway for global innovation to solve the greatest challenges of our time.

But don't wait for someone to give you permission. You have power already. So use it. That's where your power lives. Use your privilege and platform to make the world better now. To make the world a place we can all thrive. Use your voice. Use your skills.

You have powerful tools at the tips of your fingertips in this modern age of interconnection, where ideas can cross an ocean in a heartbeat, with game-changing tools such as Facebook, Twitter, Instagram, and SMS we should see our human connection as one that spans the entire globe.

Travel and take time to listen to the stories of your brothers and sisters from around the world. Find the universality that connects us all.

Find your passion. Listen to your gut and follow your heart. Work hard.

Surround yourself with people you trust, people who inspire you and challenge you.

Be an upstander not a bystander in your school and community.

Find ways to articulate what is important for the world to know.

See live music. As much as you can.

Collaborate with others who may be totally very different from you. Diversity is magical.

Run a marathon, climb a mountain or do something else someone tells you "You can't." It's a great metaphor for life and makes for great conversation at the many cocktail parties your future holds in store for you.

Fall in love, have your heart broken and fall in love again.

Take time to mourn the defeats and losses in your life. But take even more time to celebrate the success and victories of your life.

Feed bananas to monkeys in Bali.

Be in awe of every sunrise and sunset you ever see. Try to see as many as you can. And don't feel guilty about filling up your camera roll with pictures of them. It is always magical every single time.

Eat real food. Treat your body well. It's the only one you have.

Early on find constructive ways to invest in your health and reduce your stress like running, yoga, and mediation. Do it at least four days every single week. Forever.

Remember where you came from. Be a leader who pulls others up you climb.

Find your mentor, be a mentor.

Be of service to others.

And when you find yourself standing at the podium of High School or College accepting the Alumni Award of Distinction 20 or 30 years from now... take a moment.

And don't forget to take a selfie. 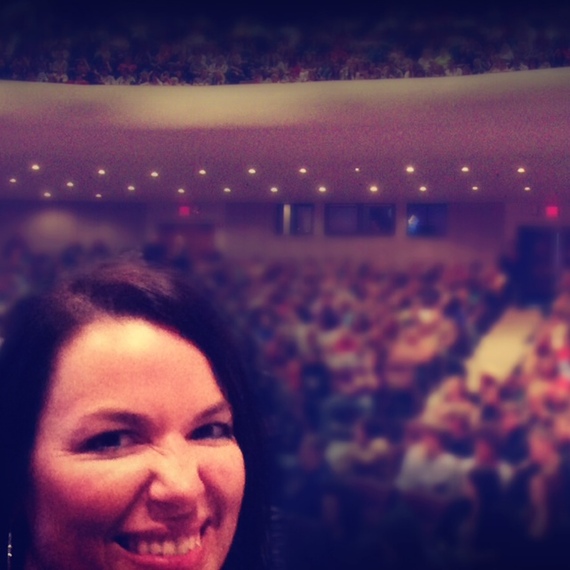