A few years ago, I heard a joke that I didn't find all that funny:

The United States is a long way from being the multi-lingual society that so many of our economic competitors are. Only about 10 percent of native-born Americans -- individuals who went through our education system -- speak a language other than English.

But that's not the only problem. In 2010, U.S. Secretary of Education Arne Duncan said that 95% of American college students studying languages were studying a Western language. That means that less than 5% of our total undergraduate population is being prepared to engage with non-European cultures at home or abroad.

To get a little more specific, the Modern Language Association reports that, in 2010, less than 100 American undergraduates studied Bengali, the 7th most spoken language worldwide. Compare that to the 215,954 who studied French, the 16th most spoken. (For every native speaker of French, there are about 3 native speakers of Bengali. For every American undergrad studying Bengali, there are about 2,226 American students studying French.) The situation is very similar with Javanese, Lahnda, Telugu, Marathi, and Tamil -- the 10th, 12th, 13th, 14th and 15th most spoken worldwide, respectively. 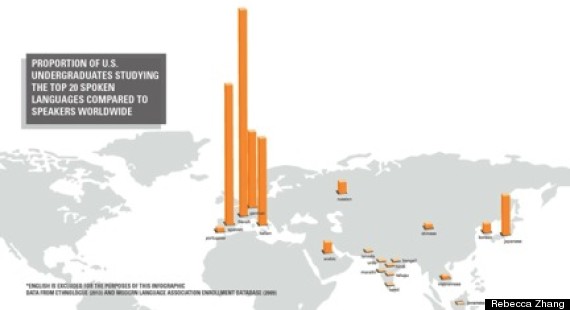 Language learning is extremely disproportionate to native speakers. Why are we consistently learning the same languages, and how can we motivate students to diversify their global engagement? Infographic by Rebecca Zhang.

I have just started my fourth year at an American university that prides itself on creating spaces that promote free inquiry and global learning. And yet, the same languages and cultures continue to be overlooked, except by the occasional development studies major. Many of these languages (Bengali, Javanese, Lahnda, Telugu, Marathi, Tamil) may not be associated with the highest GDPs, but that doesn't mean there isn't incredible economic in learning them.

In The Fortune at the Bottom of the Pyramid, C.K. Prahalad talks about how we can do good while doing well if we enter the "invisible markets" at the bottom of the pyramid (BOP), and develop market solutions for the 4 billion people living on less than $2 per day.

Maybe $2 per day doesn't sound like a number worth pursuing. But do the math: If you work in Bangladesh, a country of 163 million, five or ten percent of the population represents millions of consumers. With knowledge of Bengali, we would be in a position to innovate in unsaturated markets while keeping the principles of trust and open communication at the forefront. And, in these parts of the world, we can build profitable solutions to sustainably address major social problems.

As an individual, these languages open so many doors, not just in business, but also in social justice work, environmental advocacy, international politics, and more. As a nation, we should be concerned about the doors we are closing by not fostering language study. In 2004, the Modern Language Association reported on what they called "the nation's language deficit": Students are not learning languages at a rate that supports our global interests. This remains true even for those languages labeled critical languages by our State Department.

A change in language learning is overdue: It is time to renew our commitment to language study across the board, but especially for these underrepresented languages that too many of our college students haven't even heard of. We need to help the next generation of global leaders understand the value of learning these overlooked languages.

Can we challenge our students to explore these marginalized cultures and underrepresented languages? If we do, the opportunities are borderless.