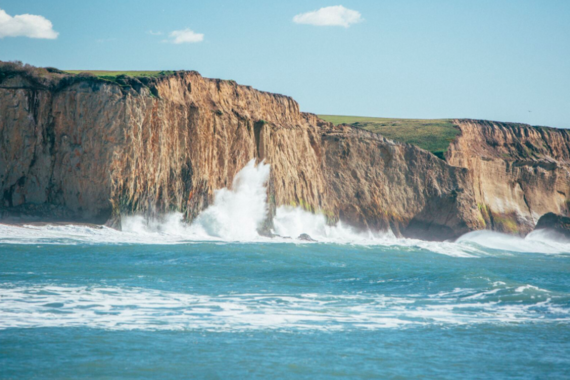 As countries meet this week at COP22, it is imperative that promises made last year at COP21 under the Paris climate accord are seriously pursued, including the Clean Power Plan and the reduction of greenhouse gas emissions. In addition to tackling emissions, the world must also seriously examine, and address, climate change effects that are already impacting our coasts and ocean.

When Superstorm Sandy hit the East Coast in 2012, the U.S. received a sobering glimpse of what future sea level rise could look like. Although it had long been theorized that climate change could intensify storms, it wasn't until a few years after Sandy that studies indicated that climate change had intensified the hurricane and resulting devastation. A Harvard geologist asserts that Hurricane Sandy's 13-foot storm surge is an "example of what will, by mid-century, be the new norm on the Eastern seaboard."

With Sandy spanning such an extensive area and affecting so many people, the economic impacts were equally devastating, causing more than $70 billion in economic damage. For the first time since 1888, the New York Stock Exchange was forced to shut down for two days due to extreme weather.

While research suggests climate change will intensify storms and produce more extreme weather, it's imperative to understand how our ocean and coastlines play a part in climate change. More importantly, it is essential to recognize what can proactively be done to combat climate change impacts.

Our ocean is literally at the 'center stage' of climate change. Nearly every aspect of climate change is related to the ocean and our coasts. Many people aren't aware that our ocean produces more than half of the Earth's oxygen. A recent study calculated that unbridled climate change due to continued greenhouse gas emissions would drastically affect the marine organisms and phytoplankton that generates breathable air. The study concluded that "by 2100, the earth could have atmospheric oxygen levels comparable to the top of Mount Everest today."

The ocean also absorbs more than half of greenhouse gas emitted. As a result, high concentrations of CO2 are causing the oceans to acidify at rapid rates. Evidence from the Pacific Northwest suggests drastic changes in ocean chemistry are detrimental to marine life, such as shellfish, as increasingly acidic water is dissolving the protective shells of sea creatures. If climate change continues at its present rate, the pH level of the ocean will decrease by 150 to 200 percent by 2100.

One of the most significant aspects of climate change is Sea Level Rise (SLR), which occurs when glaciers and polar ice caps melt into the ocean. SLR also occurs when water molecules expand as a direct result of higher ocean temperatures. Since 1901, global seas have risen nearly eight inches. A recent study projected that sea levels could rise between one foot and six feet by 2100, depending on the rate of ice caps and glaciers melting. At the current rate, six feet is likely according to some scientists.

It is obvious that public and private infrastructure will be at risk with rising seas. What is not obvious is that traditional ways to keep the 'sea at bay' can actually exacerbate erosion. Typically, local municipalities fall back on 'coastal armoring' with seawalls, levees and rock revetments to protect infrastructure. Ultimately, these structures are expensive, often ineffective and can actually produce more erosion. Coastal armoring results in the loss of beaches.

There is good news. Organizations, such as the Surfrider Foundation, are working with partners, including agencies, scientists, and elected officials, to plan for future sea level rise and help communities protect their natural shorelines and the economies that depend on them. While the challenges are daunting, the positive news is that there are proven approaches that can be employed locally.

There are many things we can do individually to help curb climate change. Some of the most obvious are to drive less, use mass transit, and bike to destinations. Plant an Ocean Friendly Garden to reduce urban runoff, trap greenhouse gases and build healthy ecosystems that weather storms better. Buy less plastic. Plastic is made from petroleum products and fossil fuels. Help influence policy change by working with groups such as the Surfrider Foundation to advocate for proactive planning and building climate change resilient communities.

Climate change is one of the largest issues facing humanity today. Of the 25 most densely populated counties in the U.S., 23 are located along a coast and are subject to growing impacts from sea level rise. The time is now to begin adapting to climate change and changing how society fuels itself. If we all work together to combat this complex issue, we can impact the tides of climate change and protect our ocean and coastlines for future generations.