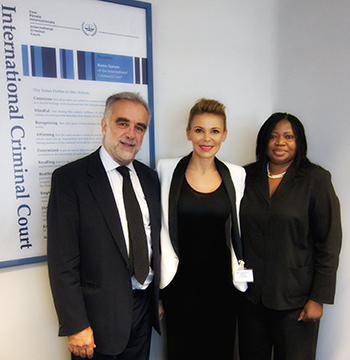 Last week, I was a witness to the changing of the guard at the International Criminal Court Office of the Prosecutor. Luis Moreno-Ocampo is stepping down after the end of his nine year term as the inaugural Prosecutor of the court, and Fatou Bensouda will succeed him in just a few short days. It's a rare moment in the history of international criminal justice, and I was able to meet with both prosecutors at their offices in The Hague as this transition of power takes place.

I've been working with Luis Moreno-Ocampo for several years now -- the Sanela Diana Jenkins Human Rights Project at UCLA School of Law runs the Human Rights & International Criminal Law Online Forum (UCLAForum.com) as a collaborative venture with the Office of the Prosecutor of the ICC. Luis is an intensely smart, quick, and compassionate man. During his tenacious and inspired work as a prosecutor in Argentina during the Trial of the Juntas -- the first trial of this kind since the Nuremberg Trials -- Luis helped restore justice for his country and helped Argentina heal. Luis was the perfect man for the job of the first prosecutor of the International Criminal Court.

Luis was responsible not only for seeking justice for some of the hardest hit victims on earth, but also for setting up the key organ of a complex international organization from scratch. The ICC is a new institution. Unlike the ICTY and other ad hoc tribunals, the ICC is independent of the UN. Formed in 2002, the other organs of the court -- the judges, the defense, and the registry -- had some time to organize themselves. But the prosecution is the engine of the court because it initiates investigations, seeks arrest warrants, and prosecutes defendants. The Prosecutor had to hit the ground running.

The Office of the Prosecutor has opened investigations into situations in seven countries and has publicly indicted 28 people. There have been 19 arrest warrants with five individuals in custody -- one has been recently convicted and four are currently at trial.

During this visit to The Hague, I got to meet Luis' successor, Fatou Bensouda, who takes office on June 16. Attorney-General and Minister of Justice of Gambia, Legal Adviser and Trial Attorney at the International Criminal Tribunal for Rwanda, a delegate at the United Nations and, since 2004, the Deputy Prosecutor at the ICC, Madame Bensouda is a splendid successor. Beyond her impressive credentials from her career outside the ICC, as an ICC insider leading the Prosecutions Division, she&'ll be able to smoothly take the reins of all the ongoing situations being managed by the Office of the Prosecutor.

Madame Bensouda has the expertise, wisdom, and courage to go after the worst of the worst, to doggedly pursue them, and to bring them to justice. It's inspiring to have such a strong woman lead the prosecution. Her calm manner is different in style from Luis', but the power of her convictions and strength of her intellect are palpable. I look forward to working with her and advancing the goals of international criminal justice for many years to come.