In the young adult novel The Lost Marble Notebook of Forgotten Girl & Random Boy (Skyhorse), author Marie Jaskulka has written a book that is wholly original, explosive, fascinating and devastating.

The novel consists entirely of first-person free verse poems written by two teenagers, identified only as Forgotten Girl and Random Boy, who try to find an escape from their dysfunctional families in each other--with violent and heartbreaking results.

The Lost Marble Notebook perfectly explores the intensity of young love, even as it illuminates how Random Boy's controlling and jealous behavior--which seems almost innocuous at first--begins to slowly slide into the physical and emotional abuse of Forgotten Girl.

The result is a never preachy depiction of teen dating abuse that is fully humane, complex, avoids victim-blaming and shows compassion for both the victim of violence, and the young perpetrator raised in an incredibly violent home--while never excusing the violence itself.

I had an email exchange with Marie Jaskulka about The Lost Marble Notebook. 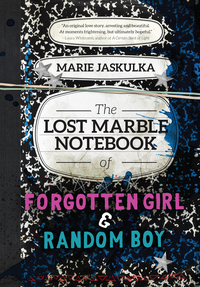 The Lost Marble Notebook is a young adult novel written as a series of poems by two teenagers--Random Boy and Forgotten Girl--about their relationship. How and why did you pick this structure for your novel?

My writing group read some children's poetry I wrote for a freelance job, and they suggested I write a verse novel. I fooled around, creating different voices and points of view to write poetry from. All of my stories are about relationships, so I knew it would be a love story, and I started hearing this girl and boy who spoke to each other in what sounded to me like poetry.

Early on, it was mainly about her, so all of the poems were from the girl's point of view, about her confusing attraction to a random boy she had met, but there was a moment when his perspective became important to the story. Both of their voices had to be involved in order to get the whole picture, and I had created this sort of organic way to do it--a marble notebook that they shared--so I started to write his poems.

Their notebook entries were written as independent poems and then put together. Very few were written in consecutive order. I jumped around a lot. Once I developed the book's concept--a notebook of brutally honest poetry written by two people in an intense relationship--I wrote like a madwoman.

I agree with you that it was essential for us to hear Random Boy's perspective, especially as the relationship became abusive. So many times people ask, "Why do women (or girls) stay in abusive relationships?" But I've always thought a more important question is "Why do men (or boys) abuse women?" But your novel answers both of those questions in an amazing way.

It's interesting that you bring up the old question, "Why do people stay in abusive relationships?" That was one of the main questions I wanted to answer in this book. And in writing, you can't make a character just a bad guy. Every character needs to be the main character of their own story, so I had to ask, "What are the causes that lead this character, who really seems to love this girl, to start abusing her?"

In order to answer the first question, you need to delve into the second question because the person being abused doesn't see just the villain abuser, they also see the kind, weak, abused person underneath all of that.

I researched the reasons and beliefs that cause people to abuse others, and I found it really heartbreaking.

Abusers are generally abused or witnesses of abuse, so it's a learned behavior. But I was also intrigued by the idea that abusers tend to feel as if they need the person they are abusing in order to survive. If that person leaves them, the abuser will lose a big part of who they are, so it's a matter of controlling the person they need, scaring them into not leaving. People often abuse because it's the only method they know for keeping someone they love in their lives. 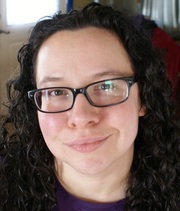 Random Boy's behavior isn't excusable--not in the least--and yet it's easy for the reader to feel empathy for him as someone who has suffered terrible abuse himself and hasn't been able to break free of the cycle of violence. So to go back to what you said about how this book is about two teens in a really intense relationship--can you talk a bit about that aspect of the novel? In the beginning, Random Boy and Forgotten Girl's relationship does have this intensity that can be typical of first love, yet feels so incredibly unique.

I was trying to create the quintessential first love relationship--that feeling of finally finding someone who gets you--when maybe you aren't even sure love is real or if it is real, you aren't sure if it's possible for you.

Both characters are hiding things about their lives. Both carry a heavy weight. When they meet, each takes some of that load for the other just by seeing and acknowledging the pain. The surrounding teen characters all seem rather problem-free and happy, yet the main characters can't seem to feel that bliss. They're too weighed down.

Then they meet and confirm for each other, "Yeah, life sucks sometimes, but here we are, so let's try to have some fun together while it lasts." They don't believe in fairy tale endings, but they're going to try love anyway. Hope in the middle of despair is what they are attracted to in each other, I think.

The honesty between them--not pretending that everything is great when it's really not--is what's unique.

If you or someone you know is being abused by an intimate partner you can call, chat or text LoveIsRespect.org or call the National Domestic Violence Hotline.