In acclaimed author Rufi Thorpe's second novel, Lucas--a hapless father blindsided by his 17-year old daughter Vera's diagnosis of bipolar disorder--decides to travel with her to Vilnius, Lithuania. There he hopes to connect with Vera and help assuage the pain of her diagnosis by introducing her to the hometown of his mysterious grandmother, a Holocaust survivor who both escaped a concentration camp and went on to fight in the Home Army.

Alternating between Lucas's narration and Vera's emails home to her boyfriend Fang, Dear Fang, With Love braids together the stories of the father and daughter with the rich history of a singular city changed forever by war.

I had an email exchange with Rufi Thorpe about the novel.

Before I read Dear Fang, With Love I'd heard very little about Vilnius, Lithuania. The way you write about the city and its history was enchanting. How did you come upon Vilnius as a location for Dear Fang? 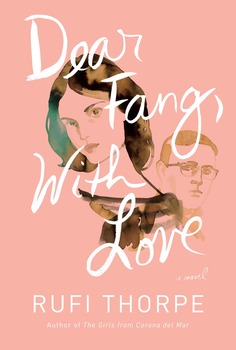 After I finished my MFA, I had not yet published anything and I was in a miserable cycle of waiting tables and feverishly submitting short stories that were inevitably rejected. It was like being in love with someone who didn't love me back. I would relentlessly google increasingly unlikely opportunities late at night until I was numb enough to sleep. And then, one day, I won an honorable mention in a contest run by Summer Literary Seminars, which meant I could attend one of their workshops. I was thrilled. I decided to attend the Lithuania session for no reason other than that it was the one that fit best into my schedule. I knew nothing about Lithuania.

Often times, the most significant things in my life have arrived incognito, wrapped in a cloak of the random and unlikely. Going to Vilnius, Lithuania turned out to be a turning point for me artistically. At the time, I was writing the first draft of what became "The Girls from Corona del Mar." It was also a turning point for me personally. So I suppose it was natural that I would want to write about a city that had such a profound effect on me.

The city itself is magical. The old town is very walkable and filled with baroque churches that look like wedding cakes, the streets are narrow and cobbled, the people are polite and reserved. But it was the history of the city that really bewitched me: the ethnic and religious diversity, the pagan tree-worship, the wars and seemingly endless regime changes, the repression and persecution and violence. So much has happened in Vilnius, and yet the current population does not necessarily have a long memory. Vilnius lost about 90% of its prewar population. So it is literally a different city than it was at the beginning of the twentieth century.

I don't know, that idea fascinates me. There is something about forgotten pasts that gets to me. That is central to what I am always trying to address.

In Dear Fang, Lucas' grandmother Sylvia barely survived life in a concentration camp during WWII. She and her sister were in the gas chamber waiting to die, and an officer pulled Sylvia out, raped her and then set her free. Her sister was not so lucky. And every year Sylvia celebrated her "rape birthday" with a birthday cake. Lucas would always remember "the blue flowers of lard frosting she would lick off the knife." What did this rape birthday mean to you? What did you want to get across in writing about it?

Well, on the one hand, I stole it. The bones of it were a story told to me by a dear friend and mentor who had a family member who had experienced that. So there was a kind of radiant authenticity to me, right away--this eccentricity of the cake, of the combination of freedom and sexual violence.

But I suppose it was also because my mother was sexually abused as a child and one of my very close friends was violently raped. I watched them struggle over years, decades, with it, and what I saw in their journeys seemed so far from how sexual violence and rape were generally talked about. The world saw rape as scandalous, almost licentious, but to me it seemed very threadbare and common.

I saw that the world was very interested in monitoring and editing the narratives of victims of sexual violence, and it was most interested in making them stop talking altogether, either by the ever present suggestion that their testimonies were perfidious, or through shame. Even a woman who was "really" raped was trying to "get attention" if she talked about it. So there was something so elegantly subversive to me about this woman who insists on her rape birthday cake, who makes her family celebrate her survival and the price she paid to obtain it. 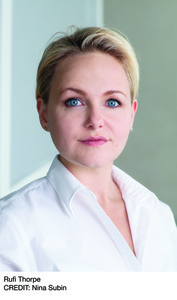 In Dear Fang, seventeen-year old Vera has recently been diagnosed with Bipolar 1, the more severe form of bipolar disorder. Just as she is coming of age as a woman, she's facing this terrible diagnosis of lifelong mental illness. Why did you want to write about a woman on the edge of that particular precipice?

I was always convinced I was going to be diagnosed with a mental illness. It was one of my greatest fears. Women are often told they are irrational and there is a lot of gas lighting that goes on even on a broad cultural level. I was an emotional and sensitive teenager and it was difficult to separate out my femaleness from my emotional instability from my creative ability. Please don't misunderstand me--I'm not comparing a serious mental illness to PMS. But I am saying that an authority figure turning and telling me my thoughts and feelings and perceptions of reality weren't real was a daily fear that didn't seem out of place in the context of my lived experience.

Dear Fang alternates between Vera's emails to her boyfriend Fang and the first-person narration of her father Lucas. How did you settle on these narrative forms?

Originally the entire book was written from Lucas's point of view, but once I started experimenting with Vera's voice, she just sort of exploded. She is one of those characters who writes herself. But I also really like repressed narratives--points of view buried and then discovered, parallax, the way the same story can look very different from various perspectives.

In McSweeney's you have a regular column called "Listicles For People Exactly Like You"--a funny concept in this time where list articles abound in popular media. How did you get the idea for the listicle column and what has the response been?

I was just thinking about listicles and about how we click on them. I have a friend on Facebook who relentlessly posts these kinds of things: "10 Things all Extroverts Who Are Really Introverts Want You To Know." And it became clear to me that she was searching for something in these, searching to see herself adequately described, but wanting too to be the same as some group of people. And I thought: wouldn't it be funny to write listicles that were so radically specific that they applied to no one at all? So I tried writing them and I thought I could make them funny and then I got very lucky that McSweeney's wanted to run them as a column.

But the funny part is that the response has generally been: OMG, this list is ME. People keep tagging each other, saying, "How did this woman know you have a cat named Muffin?" There was even a subReddit of mystified men who all felt a certain listicle may have been written about them. As unique and specific and gloriously bizarre as we all are, the internet teacheth us: there is always another weirdo out there just like you.

Your McSweeney's bio is very much about how you write while simultaneously raising two small children. What is that process like for you?

Well, right now I am answering these questions while my ten-month-old sleeps and my three-year-old watches Animaniacs on Netflix while eating a banana in bed and asking me every ten minutes if I am done yet. Everyone always expresses amazement: "I don't know how you do it!" they say. And my answer is: "I'm not--I'm not doing it. Please, somebody save me, I'm fucking drowning and I haven't taken a shower in five days." And they go, "You're so funny!" And I say, "No, all my wildest dreams have come true and it's AWFUL." And they say, "Oh, YOU."

In all seriousness, sometimes, in some very specific moments it is awful, like, while I was putting my contacts in the other day, my three-year-old was pooping on the toilet and the baby plunged his hand between his legs and pulled a fistful of poop out of the water, and suddenly all three of us were screaming and I remember thinking, "Whatever you do--don't get poop on your contact lens!" As though that was the thing that mattered? So sometimes it is stressful, but at the same time, I am so insanely, ridiculously, and really unfairly lucky. To get to spend this time with my children. To get to write and actually see my work published. I'm living the dream. It's just sometimes kind of a poopy dream.