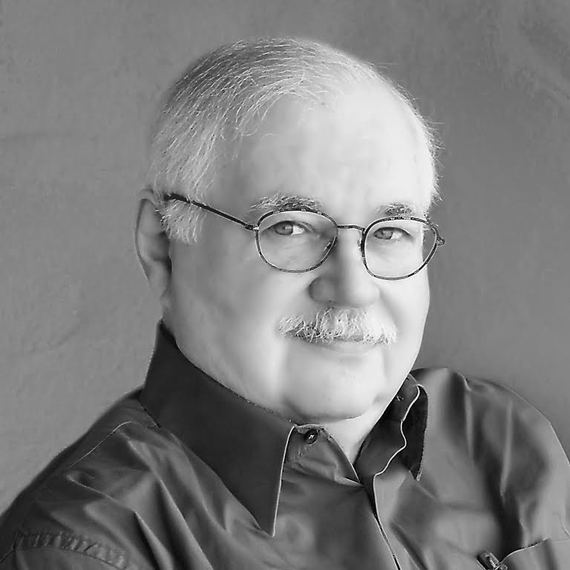 Screenwriter, director, and actor Carl Gottlieb shared an Emmy Award in 1969 for outstanding writing achievement in comedy, variety, or music, for The Smothers Brothers Comedy Hour. For his work writing (with Peter Benchley) the iconic 1975 movie Jaws, he received a Golden Globes Award nomination and British Academy Award nomination. His movie writing credits also include: Which Way is Up? Jaws II, The Jerk, Caveman, Dr. Detroit, and Jaws 3-D. His TV writing work includes episodes of The Odd Couple, The Bob Newhart Show, and various Flip Wilson specials. He has directed Ringo Starr in Caveman, been an original member of the iconic comedy improve troupe The Committee, and written the books The Jaws Log, and (with David Crosby), Long Time Gone: The Autobiography of David Crosby. Carl has served as Vice-President, Treasurer, and member of the Board of Directors of the Writers Guild of America, and is a voting member of the Academy of Motion Picture Arts and Sciences.

What led to your decision to major in drama at Syracuse University?
I was always interested in theater, there was a good Drama Department, it seemed to fit with my dual major (Journalism), in that I was interested in being a theater critic.

What was your plan/career objective for after graduation?
The plan was simple: work ONLY in jobs that involved writing or the theater. No temp work, no bartending, taxi driving, and dog walking-- just "show business." In any capacity.

How did you happened to become a part of the San Francisco improvisational troupe, The Committee?
A close friend joined the company when the theater opened, I visited him in San Francisco while I was still on active duty as a draftee in the U.S. Army. During my visit I helped out on a road gig (in those days I was a stage manager and a lighting/sound tech). I was offered the job of production stage manager when I got out of the army, so I took it.

How long were you with The Committee and what was that experience like?
About six years, first as stage manager, then as director, and finally as a member of the troupe, acting. Happiest, most compelling collaborative creative experience in my life, to this day.

What led to your decision to start writing TV comedy? How challenging did you find it? How long did it take you to get your foot in the door and what were your earliest experiences doing so?
I was performing with The Committee in Los Angeles, appearing nightly on the Sunset Strip; the show was a hit, well-reviewed in all media, and the company in which I worked had a highly talented group of individuals, most of whom found employment in films and television. I was no exception, the Smothers Brothers and their producers saw us, and hired me as a writer. Robert Altman saw me and hired me as an actor. It didn't seem challenging, it was just a case of one job leading to another, so I got my foot in the door early, and never looked back.

You won an Emmy in 1969 for contributing to The Smothers Brothers Comedy Hour. How did you land that job and what do you remember as the highs and lows of that experience?
See above. All highs, no lows. I was writing with as talented a writers room as ever was (Rob Reiner, Steve Martin, Lorenzo Music, John Hartford, Alan Blye, Paul Wayne & others). I was appearing regularly in the show as a sketch player, as well as performing as a member of The Committee, which was a guest act a few times. There is no greater high that writing comedy that gets shot and broadcast weekly to a national audience that is huge, compared to today's hits. (We had 20-30 million viewers weekly). 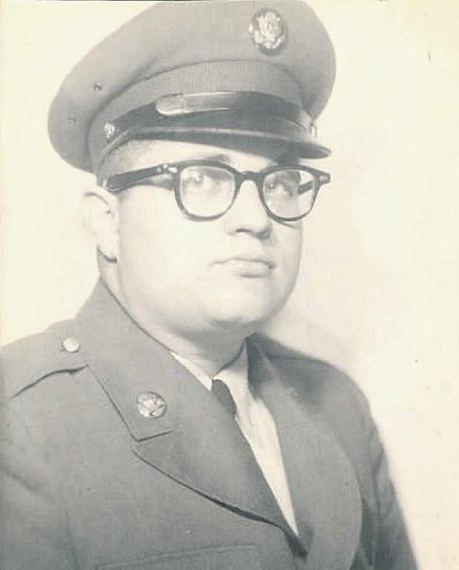 You contributed to other iconic shows such as The Bob Newhart Show, All in the Family, and The Odd Couple. Of all these shows, did you have a favorite? Why? A least favorite? Why?
No favorites. Each job had its own rewards, and it was an unprecedented era for variety and comedy television, of which I got to be a small part.

In the '60s and '70s, was it very competitive for comedy writers? Were you constantly employed or did you have periods of struggle, failure, unemployment, etc.?
It's always competitive, but a little less so when you're working steadily on hit shows. There was a year or two of unemployment, but during that time my wife and I produced more than a hundred TV commercials for the Celanese Corporation, that aired on the Tonight Show, with Johnny Carson, with an improvisational company of comic actors. It was (at the time) the largest time buy in the history of late-night television, so I survived as creative director and head writer and went trekking in Nepal until my next TV job.

Did you learn the comedy writing craft by doing, or did you supplement that with any books, classes, mentors, etc.?
Comedy can't be taught; by the time you know what a sense of humor is, it's too late to acquire one. I learned by doing, and by watching my peers work. Never missed a new comedian, and since I was writing and performing with some regularity, that provided me with all the experience and knowledge I needed. My "mentors" were the head writers and stars for which I worked, and the great acts I witnessed multiple times: Lenny Bruce, Richard Pryor, Lily Tomlin, Robin Williams, George Carlin, and the like.

You wrote David Crosby's two autobiographies, 1989's Long Time Gone and 2006's Since Then. How did you get hooked up with him and what were those experiences like for you?
When I came to San Francisco in 1963, The Byrds were the house band at The Peppermint Tree, a Go-Go lounge up the street from the Committee. We met, and stayed friends forever after. The experiences kept me connected not only to the world of contemporary comedy, but to the world of pop music, rock and roll, and all the exciting musical changes on the West Coast during that era.

How did you become friends with Steven Spielberg, and how did he happen to hire you to write Jaws?
Read my book, THE JAWS LOG. Too long to go into here.

How did you get involved with co-writing the screenplay for The Jerk, and what was that experience like for you?
I had known Steve Martin's work onstage, and we wrote together on the Glen Campbell and
Smothers Brothers TV shows, so when he got his first movie deal, he asked if I'd collaborate with him, since I knew film writing and had done two movies already. It was, of course, a good experience. 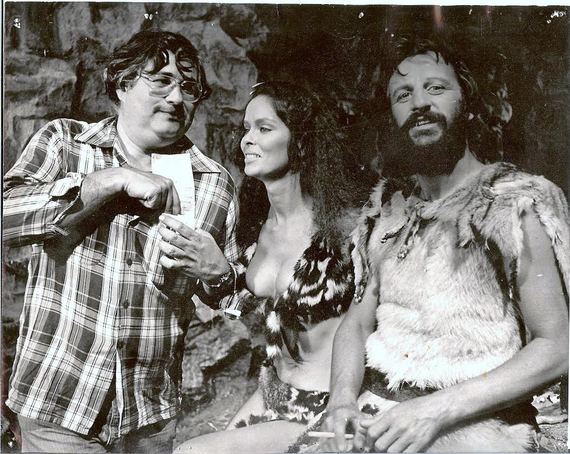 Director Carl Gottlieb on the set of Caveman with Ringo Starr and Barbara Bach in 1981.

You co-wrote and directed the 1981 low-budget cult film Caveman? How did that job come about?
I got the job the old-fashioned way: I was approached by producers Turman and Foster and asked to write a comedy version of "1,000,000 BC," which I did, along with partner Rudy DeLuca. The script got a green light, we went and shot it. Simple, really.

You've served your union, the Writers Guild of America, in many capacities, including member of the Board of Directors, and Vice-President. What did you enjoy about that service, and do you feel it impacted your writing?
I am personally enriched by the opportunity to be of service to the community of writers. The Guild helped me resolve a dispute with a studio early in my career, and I have always been grateful. Working as an unpaid Board member or Officer in the Guild is my way of giving back. It does nothing to enhance my writing, because Guild service takes time away from pursuing a career.

You have acted in minor roles in such films as MASH, Clueless and Jaws. How did you find those experiences and if you were to relive your life, would you go the acting route?
Remember, I came to town as an actor, so I took whatever acting jobs came my way. I never had a "break-out" role, and when I drifted into writing full-time, there was no time left for the dreary routine of being an unemployed actor in Hollywood, so I left that behind me. If I had achieved any real success as an actor, I would have done more of it. Would I choose acting over writing & directing? Only if I became a well-paid and respected star. Which I didn't.

Have you ever had any non-entertainment jobs in the regular working world?
Not really. I was a draftee in the US Army, and a few times after that I broke my own rule and took short-term jobs for which I was totally unqualified, in order to get a few paychecks before the employers caught on to me. Then I'd resign, but after a week or two in a "good job," I had enough money for things like food and rent. But for the most part, I've never strayed outside the boundaries of show business.

Any advice or words of wisdom to aspiring comedy writers?
Keep writing, do anything you can to see your work performed, and then watch clearly and objectively to see what works and what doesn't, and try to figure out why. It helps if you can log a good number of hours as a comic performer, either actor or stand-up.

Any advice or words of wisdom stemming from your own life experience?
It's a cliché: if you do what you love, it's not really work. The fact that you can get paid serious money just for being funny on paper is a cosmic gift, enjoy it, even during the occasional stretches when it involves long hours, stressful circumstances, and unpleasant colleagues in the workplace. Keep a notebook, and write down funny shit whenever you see or hear it.

Your desert island choices for one pick in each of these categories:
Book - The Complete Adventures of Sherlock Holmes
Movie - "Singing in the Rain."
TV series - "Breaking Bad"
Music - The Mozart Quartets
Food - Lobster with corn on the cob, and lemon merengue pie.
Any conversational partner, living or dead, throughout history - Mark Twain
Any romantic partner, living or dead, throughout history - Queen Elizabeth the First