Not everyone wants to raise a family. But for those who do, procreation isn't always the result of "doin' what comes naturally." Gay couples (as well as heterosexuals struggling with infertility issues) are often faced with a difficult decision: Adopt or adapt. Either route is accompanied by risk and expense, which can put prospective parents on a white-knuckle path with regard to their patience, hopes, expectations, and finances.

Theatre Rhinoceros recently staged Tanya Barfield's play about adoption entitled The Call at the Eureka Theatre on an attractive unit set designed by Jon Wai-keung Lowe (who also directed). Barfield's play focuses on a middle-aged heterosexual couple hoping to adopt and their close friends (an African-American lesbian couple with no plans whatsoever to adopt). 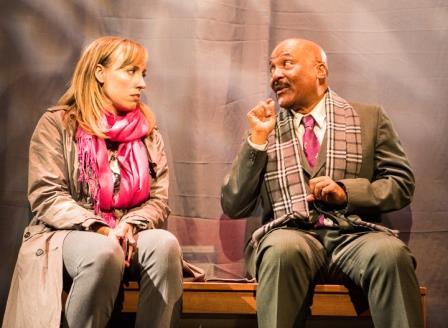 Melissa Keith (Annie) and Darryl V. Jones (Alemu)
in a scene from The Call (Photo by: David Wilson)

Auntie Rebecca (Nkechi Emeruwa) and Auntie Drea (Alexaendrai Bond) have already committed to being in charge of attending to the proper care of the young girl's hair. As Rebecca explains: "The poor child is in danger of having "nappy I-got-white-parents syndrome." Drea's insistence on pointing out that, instead of seeking out an African child, their friends could choose from plenty of black children in America who are waiting to be adopted only serves to further roil Annie's emotions. 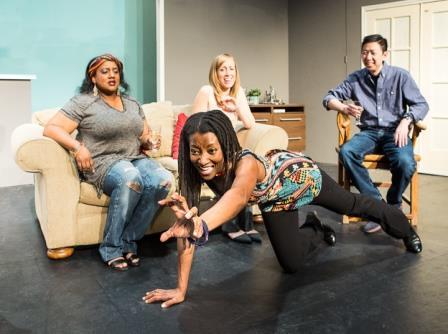 Alexaendrai Bond, Nkechi Emeruwa, Melissa Keith, and
Hawlan Ng in a scene from The Call (Photo by: David Wilson)

Complicating matters is the unresolved mystery of how Rebecca's brother (and Peter's close friend) acquired AIDS while on a trip to Africa. As if Annie and Peter's predicament weren't bringing up enough unresolved issues, their new neighbor, Alemu (Darryl V. Jones), is a lonely African immigrant who came to America as a student and couldn't bring himself to go home. Once he learns that his neighbors are planning a trip to Africa, Alemu keeps bringing them care packages (shoes, syringes, soccer balls) for them to bring with them as gifts.

When Alemu divulges the real reason why he cannot return to his village, the two American couples receive a crash course in First World problems versus Third World problems. As Annie's insecurities reach the boiling point, Alemu gently points out that while she seems hell-bent on wanting to adopt a child from Africa, she's not the slightest bit interested in acquiring the parts of Africa that will accompany such a child. 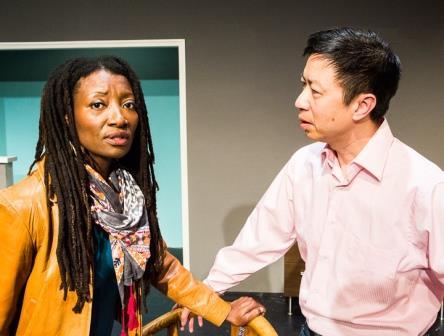 Nkechi Emeruwa (Rebecca) and Hawlan Ng (Peter)
in a scene from The Call (Photo by: David Wilson)

"Adoption is a good thing, right? When we embark on such an enterprise, whose advice should we solicit/listen to? Should we listen to anyone? Is it just our hearts that need our attention? Many issues surround the desire to 'do good,' even as we try to bring fulfillment to our lives. Are they mutually exclusive desires?

Ms. Barfield brings many voices to the discussion: those of African-American lesbians, Africans, Caucasian straights and, like the great Shavian stage debates, the argument is complex. Unlike Shaw, no definitive answer is delivered. Nevertheless, the characters take action, like real people: unsure, nervous, yearning, but aware finally that their action comes with enormous responsibility, like a child."

Barfield's writing is strong and incisive, with Peter (the strong, sensitive type whose emotions run deep) providing an dramatic foil to the three, more volatile women. While Theatre Rhino's ensemble did a solid job with their characterizations, I found the final scene -- in which Annie talks herself into proceeding with the adoption of an older child -- hard to believe. Whether she was doing so due to guilt, desperation, or to mollify her husband, the scene didn't ring true to me.

It's rare to find a family documentary as heartwarming as Matt Yamashita's Sons of Halawa, but that may be because today's Hawaiians are acutely aware of the importance of preserving their culture, from its tribal customs to its close relationship with nature.

Located on the island of Molokai, the lush, isolated Halawa valley is one of Hawaii's oldest inhabited locations. With most of its youth having left the area in search of better jobs, Anakala Pilipo Solatorio (who was adopted at the age of four and chosen to carry Halawa's traditions to future generations at the age of five) is the last person from his generation to still live in Halawa. 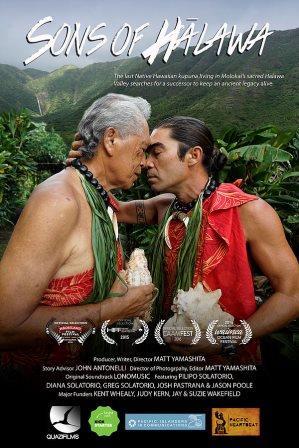 Poster art for Sons of Halawa

A gregarious man in his seventies (who has run a small sightseeing business for many years), Pilipo hopes that at least one of his sons will be able to carry on the traditions of the Halawa valley. While all three men are devoted to "Pops" and have great respect for the cultural work he has done over the years, there is no competition for the position. 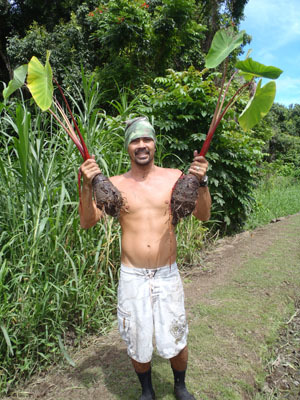 Sons of Halawa does a fine job of communicating the need to preserve one's cultural heritage. Backed by panoramic vistas, the extended Solatorio clan gathers for a yearly reunion during the film as they search for a way to carry on Pilipo's legacy and the culture of the Halawa valley. In addition to being screened at CAAMFest 2016, Sons of Halawa will be broadcast nationally over the PBS network later in 2016 as part of its Pacific Heartbeat series. Here's the trailer: