Every TV producer has pondered the idea of airing "live" executions as a reality series. While a few feature films have explored the possibilities - from Witness to the Execution to The Hunger Games, no one really expects executions to someday be televised. But I came across a documentary on YouTube the other day about a show that was once all the rage in China - a weekly "talk" show called Interview Before Execution. It was a long-time hit, with TV host Ding Yu interviewing the condemned, often just moments before they are put to death. China puts more of its citizens to death in one year than every other country combined - about 10,000 - women, men, anyone 18 or older. There are nearly 60 offenses in China that result in the death penalty. The culture also requires the family of the accused to pay the family of the victim exorbitant amounts of cash to "be forgiven" by victim's family. Only when a victim's family has forgiven the accused can there be a possibility, a small one, but a possibility that the death sentence will be commuted.

Interview Before Execution didn't show the actual execution, which is usually firing squad. But it did present the accused being confronted by both his family and his victim's family as he is being led away to his death, heightening the drama of the series. Many condemned never make it on the show as they are killed in Execution Buses. These conveniences are buses located around the country where criminals are "put down" instantly like dogs using lethal injection. 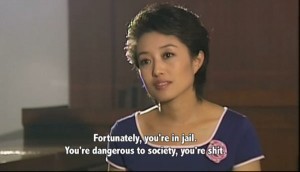 Morbid curiosity is what draws viewers to watch such a show. It's certainly not its host, Ding Yu. I must confess, I find it bizarre that I am critiquing the work of a female host who interviews criminals moments before their deaths. But I suppose as the show was highly rated throughout China, Ding is fair game. Ding is cold and unaffected. Her questions are trite and unoriginal, "How do you feel knowing you're going to die in a few moments?" Granted, most of the condemned she interviews are true killers (if, of course, you trust the Chinese justice system - and there are plenty of reasons why you shouldn't). Ding rarely allows a condemned person to touch her or shake her hand. In one episode, a condemned gay man who murdered his mother asks if he can touch her. She allows his hand to graze her middle finger ever so slightly, as if she's some "goddess of life" touching the lowest form of life, and she tells that man she's very comfortable allowing him to touch her finger. But she later tells the audience she was repulsed by having to touch him, but told him she was comfortable because otherwise he would not have given her an interview. So she's open to tell her audience that she lies to her interviewees, in essence, to get the interview. Can you imagine Barbara Walters admitting that? Would she be as beloved as she is if she admitted to lying to, say Tom Cruise, to get him to open up?

Most who appear on the show have been convicted of killing more than one person, or they've killed a child, or some other dastardly crime. They certainly don't deserve sympathy for what they've done. But it seems to me that as host of an interview show, you must find some middle ground with someone who is just moments away from dying. But then this is China. So I suppose showing any kind of mercy to a condemned soul would only have Ding facing a firing squad herself. Ding says proudly that she's only teared up twice - and each time was, of course, in memory of the victim.

The weekly show was cancelled in 2012 as a result of the negative international attention a BBC documentary brought to the Chinese government. You may be able to find Interview Before Execution - A Chinese Talk Show through a YouTube search. It's a fascinating look at the program, its unwilling participants, and its cold-as-ice host.