When the greed, recklessness, and illegal behavior on Wall Street drove this country into the deepest recession since the 1930s, the largest financial institutions in the United States took every advantage of being American. They just loved their country -- and the willingness of the American people to provide them with the largest bailout in world history. In 2008, Congress approved a $700 billion gift to Wall Street. Another $16 trillion in virtually zero interest loans and other financial assistance came from the Federal Reserve. America. What a great country.

But just two years later, as soon as these giant financial institutions started making record-breaking profits again, they suddenly lost their love for their native country. At a time when the nation was suffering from a huge deficit, largely created by the recession that Wall Street caused, the major financial institutions did everything they could to avoid paying American taxes by establishing shell corporations in the Cayman Islands and other tax havens.

In 2010, Bank of America set up more than 200 subsidiaries in the Cayman Islands (which has a corporate tax rate of 0.0 percent) to avoid paying U.S. taxes. It worked. Not only did Bank of America pay nothing in federal income taxes, but it received a rebate from the IRS worth $1.9 billion that year. They are not alone. In 2010, JP Morgan Chase operated 83 subsidiaries incorporated in offshore tax havens to avoid paying some $4.9 billion in U.S. taxes. That same year Goldman Sachs operated 39 subsidiaries in offshore tax havens to avoid an estimated $3.3 billion in U.S. taxes. Citigroup has paid no federal income taxes for the last four years after receiving a total of $2.5 trillion in financial assistance from the Federal Reserve during the financial crisis.

On and on it goes. Wall Street banks and large companies love America when they need corporate welfare. But when it comes to paying American taxes or American wages, they want nothing to do with this country. That has got to change.

Offshore tax abuse is not just limited to Wall Street. Each and every year corporations and the wealthy are avoiding more than $100 billion in U.S. taxes by sheltering their income offshore.

Pharmaceutical companies like Eli Lilly and Pfizer have fought to make it illegal for the American people to buy cheaper prescription drugs from Canada and Europe. But, during tax season, Eli Lilly and Pfizer shift drug patents and profits to the Netherlands and other offshore tax havens to avoid paying U.S. taxes.

Apple wants all of the advantages of being an American company, but it doesn't want to pay American taxes or American wages. It creates the iPad, the iPhone, the iPod, and iTunes in the United States, but manufactures most of its products in China so it doesn't have to pay American wages. Then it shifts most of its profits to Ireland, Luxembourg, the British Virgin Islands and other tax havens to avoid paying U.S. taxes. Without such maneuvers, Apple's federal tax bill in the United States would have been $2.4 billion higher in 2011.

Offshore tax schemes have become so absurd that one five-story office building in the Cayman Islands is now the "home" to more than 18,000 corporations.

This tax avoidance does not just reduce the revenue that we need to pay for education, healthcare, roads, and environmental protection, it is also costing us millions of American jobs. Today, companies are using these same tax schemes to lower their tax bills by shipping American jobs and factories abroad. These tax breaks have contributed to the loss of more than 5 million U.S. manufacturing jobs and the closure of more than 56,000 factories since 2000. That also has got to change.

At a time when we have a $16.5 trillion national debt; at a time when roughly one-quarter of the largest corporations in America are paying no federal income taxes; and at a time when corporate profits are at an all-time high; it is past time for Wall Street and corporate America to pay their fair share.

That's what the Corporate Tax Dodging Prevention Act (S.250) that I have introduced with Rep. Jan Schakowsky (D-Ill.) is all about.

This legislation will stop profitable Wall Street banks and corporations from sheltering profits in the Cayman Islands and other tax havens to avoid paying U.S. taxes. It will also stop rewarding companies that ship jobs and factories overseas with tax breaks. The Joint Committee on Taxation has estimated in the past that the provisions in this bill will raise more than $590 billion in revenue over the next decade.

As Congress debates deficit reduction, it is clear that we must raise significant new revenue. At 15.8 percent of GDP, federal revenue is at almost the lowest point in 60 years. Our Republican colleagues want to balance the budget on the backs of the elderly, the sick, the children, the veterans and the most vulnerable by making massive cuts. At a time when the middle class already is disappearing, that is not only a grossly immoral position, it is bad economics.

We have a much better idea. Wall Street and the largest corporations in the country must begin to pay their fair share of taxes. They must not be able to continue hiding their profits offshore and shipping American jobs overseas to avoid taxes. 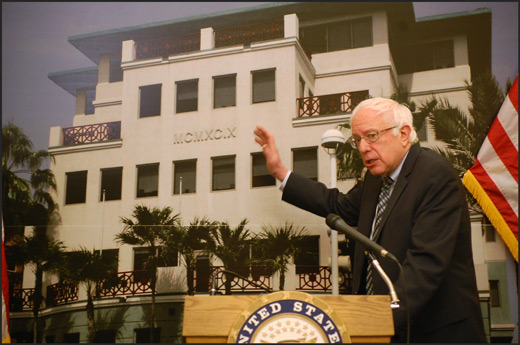 Speaking at a Thursday news conference on a new bill to shut down overseas tax havens, Sen. Bernie Sanders gestures toward a photo of a Cayman Islands building used by more than 18,000 companies to avoid paying taxes.