My Aunt Grace, who died two years ago, was Jewish. Most everyone else in her family -- what was left of it, nieces and nephews mostly -- had remained Christian or had moved on from Christianity to atheism, skepticism or happy indifference.

That left the nieces and nephews of our childless aunt with a question -- what do we say at her graveside? How does a gathering of Christians and skeptics say a parting prayer for a Jew?

As the religion writer in the family, I was appointed to figure it out.

I'd spent some time on the religion beat at a local newspaper, which meant, in the executor's eyes, that I knew a little something about Judaism. Episcopalian though I was, it seemed my years as a religion writer qualified me to be the designated prayer at our Jewish aunt's graveside. 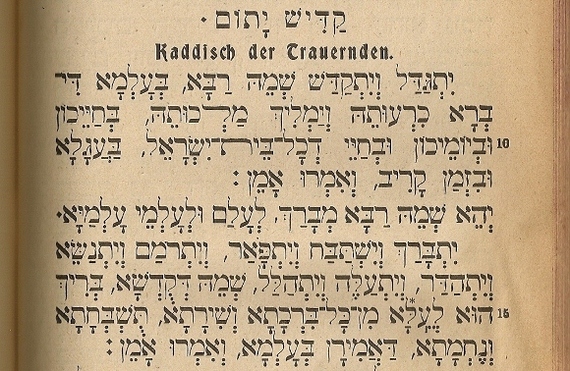 The Mourner's Kaddish, the Bleichrode prayer book, Berlin, 1923. The prayer book was on my aunt's bookshelf when she died. Photo by BF Newhall

My aunt had seen to everything else. She was a businesswoman who took care of business. With characteristic thoroughness, she had planned her interment down to the last detail. Mortuaries were lined up in Arizona, where she lived, and in Michigan, where she was born and had chosen to be buried.

She also had her casket all picked out. Like so much of the furniture she'd collected over the years, it tended toward the elegant -- white with gold trim.

A svelte blue gown embroidered in gold was hanging in one of my aunt's closets when she died. Pinned to the bodice was a handwritten note reminding her caregivers that this was to be her burial gown. The gown had long sleeves and a high neck, the better to cover the inevitable signs of aging, illness and death.

A grave site in Michigan at the little cemetery along Highway 10 between Ludington and Scottville awaited her. She would be buried not far from her mother, father and grandmother.

My Aunt Grace died in January, so when we contacted the mortician in Scottville, he reminded us that it was still winter in Michigan. The ground was frozen. Our aunt couldn't be buried until May, April at the earliest, after the ground had thawed. 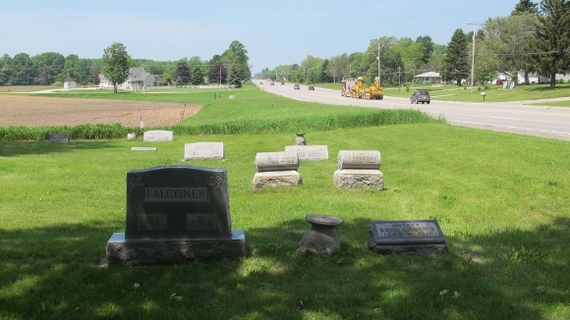 Which gave me time to do some research. I knew that saying Kaddish was an important mourning ritual for Jews. You can say it for your mother or father, brother or sister, son or daughter, husband or wife.

But who could say Kaddish for my aunt?

Can a gentile say Kaddish? Is it blessing enough to say it only once, at the burial? And what if the minyan -- the traditional gathering of at least ten Jewish men required to say Kaddish -- is neither Jewish, nor 100 percent male?

My aunt had neither sons nor daughters to say it for her. Her parents and many siblings had preceded her in death. She was no longer connected to a congregation. She had outlived the rabbi who had overseen her conversion -- as well as the husband who had inspired it in the first place.

If someone was going to say Kaddish for my Aunt Grace, it would have to be me.

I got on my computer. I googled Kaddish. I discovered that the Mourner's Kaddish is not so much a prayer for the dead as a hymn in praise of God.

Interesting, I thought. And fitting. A woman who'd had a full 98 years on the planet had died. A hymn in praise of the source of her life seemed about right.

What didn't go down so well with me was the excruciatingly medieval language of the Kaddish. God as male. God as king. God in (uppercase) His celestial heights. God's great name. God's will. God glorified, exalted, extolled and honored.

Not my kind of God. And not the kind of God that would open the skeptical hearts and minds of certain of the nieces and nephews who'd be gathering around my aunt's grave.

A little sleuthing and I learned that, sure enough, the prayer had its origins during a time of persecution after the destruction of the temple in Jerusalem. Small wonder that the rabbis who first prayed this prayer envisioned an almighty, ruler-of-the-universe God powerful enough to smite one's enemies.

I emailed my friend Andrea, who's Jewish, for help. The next day, two translations of the Kaddish arrived in my in-box. One was a traditional, glorified-exalted-and-extolled translation. The other came from the Jewish Renewal movement.

It was from the latter translation that with great trepidation -- I wasn't a Jew, after all, let alone a rabbi -- I composed a translation (adaptation?) of the Kaddish.

On a rainy day in May, a dozen or so nieces and nephews and a couple of long-lost cousins-once-removed gathered at the Scottville cemetery and said a few last words in memory of our aunt. 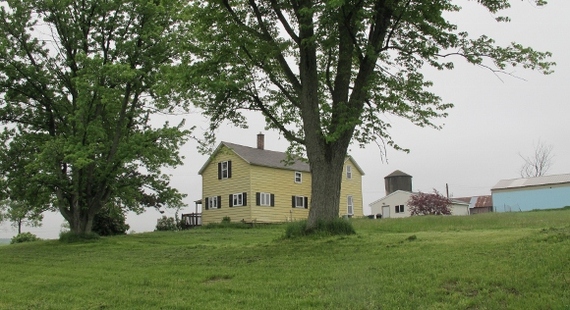 The Scottville, Michigan, farmhouse where my Aunt Grace was born. Photo by Barbara Newhall

Mourner's Prayer for Our Aunt Grace

Praise and thanks be to God throughout the world, which was created according to His intention.

May God's light and love and justice be present in our lives, in the House of Israel, and in all of those who seek the truth. And let us say, Amen.

We praise, we continue to praise. And yet what we praise is beyond the grasp of the words and symbols that beckon us toward it. We know God, and yet we do not know. But still we pray.

We pray that God, who upholds the harmony of the cosmos, will create peace within us and between us, and within all who dwell on this earth. And let us say, Amen.

May the great essence flower in our lives and expand throughout the world. May we learn to let it shine through so we can augment its glory.

We praise, we continue to praise, and yet, whatever it is we praise, is quite beyond the grasp of all these words and symbols that point us toward it. We know, and yet we do not know.

May the great peace pour forth from the heavens for us, for all Israel, for all who struggle toward truth.

May that which makes harmony in the cosmos above, bring peace within us and between us, and to all who dwell on this earth, and let us say, Amen.

Glorified and sanctified be God's great name throughout the world which He has created according to His will. May He establish His kingdom in your lifetime and during your days, and within the life of the entire House of Israel, speedily and soon; and say, Amen.

May His great name be blessed forever and to all eternity. Blessed and praised, glorified and exalted, extolled and honored, adored and lauded be the name of the Holy One, blessed be He, beyond all the blessings and hymns, praises and consolations that are ever spoken in the world; and say, Amen.

May there be abundant peace from heaven, and life, for us and for all Israel; and say, Amen.

He who creates peace in His celestial heights, may He create peace for us and for all Israel; and say, Amen.

If this story resonated with you, you might like "Death Is the Only Guarantee." Also, "The Face of God: Richard Rodriguez Sees It In . . . You."

A version of this post first appeared on BarbaraFalconerNewhall.com. Barbara is a veteran newspaper journalist whose stint as a religion beat reporter in the San Francisco Bay Area inspired her newly released interfaith book "Wrestling with God: Stories of Doubt and Faith."