I grew up in the middle of Michigan, going to a church my friends called "the parking-lot church." It was not an unfair name; the church was set back about fifty yards or so from the road, and the entire expanse of land between the church and the curbstone had been paved over. In a town that was devoted to building cars, this perhaps wasn't so surprising. 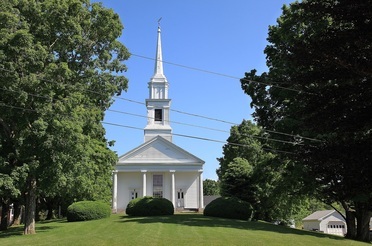 It wasn't until I moved to New England that I first saw with my own eyes an iconic American scene: the church poised on the town common. It's not just a lovely image of a past world; it may just be a picture worth a thousand words about where the church might be headed.

The town common was (and in many places still is) a piece of land held in common by the residents of the town; it was a shared resource, maintained by all for the use of all.

That simple idea has become a powerful way of thinking about the future. Significant changes in the capacity of people to communicate and share information with each other, enabled by the coming of digital technologies and the connective tissue of the internet, have given rise to new thinking about the power of the commons to achieve significant social goals.

In its early pages, Yochai Benkler's important book The Wealth of Networks offers the pithy observation that "[t]he rise of greater scope for individual and cooperative nonmarket production of information and culture...threatens incumbents of the industrial information economy." At first blush, that statement might not seem to have a lot to do with the church. But look deeper, and you'll see that it does.

Most of us who are part of a faith community think of what we do there as something primarily spiritual. And that is true; but it is not exclusively true. Faith communities are also religious organizations, and those organizations emerged over a period of many decades, and developed (not accidentally) in parallel with the rise of America's industrial economy.

One important result of this is that churches look a great deal more like firms than they do like the town common. They have well-defined hierarchies that serve the purpose of distributing authority and regulating the credentialing of professionals who hold that authority (otherwise known as clergy). Even within churches that pride themselves on local autonomy, there is a national level of administration that attends to things like clergy pensions, standards for accrediting seminaries, and generally maintaining the professional model that stands at the center of the institutional structure: the ordained professional. These exist for Congregational, Lutheran, Presbyterian, Methodist, Episcopal and Unitarian churches, to say nothing of the variety of Baptist identities.

Seen in this way, churches are organizations formed to serve a set of social purposes, both for those who are part of the organizations and for those who were not. We are "incumbents of the industrial information economy," in Benkler's phrase -- even if the information we're trying to produce and distribute is the message of the gospel. And of course there are other examples of organizations like this; the Red Cross, say, or the Kiwanis Club, or even colleges and universities, credit unions, hospitals or libraries.

For a long time, the idea of putting together these organizations like firms was something so obvious that it seemed silly to question. Hierarchical organizations generally make for a more efficient use of resources. They protect and maintain an organization's identity. They serve an important gatekeeping function for permitting access to the privileges given leaders. And so on.

But in many cases, what once seemed obvious as a way of organizing these groups is increasingly questioned. It may be that the church -- among many other basic organizations in society -- is living through a wrenching, yet for the moment almost invisible, transition. We are leaving the period of our captivity to the firm, and we are entering onto a period in which the church will be organized more and more like a commons.

David Bollier, one of the most articulate thinkers in the commons movement, has written in his most recent book that "most states remain yoked to the twentieth-century mindset of centralized bureaucratic control, and so would have trouble recognizing the value of self-organized commons based on minimalist design principles." The same could just as well be said of churches. Moving the church from the firm to the commons will take thinking, praying, and working at all levels in our faith communities. It will feel disorienting, maybe even frightening. But it may just be that assuring the vibrancy and vitality of our churches in a changing world depends on making the shift.