I admit I live in my own little world. That's what happens when you write all the time -- during the day, the technical stuff, and at night, the fiction and the blogs. I hate to admit that within this world, I have virtually no social life. While I hope that changes someday, and I meet a nice man and go out more, every so often, reality rears its ugly head and intrudes on my world. Then I reluctantly feel I have to speak out.

When I attended Ohio Wesleyan University, I learned about critical thinking, read great literature, studied history, and examined and discussed viewpoints that differed from my own. The discourse was civilized and uplifting and above all enlightening. I am a progressive type. Sure, I like progress. I yearn to see America moving forward, to provide safety nets for the poorest of us, stop the rapaciousness of big business and instill within them a conscience (after all, according to the Supreme Court, they're people just like us.

I want a fair deal or, dare I say it, a "New Deal" for everyone.

Being progressive however does not mean that I cannot respect and understand true conservative values. I can even agree with some of them. More importantly, I usually respect the person, even when I disagree with their ideas. For the record, my mother was a Republican - as she said, a member of the party of Lincoln - and I respected her values.

I really wish that the constant scrutiny by the 24/7 media, the vilification of anyone running for office, and the chance of an error or a change of opinion being brought before the public eye and turned into a crucifixion, didn't discourage intelligent, high-minded persons with integrity from seeking public service. Instead, we are stuck with the thick-skinned, the bent, and the buffoons seeking to fill the House, the Senate, and even the Presidency.

When I was four years old, my family went to the Ohio State Fair in Columbus (I think it was the Ohio State Fair, but since I was only four, I can't swear that it was.) Anyway, I was riding on a carousel, when a boy pushed me off and into the gravel below. I was pretty badly hurt and my mother, always a quivering tower of Jell-O in these circumstances, fainted at the sight of my torn and bleeding knee. Luckily, my uncle got me to the nearby nurse's station. 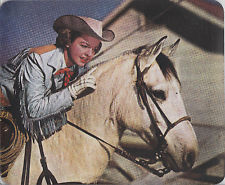 I was alone there, scared and crying, when a nice lady from the next bed came over and sat with me. It was none other than Dale Evans, rider of Buttermilk, Trigger's best friend and wife to Trigger's rider, Roy Rogers. She comforted me and held my hand as the nurse picked out the gravel embedded in my right knee and dressed the wound. (To this day I still have a scar.) She talked and sang to me, and made a fuss over me, even though she wasn't feeling well and wanted to rest in the nurse's trailer before the evening show.

When my uncle finally came for me, she gave him special guest box seat tickets for the show, right in front. I was so excited when she and Roy Rogers rode Buttermilk and Trigger over to where I was sitting, and I got to stroke their manes. Even in the middle of the show, she told my now-recovered mother and the rest of the family how brave I was. I may have been limping but inside I was floating on air for the rest of the weekend.

Years later, I found out that we had vastly different viewpoints on politics and other issues. That didn't matter. All I remembered was the nice lady who held my hand and sang to me. It was perhaps one of the most valuable lessons I've ever learned. Separate the person from the politics and always appreciate the good in the person. Essentially, "do unto others, as you would have them do unto you."

What I want is a political system where civil discourse and a mutual desire to improve and enhance the lives of all Americans are the ultimate goal. Not some throwback to the 1950's or the antebellum South that excluded so many of us from achieving the American Dream. The South lost the Civil War, right?

We must stop equating the cult of personality with political acumen. Reality-TV does not qualify someone to be president. We must realize that even if someone is a celebrity, it's not an automatic ticket to a political office, especially the highest in the land. I think what bothers me most is the name calling - by everyone - and the singular lack of workable, reasonable ideas to discuss over a wide range of important issues.

I have friends who thought that I was too harsh the last time I wrote about Donald Trump. I don't think so. I stated then, and I reiterate, the man has no φιλότιμο, loosely "love of honor." He seems to deliberately misinterpret the Golden Rule, and turns it on its head to proclaim "do it to others, before they do it to you".

His wife Melania Trump once said, "he's no Hitler" but as Adam Gopnik stated in the New Yorker magazine "...Hitler wasn't Hitler--until he was." Unlike Hitler, Donald Trump has no written agenda spelled out in the pages of a Mein Kampf.

Instead, he relies on Twitter and the ever-so-compliant media to get out his branded messages of hate, misogyny, racism, and discord. Even if he doesn't "actually" buy into these sentiments, he caters to those that do. The adulation of the masses that exalt their hatreds and translates them into political agendas provides his vision of America.

It's not an America we can afford.

Don't like immigrants? Deport them, and build a wall.

Don't like women being equal ? Humiliate and punish them.

Don't like America, the land of the free, the home of the brave? Destroy it from within.

Whenever I hear him say a "businessman" should be president, I can't help thinking of those other businessmen like Warren Harding or Herbert Hoover who led us into the Great Depression. Or our latest example of a businessman as president, George W. Bush whose lies and deceit still have us embroiled in never-ending wars and produced the Islamic State.

I don't think any of those people were bad men. I'd probably enjoy a chat with them, maybe even a cookout, but it doesn't mean that they were good presidents or had the best interests of the American people in mind.

I don't know Donald Trump. He's probably a good father and a nice grandfather with a bad comb-over and little hands. However, I really hated his TV shows. I thought he was arrogant, childish, and mean-spirited, and his attitude left me not liking his brand. What bothers me is that he is carrying this brand into the political arena and that same mean-spiritedness is translating itself to his followers.

Only they don't think it's reality TV, it's simply reality that feeds into their own fears, prejudices, and senses of non-existent persecution. He caters to the lowest common denominator and instead of offering solid solutions, he only feeds fears, just like the demagogues of the past did.

His "brand" of republicanism is vastly different from the conservative values espoused by Dale Evans, my mother, or any of the fine upstanding conservatives whom I respected and admired even when we differed.

We need them back. We need politics to reach for the pinnacle of American society and elevate us into the country we strive to have as the envy of the world. Not some half-baked version of the worst among us.

Or one day, we're going to turn around and realize we aren't the United States of America anymore.