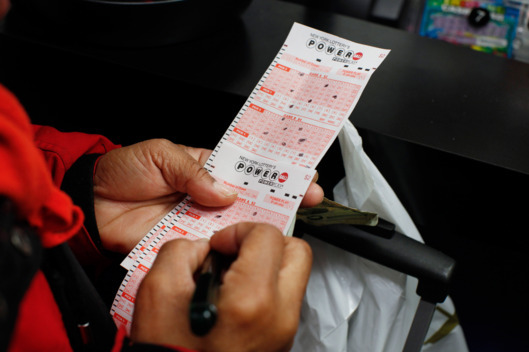 A woman buys a Powerball lottery ticket at a newsstand in New York City on January 12, 2016. (Photo: Kena Betancur/AFP/Getty Images)

Three lucky souls won the $1.5 billion Powerball jackpot last night, and chances are, you weren't one of them. But let's say some other massive upswing in good fortune comes your way this year. What happens to a person's emotional life after winning the lottery, literally or metaphorically?

Related: How to Buy Happiness

In 1978, a trio of researchers at Northwestern University and the University of Massachusetts attempted to answer this by asking two very disparate groups about the happiness in their lives: recent winners of the Illinois State Lottery -- whose prizes ranged from $50,000 to $1 million -- and recent victims of catastrophic accidents, who were now paraplegic or quadriplegic. In interviews with the experimenters, the two groups were asked, among other things, to rate the amount of pleasure they got from everyday activities: small but enjoyable things like chatting with a friend, watching TV, eating breakfast, laughing at a joke, or receiving a compliment. When the researchers analyzed their results, they found that the recent accident victims reported gaining more happiness from these everyday pleasures than the lottery winners.

This is how the study is usually written about, in a "gee whiz, ain't that counterintuitive?" kind of tone. But what's really striking when you look at the results reported by the researchers is how close their answers actually are: On average, the winners' ratings of everyday happiness were 3.33 out of 5, and the accident victims' averaged answers were 3.48. The lottery winners did report more present happiness than the accident victims (an average of 4 out of 5, as compared to the victims' 2.96), but as the authors note, "the paraplegic rating of present happiness is still above the midpoint of the scale and ... the accident victims did not appear nearly as unhappy as might have been expected."

This is partially because of what's become known as the hedonic treadmill, or hedonic adaptation, that annoying tendency humans have to get used to the things that once made them happy. I particularly love how the authors of this 1970s paper phrased it:

Eventually, the thrill of winning the lottery will itself wear off. If all things are judged by the extent to which they depart from a baseline of past experience, gradually even the most positive events will cease to have impact as they themselves are absorbed into the new baseline against which further events are judged. Thus, as lottery winners become accustomed to the additional pleasures made possible by their new wealth, these pleasures should be experienced as less intense and should no longer contribute very much to their general level of happiness. Related: Money Makes You Less Sad, But Not More Happy

So this means that anything shiny and new in life -- like a job, or a sweater, or a spouse -- is exhilarating, until it becomes the thing we get sick of seeing every damn day. Likewise, some psychologists have theorized that people have a happiness set point, a baseline level of well-being preprogrammed by our genetics and further shaped by our environment. This theory suggests that the emotional aftermath of wildly fantastic strokes of luck or devastatingly catastrophic calamities will essentially leave you just as happy as you ever were. (Though some recent research has poked a few holes in this line of thinking.)

But maybe the most important thing this research has to suggest is just how awful people are at predicting what will make them happy, something psychologists call affective forecasting. This is perhaps particularly true when it comes to money: A shorter commute would make you as happy as a 40 percent raise, getting a paid vacation from your boss would make you happier than receiving cash, and having more free time will make you happier than having more money, and yet people often guess that more money is the answer.

Some of these errors in forecasting may, in part, be the fault of the fact that this is a relatively new mental trick, one that our brains just haven't had time to perfect yet. "Modern people take the ability to imagine the future for granted, but it turns out that this is one of our species' most recently acquired abilities--no more than three million years old," Dan Gilbert, the Harvard psychologist and author of Stumbling on Happiness, has said. "The part of our brain that enables us to think about the future is one of nature's newest inventions, so it isn't surprising that when we try to use this new ability to imagine our futures, we make some rookie errors."

Interesting theories, though I can think of, oh, about a billion reasons why they might be wrong. More from Science of Us:

What Happens When Rich People Marry Poor People Your Happiness Makes Your Friends Happy, Too What It's Like to Be a Stoner Who's Allergic to Marijuana The Story Behind David Bowie's Unusual Eyes Why a Little Pessimism Is Good for You

Voting Made Easy
Register to vote and apply for an absentee ballot today
Register now
More:
lotteryHappinesslottery winnersscience of uspowerball
Newsletter Sign Up
The essential guide to taking care of your mind and body
Subscribe to HuffPost’s wellness email
Successfully Subscribed!
Wellness delivered to your inbox