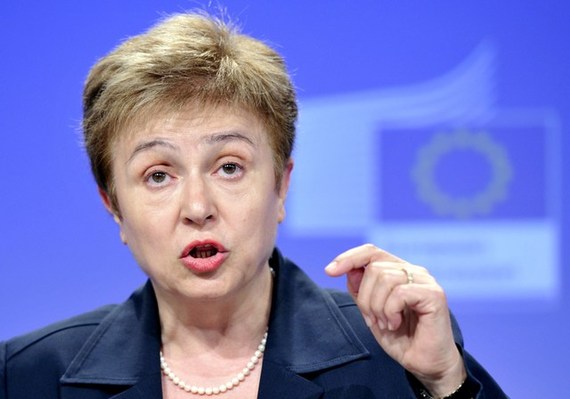 A last-minute push by Angela Merkel and shady elements in Eastern Europe seeks to discredit Irina Bokova, UNESCO's admired Director-General, and insert a darling of the European far-right in her stead.

While Americans and many in the world have been focused on the dramatic U.S. Presidential contest between Hillary Clinton and Donald Trump, another important election is imminent -- for the next UN Secretary-General.

The fifteen members of the UN Security Council have been conducting several rounds of straw polls and numerous consultations since August on the choice of the successor to Ban Ki-moon. Nine men have held the post of the world's top diplomat since the organization was founded in 1945. The election process has always been opaque and behind closed doors, with the five permanent members of the Security Council - US, Russia, China, France and Britain - having the biggest say.

Hopes that this year's process would be more open and democratic were dashed last month when a rare public spat between the spokespersons of the Russian and German foreign ministries revealed to the public that Chancellor Angela Merkel had been lobbying doggedly behind the scenes for the late entry into the race of EU Commissioner Kristalina Georgieva, a Bulgarian national.

In the Bulgarian capital Sofia, Dimitar Delchev, an ally of Bulgarian Prime Minister Boyko Borissov, explained in blunt terms the rationale behind the German push: "We believe that the head of the UN should be a right-wing person with right-wing thinking like the people who head the Council of Europe and the European Commission."

The Russians were not the only permanent Security Council member who have criticized the Germans' unexpected, and uninvited, push for a place at the top table. Paris and London were reported to be quietly fuming over Merkel's move. British diplomats in New York, speaking off the record in keeping with the P5 tradition of not publicly expressing views on the candidates, quietly assured journalists that London was leaning towards Antonio Guterres, Portugal's former president with a ten-year stint as UN High Commissioner for Refugees.

The German Chancellor's foray into the P5 posed a double problem for France's Francois Hollande. The imperative to maintain Europe's fragile unity, under stress by the aftershocks of the Brexit referendum, has kept the French mum on the subject -- but Hollande is said to be angry that he had not been consulted before Merkel made her gambit. Moreover, she and her allies in Brussels have dragged European party politics into the arena of UN Secretary General election by placing their "European right-wing" candidate - Georgiva - as a barrier to the election of the "Socialist" Gutteres, who had established himself as the clear frontrunner in four rounds of voting before the Bulgarian commissioner was introduced.

The concerns over Georgieva's nomination, and how it was achieved, were not limited to the P5. Many member-states were surprised to see Hungary's far-right leader, Prime Minister Viktor Orban, emerge as the most vocal supporter of Kristalina Georgieva's UN bid. On a visit last month to a fortified border fence in Bulgaria designed to keep out migrants from Turkey, Orban heaped praise on Georgieva and expressed Hungary's "unsparing" support for her candidacy. Speaking to journalists with the Bulgarian leader standing next to him, Orban went on to call on the EU to "sink" migrant boats in the Mediterranean and "give preference to Christians over Muslims when it comes to refugees."

Georgieva has not answered questions from reporters who have asked her if she endorses the positions of her major political backer on migrants and refugees. Her ambivalence could be a major worry for human rights activists about the outsize influence that far-right European leaders such as Orban would have on a United Nations under Georgieva's leadership

Orban's staunch support for Georgieva has also aroused concerns among Arab and Muslim countries that have serious concerns about the rise of Islamophobia and racism in Europe, fueled in part by the anti-Muslim rhetoric of Orban and his ideological bedfellows.

Georgieva's "fast-track" entry into the race also raised questions from senior officials in several countries about the way it wreaked havoc with the process. Portuguese President Marcelo Rebelo de Sousa compared her to "an athlete who joins the marathon in the last 100 meters." Others, such as Slovenian Foreign Minister Karl Erjavec, have criticized some of the leaders of the European Commission for pushing Georgieva's candidacy while there are five candidates from the European Union member states. "The EU has neither the authority nor has it taken any joint positions on each individual candidate," Erjavec tweeted.

While heated discussions over this eleventh-hour candidacy continue in New York and around the world, the situation in Sofia - ignored by the world media - is no less interesting. The Bulgarian political parties, the press, and civil society forces are divided about Prime Minister Borissov's surprise decision to withdraw support from Bulgaria's original candidate, UNESCO Director General Irina Bokova, and throw his support behind Georgieva. Pundits have been asking, what made Borissov change his mind after nominating Bokova back in March, and rejecting the entreaties of his friend and ally Kristalina Georgieva?

Back in March, Bokova was widely seen, in New York and elsewhere, as the candidate who ticked all the right boxes: a twice-elected director general of a major UN agency with a solid resume as a former acting foreign minister, ambassador and parliamentarian: she was both a woman and Eastern European, two conditions that were widely accepted, as the UN has never had a woman Secretary General and Eastern Europe remains the only geographic region in the UN system not to have held the post.

Then, seemingly out of the blue, a sustained stream of negative articles against Bokova began to appear in several Bulgarian newspapers, accusing her of being close to Putin; of having a pro-Arab bias because Palestine was admitted to the UN on her watch; and of mismanaging UNESCO. There were ad hominem attacks on her and her family members. All the newspapers that placed these stories are owned by Ivo Prokoviev, an oligarch with close ties to Commissioner Georgieva. Soon, charges against Bokova in Prokoviev's newspapers were finding their way to the tabloids in London. The effort had all the looks of a coordinated public relations campaign.

The current saga has created the perception that the selection of the next UN leader will be the outcome of backroom deals, intervention in the decisions of smaller nations, and unscrupulous propaganda campaigns. As one UN ambassador lamented, "The current election is showcasing all that's not right in the UN system."

It will eventually be up to the five permanent members to decide who among the candidates is best suited to serve the job. But this once-in-a-decade opportunity to render the selection of a UN Secretary General transparent and inclusive appears to have been a casualty of this sordid affair.

This article first appeared on October 5 in Majalla magazine. To read it in Majalla, click here. New York-based Joseph Braude has covered the UN for a variety of newspapers and magazines.