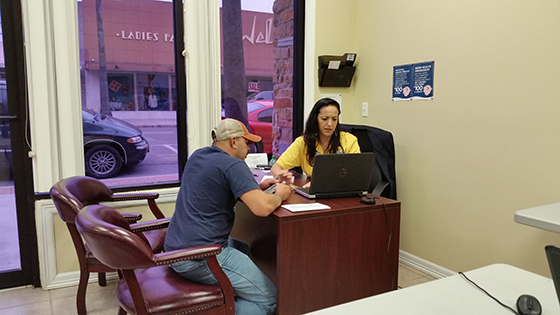 The thing to understand about Affordable Care Act (ACA) navigators is that they are busy people doing an important job: shepherding consumers through the enrollment process and helping them complete and file the application for financial assistance for lower insurance premiums. Navigators receive training from the Centers for Medicare and Medicaid Services and are then officially certified to provide impartial, in-person assistance. They offer a personal touch to a process that many find daunting, especially those who may have never had insurance before.

To get a sense of what these people do every day, we caught up with Cliff Clark, Program Director for NCLR Affiliate MHP Salud, which offers navigator assistance to the Rio Grande Valley. MHP Salud is a community-based organization that specializes in community health worker programs. It is currently in its second year of offering navigator services.

Together with his team, Clark serves a four-county area of more than one million people. Since open enrollment began in November, Clark has been busy traveling the massive region doing all he can to enroll as many as possible. He took me through an average day for a navigator in his area. "They might report to our offices in Weslaco, but they might also report to an off-site community partner that has made space available to enroll folks," said Clark.

When a consumer arrives, the first thing the navigator does is begin an assessment that involves questions about family size, who in the family needs insurance, and what the consumer is looking to achieve. Based on this information, they begin creating an online profile for the enrollee and start the process of applying for financial assistance. This assistance comes in the form of a monthly tax credit, so navigators first collect information on income estimates to see if the enrollee qualifies. If the enrollee does, they can begin the process of selecting the right plan for their circumstances.

It is a lengthy process that depends on the customer's understanding of insurance and often requires several visits. Helping people take the time to make the right decisions, however, is a top priority for Clark, and it's something he stresses to his staff. "It's not something you should rush," he said. "You're not going to buy a car with no wheels on it, because it's no use to you. It's the same with insurance."

One thing that sets MHP Salud apart is its use of community health workers, or promotores de salud, as navigators. In the Rio Grande Valley, providing culturally competent services is paramount, and promotores make folks much more comfortable. Clark notes that among those he serves, 85 percent of whom prefer to speak Spanish, the face-to-face contact is far more preferable to telephone assistance or online service, since technology can be a barrier to many of his customers.

"They're more approachable; they're a trusted part of our community," said Clark of the promotores. "They live in the community, they know the challenges, and they understand the culture. That's an extra layer of comfort that consumers have with our promotores."

Also a boon this year is the outreach MHP Salud and many other groups have done to inform the public about what they need to enroll. As a result, Clark has found that many more clients now arrive with the documents needed to begin enrolling. It was a far cry from the first year, in which they often had to tell folks to return with the proper documentation.

"Before, they didn't have anything with them, because they just didn't know. They were confused, perhaps a little frustrated, because they felt obligated to do it," said Clark. "People are coming in much more prepared this year."

Of course, having all the documents needed to begin the process isn't always a guarantee that people will receive coverage. This is especially true in Texas, which has failed to extend Medicaid coverage to low-income families, putting them in the "Medicaid coverage gap" because they make too much to qualify for Medicaid and too little to qualify for a subsidy. For Clark, it's one of the more challenging aspects of the job.

He notes that only about 20 percent of the applicants MHP Salud assists actually qualify for a subsidy because their income level is between the eligibility limits. In such cases, consumers in the coverage gap receive an exemption to the law so they won't be fined for not having insurance. But it also means they won't have access to affordable insurance. 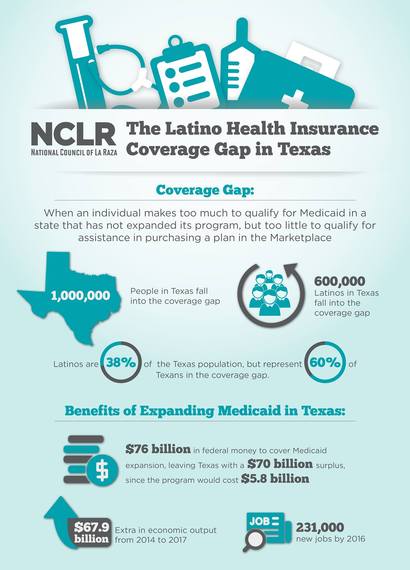 "Trying to explain the Texas Medicaid coverage gap to those who are terminally ill and why they can't have access to health care has been very difficult," said Clark. "It's quite a bad situation."

For the millions who fall into the coverage gap, many of them will do what they were doing before. "They'll go to Mexico to see a doctor or go to a cash clinic, which is only $40," said Clark. "Some will go to federally qualified health centers, which offer services to families with no insurance."

He says he's hopeful Medicaid will be expanded in Texas, or that at least an alternative solution will be offered, as it's sorely needed in the area he serves.

Of course, one of the more rewarding parts of Clark's job is the flip side of that "bad situation." He recalled one story of an elderly couple who received a 90-percent subsidy. It allowed one of them to receive long-needed cataract surgery, which they had put off because they had no insurance.

"Sometimes people come to tears of happiness because they have just been enrolled. They may be sick and really, really need it but didn't think they could get insurance," he said. "They are very pleasantly surprised when they find out they can start taking care of some things they need to take care of. It's changing people's lives."

Cliff Clark and his ACA navigators at MHP Salud may be extremely busy people, especially with the enrollment deadline on the horizon, but they are performing a service vital to improving public health. And for that we thank them.

The deadline to sign up for health care is Feb. 15. Don't delay! Sign up today before it's too late!