When Mike Anderson arrived in Cape Cod in the 1960s as a young man with dreams of adventures at sea, many people shared the same warning: "You won't get rich in the fishing business; it's just a way of life."

But Anderson, undeterred, embraced that lifestyle, fishing his way through decades of long, sometimes treacherous days at sea in the sun, wind, fog, and ice. His hands toughened like leather as he baited hooks late into the night in anticipation of the next day's bounty. He relished the challenge of each day, the camaraderie among tough-as-nails fishermen, and the exhilarating adventure of it all. 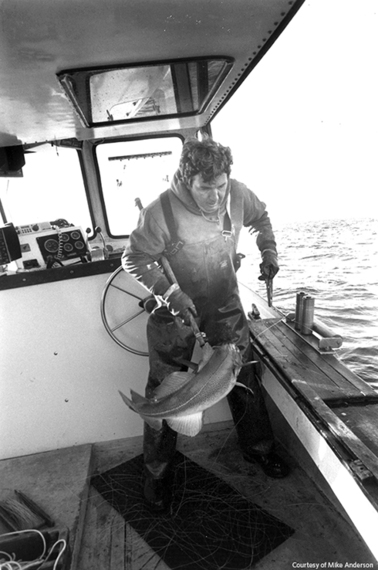 in the nearshore waters off Cape Cod, Massachusetts.

Anderson, now 72, was part of the glory days of thriving New England fishing towns, when fishermen followed their fathers into the business and old-timers spoke, only half-jokingly, of cod so plentiful one could practically walk across the water on their backs. Back then, despite early signs of decline, people still thought the fish were limitless. Most people, that is, except for Anderson.

He believed trawlers that dragged nets along the ocean bottom, scooping up vast amounts of cod, were capturing too many fish and damaging the seafloor. He stubbornly stuck to hook-and-line fishing, even as nets started sweeping up cod in numbers he'd never seen before. In due time, his two-man crew -- which once pulled in thousands of pounds of cod a day and regularly caught fish weighing 40 to 50 pounds -- began to see both its catch and the size of the fish decline. By the 1990s, the cod were so sparse and small that Anderson gave up and moved on to other species.

Anderson feels he witnessed the decimation of one of the greatest concentrations of marine life on Earth.

"The fish never really had a chance," says Anderson, who still fishes every day, both for the joy of it and to make ends meet. "It was greed, shortsightedness, and naiveté. People misunderstood how many fish there were. The world is finite, and we haven't got the right to diminish the world."

A recent study determined that the 2014 cod population on Georges Bank, located off Cape Cod in the easternmost side of the Gulf of Maine, was the lowest ever recorded--roughly 1 percent of what scientists would consider a healthy population. That's down from the 7 percent reported for 2011. In other waters off Cape Cod, the species is also in dire straits. For the fish that built New England, it's been a long downward spiral. 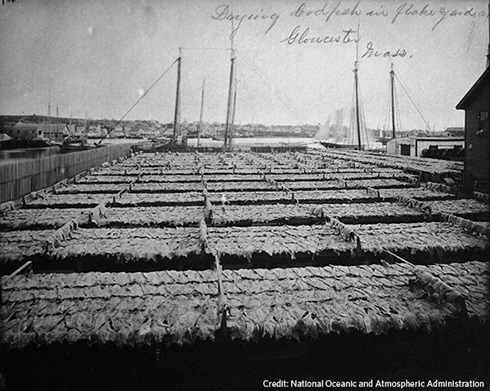 A historic photo, likely from the early 1900s, shows cod laid out to dry -- a once common sight

in New England when the fish were more plentiful.

Because other species in the region also are in decline, the U.S. Department of Commerce declared a fishery disaster in New England in September 2012, the second such declaration for the region in 20 years. As fish populations have plummeted, fishery managers have shown a consistent pattern of failing to heed warnings from scientists, sufficiently limit catch, promptly pursue corrective actions, and otherwise do what's needed to help fish populations recover, including protecting the habitat and bait fish that cod rely upon.

It's high time to finally get it right. We at Pew are urging the New England Fishery Management Council -- which sets fishing policies in federal waters (from three to 200 miles offshore), from Maine to Connecticut -- to address these critical issues:

First, the council must enact and enforce realistic science-based catch levels. Current methods of setting catch amounts are too permissive. It's wrong to let people keep fishing for the average amounts they've caught in the past when fish numbers are dropping and other environmental factors, such as warming waters, may be putting the fish populations at risk of extinction.

Second, many cod die because they are caught incidentally as fishermen target other species. Fishery managers still don't have a good handle on the extent of the problem. It's hard to set safe catch amounts when it's unclear how many fish are being taken from the water. Add to that the issues created when some fishermen misreport the areas from which they are taking fish or the size of the fish they take, or underreport their catch, and it's nearly impossible to see the big picture. Fishery managers have been too slow to ramp up their force of at-sea observers and dockside inspectors to better monitor and resolve these problems.

Third, it's unproductive for the council to consider lifting protections for important cod habitat when the fish need them most. Decades ago, in response to the fisheries crisis of the early 1990s, the federal government curtailed fishing in 8,887 square miles of New England waters where fish live and spawn, including 26 percent of Georges Bank. 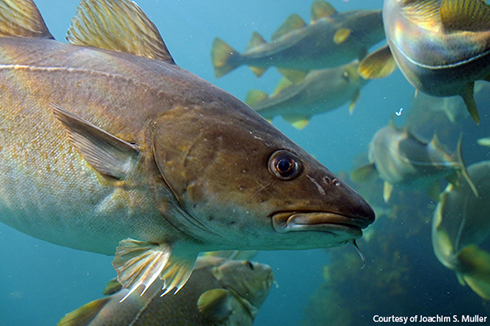 The 2014 cod population on Georges Bank, located off Cape Cod in the easternmost side of the Gulf of Maine,

was the lowest ever recorded--roughly 1 percent of what scientists say would be a healthy population.

But now, fishery managers propose reducing the protected areas substantially, including a drastic rollback of 81 percent of the protected parts of Georges Bank. Cod used to be spread throughout the Cape; but as the fish grew more scarce, scientists believed they took refuge in limited prime habitat areas within their former range. Fishermen in the past knew these spots and targeted them, further decimating the species. Why would anyone let that happen again?

Lastly, researchers know cod and other fish are much smaller today than they were decades ago. Although the cause is uncertain, scientists theorize that overfishing and warming waters are playing a role. Researchers are also baffled about what is happening to young fish. Experts know that eggs are hatching and fish are growing for several years, but then they are disappearing. These mysteries are worrisome and deserve more study.

This uncertainty makes it all the more urgent for officials to take a comprehensive view of the ecosystem when setting fishing policies -- for example, by weighing habitat, food sources, warming waters, and other factors when making decisions about how to manage a species. Pew is advocating that this approach, called ecosystem-based fisheries management, be incorporated into federal law as Congress renews the Magnuson-Stevens Fishery Conservation and Management Act. You can read more about it in our blog series here. 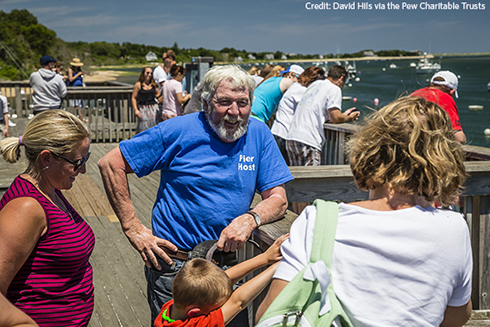 Mike Anderson, seen here on the Chatham Fish Pier in 2014, helps educate the public about fishing and

related issues as part of the Pier Program, run by the Cape Cod Commercial Fishermen's Alliance.

Millions of pounds of seafood are landed at the pier annually. (Photo via
www.fishypictures.com
)

As for Anderson, he isn't involved or weighing in on these current-day debates. Rather, the philosopher's son and English major is penning stories about his life at sea and telling cautionary tales on the fishing docks as part of efforts by the Cape Cod Commercial Fishermen's Alliance to educate the public about the history and future of the Cape's small boat fishing industry.

He wants current and future generations to learn from past mistakes. And he hopes New England's legendary fishing towns can spawn new stories of adventure and plentiful catch, instead of just relying on the memories the old-timers leave behind.