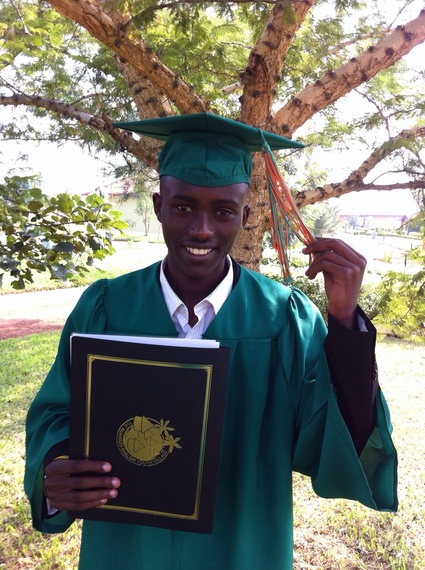 This summer marks the two year anniversary of my work in Rwanda. I have met many incredible people during this journey, and know I will meet many more. During my first week in Rwanda in May 2013, I was invited to the Science Fair at the Agahozo-Shalom Youth Village.

There I was introduced to a student who has become my mentee, Henry Kabiyona. Henry's story is an inspiring one, a positive moment that shines through the darkness of the 21st commemoration of the 1994 genocide against the Tutsi that overshadows Rwanda's history.

The Village director called one of the boys to join us at our table, whose photo I had seen in the New York Times a few weeks before. He introduced himself, and I was immediately struck by his respect, self-confidence yet humility, and his ability to think big. We spoke about dedicating our lives to helping others. He told me about his visit with the Holocaust survivor in New York, and how surprised he was by the similarities of their experiences.

He especially was surprised by how the Nazis called the Jews names, which he said happened in his own country. He was struck by how this older generation is focused on making the world a better place, and working to ensure that the hate they experienced is not repeated. The student hopes that his "small abilities" can contribute in some way. He wants to study economics to solve problems in the world.

I can tell you that the abilities of the students at the ASYV are not small. Having been a teacher, working with students and young people for many years, I can say the abilities of these children are immense. They enjoy a nurturing community, complete with family time, village time, and a secure home. Empowerment, family, and respect are a way of life in the Village, the norm, not the exception.

"My name is Kabiyona Henry, a young man from Rwanda. I was born with my twin brother Kabiyona Eric in 1993 on an unknown date but we set 9th July of 1993 as our birthday. Our parents were not alive to tell us our actual birthdate so we chose this date when we were 15 years old based on the estimates of our age at the time of the Genocide. As normal, I was born from two parents, a mom and a dad. My mom was a nurse while my father was a doctor of animals. In other words they were considered rich at that time. This made them a target during the Genocide. According to the research that we have made, our parents were very kind. They lived together with their neighbors in peace and that is why some people of that time were jealous of them. The Genocide of 1994 against the Tutsis gave these people with envy in their hearts towards my parents a way to express this.

One day, due to all the unrest in the news and stories they were hearing, my parents called all the family members together to come and have the last dinner as a family, and then everyone planned to go separate ways to hide during the genocide. My mother stayed home to prepare food for the family dinner that day but my father went to work as usual. That night guests were arriving and my mother was waiting at home and my father was late. Killers hid in his path and killed him while he was on his way home and brought his body to the house in a wheelbarrow. The house girl saw the killers coming and was very frightened and ran and hid and watched what happened next.

It was very hard for her to care for us. She was carrying me in front of her and Eric on her back and walking very long distances in the heat to get to the RPF camp for safety. I was willing to take a bottle but Eric wouldn't switch from breastfeeding and suffered and was dehydrated and needed an IV several times to save him.

Once it was safe to leave the camp, we returned to our house and lived together back in the ruined house with our grandmother. There was no door, no electricity, no furniture. My grandmother went to ask the local leader if the community work could be to repair the house because she was too old to do it and had no money. Because the community remembered my parents they were happy to come and help us. Because our parents had been very kind, the neighbors in the village helped her to fix the door and gave her some food. An organization that my father used to work for came and offered trees to put up a doorframe and make a roof for the damaged house. Because she did not want to beg every day for food, even though she was very old and had been retired before the genocide, my grandmother went to a nearby farmer to work to dig on the land to plant the grass for the cows. She worked there many days. Then she went to another neighbor who owned the chickens and offered to clean the chicken coop to get money for food keep the us alive.

When we got a little older getting school fees for us was a big problem. Our grandmother explained the problem and went to the school and begged for school fees for us. The sector government gave her a letter that we were vulnerable orphans and could not pay for school fees. This covered Primary 1. The next year for Primary 2 an organization called African Evangelistic Enterprise (A.E.E.) agreed to pay our school fees but the condition as that we could not fail and repeat two times. If you repeat a class twice you would lose your funding and school fees. At first we did poorly in schools and had to repeat P2. We knew we would lose our funding if we repeated again. We studied very hard. My brother Eric was doing a little better in school and I was still struggling very much. The whole class and all the teachers knew this problem. The school agreed that we should not repeat and lose our funding so they sent us both in to P3, even though I should have failed. When we went into P3 we failed because we were not prepared. A.E.E. said they would remove the support for school fees.

In the first year of secondary, the Rwandan government switched all studies over into English. I had studied some English with the charities and religious groups I knew. Suddenly, with this change all of my fortunes as a student turned around. In S1, I finished first in my class, shocking my grandmother and all of the teachers that knew me. When I started studying in English I was the top student in the whole class and would help the other students. When I was in S1 & S2 the school voted me head boy to be the leader of my class because of my character and because I was doing well in English. The other students appreciated that I was the one who helped them with their studies. During my free time I would gather the other students and explain the lessons that were confusing them. They were so glad and they thought I was such a good teacher that they wanted to pay me instead of paying the fees to the school since they felt that I was the one really explaining things to them.

Everyone who taught me in Primary was so surprised how successful I was in secondary school. During S2, people were getting prepared for S3 national exam. The school director came to tell me to encourage the other students to work hard on the national exam. When in S2, Agahozo-Shalom Youth Village came and interviewed me. When they interviewed me I explained that I could not be separated from my brother and and then after they interviewed my brother as well. We were both invited to come to ASYV and start Enrichment Year, which is a catch-up year prior to S4. When we first arrived at Agahozo we went in the family units in the first meeting, and we were supposed to introduce ourselves in English. When it was my time, everyone was impressed that I could introduce myself in English. Thus, I was responsible for translating for the entire family for my cousin, a foreign volunteer. I gained so much confidence from this that I could translate for the entire grade and felt confident even though I was maybe not the strongest in English in the village, I was trying the hardest. One strategy I encouraged to my entire family to follow was to practice English and speak English much of the time. This helped my entire ASYV family to improve at English and improve our studies.

I have come a long way from the child who was left for dead and the child who failed so many times. I have now graduated high school and have gained admission to McGill University. I have been crowdfunding to raise the money to attend university this fall. At university, I want to continue with economics to learn more strategies to repair economic problems in different countries. After I learn economics at the highest level I can strive to improve the economy in my home. From all of this, I have learned to stay committed to my dreams, and to seek solutions even when I am told it is not possible. For the remainder of my studies, I will continue knocking on closed doors to follow my passion."

You can learn more about Henry's story and crowdfunding initiative here.