A 10-year old child was recently arrested and charged with murder in Pennsylvania. Under existing state law, this little boy must be charged as an adult, although he can petition the criminal court judge to have his case transferred to juvenile court. This 10-year old child is currently being held in an adult county jail. His attorney informed reporters that the child was given coloring books and other opportunities to "play." He is segregated from all other inmates and is overseen by corrections officers. His lawyer reports that he thinks his jail uniform is a "Halloween costume." 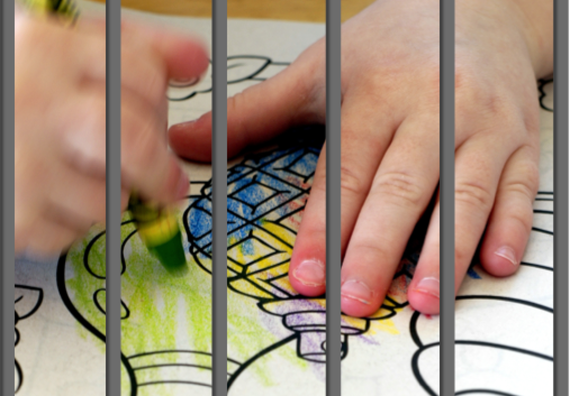 What's wrong with this picture? A lot.

Somehow, there is a sense in all of the news coming out of Northeastern Pennsylvania that because he is being treated like the little boy he is, it's okay to keep him in an adult jail - in isolation with toys. A 10-year old child. A fifth grader. All dressed up for Halloween as a jail inmate. Coloring inside the lines, watching cartoons, and talking to guards for company.

All murders are horrible crimes, and the age of the offender doesn't abate the grief of the victim's family. But the severity of the crime shouldn't lead to the loss of common sense. All of these dire consequences await this little boy even as everything we know about his competency as a criminal defendant and his capacity to commit murder belie his current status. As a matter of law, youth, including teens far older than this child, are to be treated differently than adults. They are considered less culpable for their conduct than adults because they are immature and don't fully consider the consequences of their actions. Every parent of a 10-year old child knows this. It is also engraved in law: the United States Supreme Court voted with the psychological and neurological research noting the developmental differences between children and adult defendants, striking harsh sentences for children and requiring greater protections for child suspects during police interrogations.

How would this little boy assist in his own defense? It is delusional to think that a 10-year old has any idea - except as a fantastical TV or cartoon image - about what is going on in the court proceedings swirling around him. Our Constitution requires that criminal defendants have specific competencies to understand the charges against them, understand the roles of the various parties in court, and be able to assist their counsel in preparing a defense or making decisions about trial strategy. Anyone who thinks a 10-year old can meet that constitutionally mandated standard, please raise your hand.

It is also well known that children held in adult jails are at far greater risk of physical and sexual assault, and suicide. So yes, in a perverse way, it makes sense to keep this boy separate from adults while he is being held in an adult jail - but he shouldn't be in an adult jail in the first place!

To rationalize this child's confinement by segregating him and keeping watch not only underscores these dangers, it also ignores other uncontroverted research findings about the traumatizing effects of isolation on children and the important distinction between juvenile justice professionals and prison guards. All children need daily contact, love and support from caring adults - especially children who have been charged with serious crimes and who may have mental health needs. Children require special care to stay on course developmentally, to enable successful return to their family and community, and to reduce further offending in the future. This is the real measure of how to best promote public safety.

Coloring books have no place in prison, unless in the hands of an incarcerated parent drawing with their child who has come to visit. To give a coloring book to a child inmate is a disturbing, not playful, image. It confirms, in that simple gesture, the wrongheaded thinking behind a law that would allow the adult confinement and prosecution of a 10-year old child. And while the District Attorney correctly notes the trap of Pennsylvania's law with respect to the initial charging, the prosecutor also has the authority to simply consent to his transfer to a juvenile detention center, and may leave the petition for transfer to juvenile court for prosecution unopposed.

As long as we're using crayons to color our judgment, let's draw a different picture.