Comet 67P/Churyumov-Gerasimenko (I'll call it Comet 67P) has been minding its own business for billions of years as it quietly looped around the Sun every 6.5 years. Discovered in 1969 by astronomers Klim Ivanovych Churyumov and Svetlana Ivanovna Gerasimenko, it spins around on its own axis every 12 hours and is about 2 miles across. Even with a mass of 10 billion tons, it is still small compared with the giants of its class, like Hale-Bopp, at 40 miles across! 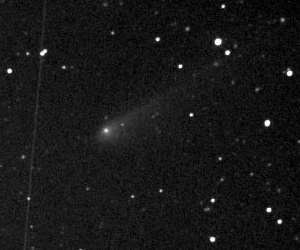 So far, spacecraft have visited Halley's, Tempel-1, Hartley-2, Wild-2 and Borrelly, so Comet 67P joins a very select group of "dirty icebergs" gliding through space in orbits favorable for human scrutiny. Despite their brilliance in the night sky, their hard nuclei are as dark as aspault, reflecting less than 5 percent of the sunlight that falls on their surfaces. Far from featureless ice balls, they show amazing surface detail that in most cases has been studied at high resolution. Take a look at this recent image of Comet 67P taken by the European Space Agency's Rosetta spacecraft just this August: 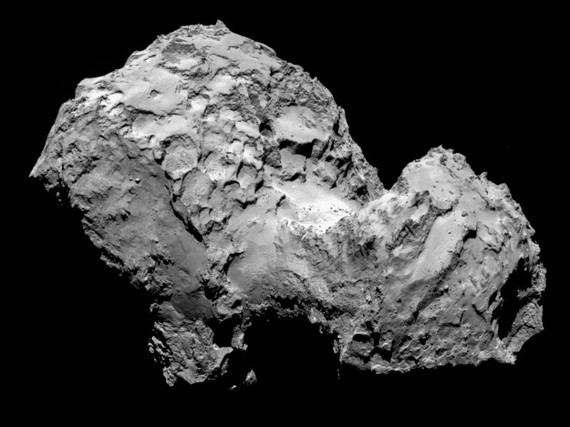 At a resolution of about 15 feet per pixel, what you are seeing is details about a few hundred yards across speckling the entire potato-shaped surface. But even higher-resolution images are now possible as the Rosette spacecraft settles into an orbit only 19 miles above the comet's surface. 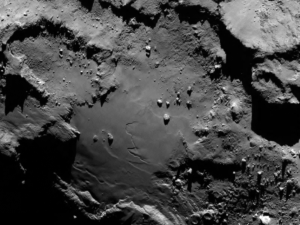 A stunning close-up from a distance of 70 miles (credit: ESA/Rosetta/MPS for OSIRIS Team)

Here you see boulders a few dozen yards across sitting in a depression where they have probably been for the last million years. Then there are surface shapes that look like landslides, which we shouldn't find surprising, since the surface is constantly eroding as it evaporates. What is bizarre is that this cosmic iceberg has so little mass that it barely has any gravity at all. So how does the debris "know" to move in one direction that looks like down-slope to us? Does the centripetal force of its 12-hour rotation help, somehow? 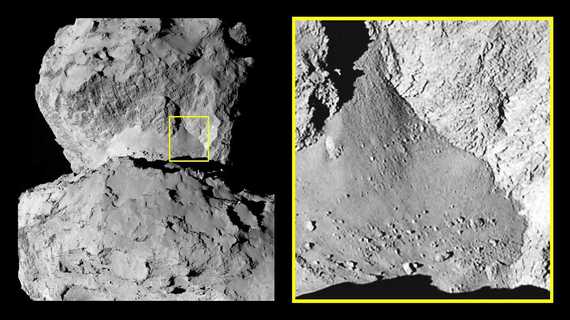 In preparation for the November landing of the companion Philae spacecraft, Rosetta will have to take up an orbit only 19 miles above the surface of the comet to look more closely at possible landing areas. So far about eight have been found that look safe and interesting.

Because the gravity of the 10-billion-ton nucleus is so weak, Philae will actually approach the surface at about 2 miles per hour and "dock" with the surface, just like NASA's Space Shuttle used to dock with the International Space Station. To avoid bouncing off, Philae will immediately launch two harpoons into the icy surface to anchor itself.

The comet reaches its closest point to the Sun, called perihelion, on Aug. 13, 2015, and the Rosetta mission ends in December 2015, so we will at last be able to see how the comet nucleus outgasses to form a tail. Because perihelion is 30-percent farther from the Sun than Earth's orbit, the comet will not heat up very much, so the flow of vaporized water and other volatiles from the surface will be pretty weak. The comet's diminutive tail will only be visible with a telescope. From the surface, Philae may only see a thin fog as a hint that the process is occurring; hardly the conflagrations you saw in the movies Deep Impact and Armageddon. Still, the instruments on Rosetta and Philae will be able to sniff what comes out to form the tail and search for organic molecules and amino acids frozen for billions of years while the comet has lapped the Sun countless times. Even at its closest point to the Sun, it will be invisible to the naked eye, some 100 times fainter than the faintest star you can see. Even a small telescope will have trouble distinguishing it from the countless other faint stars in the field.

All in all, it will be fun to see what turns up in the Rosetta and Philae images and data from this comet! Astronomy is always full of surprises when you see something at high resolution for the first time.

Landslides on comets... who would have thought?