Bonnie MacAllister is an artist based in Philadelphia fusing art and social statements. With her latest fiber works, MacAllister is embroidering images of influential women around the world. 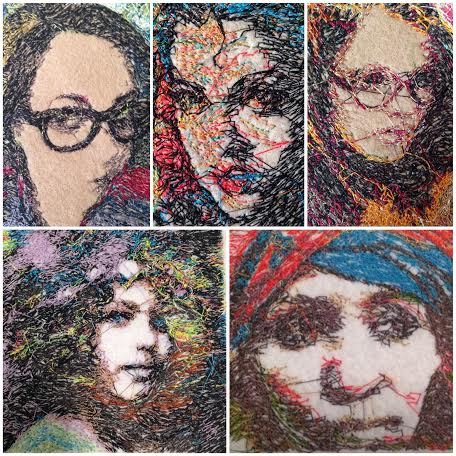 "When I first moved to Philly I had a lot of time on my hands." MacAllister told me on a summer evening. After finishing with her day job, we met at the office she has at Culture Works, where she conducts business related to her artistic work. If she is not at her day job, or making her art, MacAllister is taking a class or being an active participant in art communities. Putting in all this time for her work is more than typical, "it is a basic need" for her.

"I started going to these social events with poets, but I needed something to do with my hands, so I would even be there sitting knitting at these events, I really liked to sew, my grandmother taught me, I was born on her 60h birthday. I like to be able to spin my own yarn and create materials and I guess that comes from this love I have for things that remind me of my grandmother."

While her grandmother did not teach MacAllister to spin yarn into thread, they would talk about fiber arts and read books on knitting and sewing together. The wheel she spins fiber into thread on to is the only one of its kind in America, MacAllister tells me. The others are exclusively used in Tanzania. The spinning itself, she learned when she went to Ethiopia six years ago on a Fulbright-Hays award.

"I think a lot about Ethiopia, it's almost Ethiopian New Year, and I'm still drawing the women I met there, still drawing friends of mine that are there and turning them into embroideries. I went over and got to spend a lot of time with the fiber communities there, and that's where I learned to hand spin, in Ethiopia. Every time I spin (thread), I think of Ethiopia."

Many aspects of the fiber communities in Ethiopia she visited appealed to her, but one thing stood out to her. The community itself and the ability for fiber arts, whether spinning, weaving, sewing or knitting, that across cultures these activities were social activities that created bonds.

"The families work together on weaving, it's cooperative, but I think a lot of fiber work is like that, being able to learn fiber, show other people, and keep the tradition going. For me, I know I have things I didn't learn from my grandmother, but because now I'm part of the Philadelphia Guild of Handweavers, I'm learning from all of those people over there. Master felting classes, spinning classes. I feel like I found what I really wanted to do with my art."

"It's kind of a labor of love, but it takes me a long time, I'm at the machine at least three hours during the base of a piece, after that I hand sew for hours and hours and hours."

MacAllister also concerns herself with where all of her materials come from. That the materials are sustainable, eco-friendly and accessible to all is of the utmost importance. "I go to every fiber festival I can," she explains of how she obtains her materials, "I go to farms, sheep and wool festivals, and I make sure I get materials from places where I know my money goes directly to that farm and that family and their animals. I get silk from Darn Good Yarn, a nonprofit that helps women in India and Nepal earn a living wage. There is a place out past Lancaster called the Manning's, where you can just go to this enormous barn, and just get materials directly from those folks. And I seek out materials when I travel, l was in Taos and I made sure I went to a weaving collective, a store in downtown Taos where I spent a lot of time talking to the people who ran in. I thought it was hilarious, they told me, 'Oh, Julia Roberts got some of this last week.'"

Prior to the embroidery, MacAllister was focusing on painting and poetry as her artistic mediums. In 2014, MacAllister was involved in The Ragdoll Project, a community based art project that create awareness about human trafficking. Through Philadelphia Women's Caucus for Art, women made ragdolls from hand; the dolls have since traveled to galleries and events internationally. All proceeds from project continue to go directly to women in America and abroad that are survivors of human trafficking and sexual exploitation.

For MacAllister fiber art is very fulfilling because of how physically interactive it is as an art form. It is also about more than the feeling of making something by hand. "For me," MacAllister said, "fiber has always been about being with people."

In Philadelphia, there are a few artist communities that MacAllister is involved in that help nurture her growth as an artist. At NextFab, a manufacturing co-operative located in South Philadelphia, she uses machinery to create the embroideries.

Of the process, MacAllister told me she starts by creating a drawing or sketch of a photograph, which she is then able to scan into the machine. "I work collaboratively with the machine." She said, "You hand feed every single thread, it's more like painting and using the arm of the machine to help guide it. I get to do a lot of really straight lines and forms, just like an outline, almost like a line drawing in thread, and then on top of that I build little layers of hand sewn embroideries." Each portrait, even working collaboratively with the machine, can take days to create.

"It's kind of a labor of love, but it takes me a long time, I'm at the machine at least three hours during the base of a piece, after that I hand sew for hours and hours and hours." 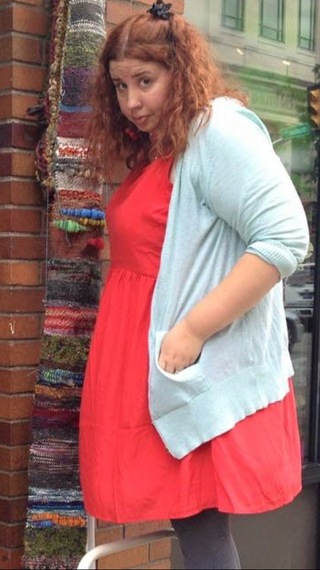 MacAllister with a 'yarn bomb' Photo courtesy of the artist.

As for incorporating social issues into her art, it seems to come naturally to MacAllister. "I'm one of those people who always really cared about communities, even as a young teenager." She finds it not only therapeutic for herself, but for everyone involved. "I found community groups to get involved with, through art making I found it was very comforting to a lot of people who are survivors of different violence, to come together and sew together, to come together and paint a mural, to come together and knit bomb a neighborhood. That can be extremely constructive for people to channel things into art, for me I always channeled all of my things into art."

A version of this article first appeared at Broad Street Review and can be found at this link: http://bit.ly/1WjKCdX