On the one end, there is Howard Stern. Have you caught on to his penchant, which is to mine the headspaces of his musical guest artists? While Stern wears his suppression schtick like a sash o' badges and purports to be unable to hold a tune, his delving, to try and understand just what it is from where words and sound come together as original songs, redeems the "shock" chat for which he is better known, and makes for some of his best interviews of all.

On the other end is artist Carmelo Blandino, who I featured alongside Hunt Slonem in an earlier article entitled Kindred Spirits, published here at HP. Having interviewed Carmelo rather extensively, I know his receptivity to inspiration is a major definer of his very existence. Blandino's intuitive communications with his unconscious self help illustrate the link between the inner creative process and its outcome. In his words:

I bring my body to the studio out of habit. I've trained myself to do this so that the triggers of being in a studio immediately put me in a condition of receptivity. I am creative everywhere I go, so I prefer to respond to it in my studio, where I can use paint because its my preferred method of expression.... I then wait for very brief moments in the Now and remain in stillness.... fully aware of my presence within my body. That stillness within, which I observe, is communicating with me. There is a flow of direct knowledge that is transpiring... communication from the conscious to the unconscious. I walk... trusting that something will transpire. Once it "downloads" into me I can feel that surge or sense of urgency to put down onto my canvas whatever is feeding me at that moment. This can be as quick as a few minutes or last through the evening. I've come to recognize that my body is capable of working quickly and responds quickly to what is being given to me.... Often I've worked on several paintings throughout the day (and) into late night and not realized the body of work I've created. It's a sense of timelessness that takes over, as that is when I am in the presence. It's a void where space and time disappear and truth of being emerges. Creativity is presence. 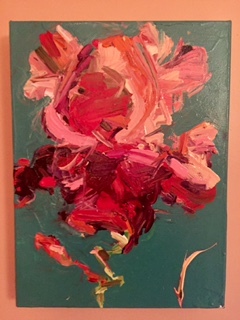 The full spectrum of creativity and the building of individual legacies can be as vastly different as the two above-mentioned men are. But creativity is the tie that binds, whether as giver or receiver. It is the drive, the voice, the language, I wish to explore in this part II HP article, my follow-up to So There: Hunt Slonem & What I learned On Kindergarten.

In Roman mythology, the birth of Athena, springing full grown and fully armored from the skull of her father Zeus, is a classic metaphor for the endocept transmogrifying into an exocept. It is an explosion of a something, fully grown, with a life of its own. These terms are rather new, having been coined in the mid 70s by psychologist Silvano Arieti (1914-1981). They are nearly unknown in laymen's conversations on creativity. Try looking them up online - our most basic indicator today of that reality. Try typing them without a corrective override by your computer system. Their absence in online dictionaries and in my auto correct proves as much.

It is to the everyday, Arts-based vernacular that I would like to add these two terms I learned of as student, which have stayed with me for their logical clarity and usability.
They break down Inspiration's Before and After. The following definitions are mine, based on Arieti's original text:

Endocept - is the innerly held, subconscious creative stream/idea still not fully formed, an in-process creative fermentation that resides within the chambers of the mind (aka the soul), below any level of awareness. Arieti referred to an "incubation period."

Exocept - is the endocept manifested up, out and into the consciousness of the creator in what seems fully formulated fashion, a creative concept/thought entity that can appear to explode into one's awareness, for which creative action - often fervent and feverishly paced - is undertaken to realization and completion.

Having studied creativity and creative thinking as a student and having experienced it first hand, I know what it feels like to be energized by warp drive-level inspiration, when what I produce is so torrential in its outpouring and so completely formulated that it's all I can do to keep up with the explosion of words or images I am compelled to put to paper or canvas. I know the Drang when inspiration kicks into high gear, and I have not the least bit of fear of the Sturm that often triggers it. Hurt and struggle, integral to being alive, are an artist's necessary blessings in disguise, for it is from this darker place that the Muses speak, more profound for their soul bearing and spirit flaying.

I have also, in the throes of some work, experienced prolonged peaceful periods, where a blissful state of focus takes over. Time, time of day, day or night, mean nothing. To call it a "creative high" is no misnomer or understatement. And that high? It gets in the way of the everyday. It can be utterly jarring to be pulled back, up, out and into the present moment from some creative immersion. It does not make for easy civility when reality comes knocking.

Creative output, competing directly with the ordinary everyday and with basic obligations to self and loved ones, leaves me to conclude that one's Muse is also one's gremlin. And there's that tangential line crossed when the need to self soothe (like a fat pour of red wine at 2 a.m.), to bring self down from some euphoric, creative high, becomes the challenge. Even sleep and dreams come to be seen as welcome conduits for inner threads of thought and even full-on stories, rather than a time of rest.

Think on this a moment: I am willing to bet you have experienced this too, at some wonderful point, when what you were doing was everything and everything else was nothing....

The Addictiveness of Inspiration:

Inspiration, that insistence to create, comes from deep within and is seldom in synch with that which otherwise fills life to the gills. And while it comes with its assorted ills, those who have ever been in its addictive thrall cherish the experience and want more of it.

I look back on creative projects and sessions with not only a basic sense of accomplishment, I recall the feeling of being so wrapped up in the process, with a desire to go back there again. It's the kind of pull an extreme athletes might feel, once back at home in the safe and sedentary, where memories of pleasure mixed with pain and fear blend into a singular, irresistible intoxicant. Having always been fascinated by those who seek goals involving maximal hardship, I think of mountain climbers. Humans who trek up Mount Everest must accept the possibility of death as an integral part of the experience. I believe they seek something akin to what all true, laboring artists want out of life: For every accomplishment, it is the journey there and back that beckons time and again - the deeper and the darker it is, the brighter it is at the top.

I believe creative energies are messages and histories carried over time and multiple dimensions, both internally and externally derived, whether in our DNA or as the metaphysical counterparts to physicists' String Theory, where the connectivity of all intelligent beings comes together at that miraculous, incalculable spark. Our creative endeavors connect societies and individuals over vast spans of time and place like nothing else does. Picture a pyramid. Think of Mozart. Imagine our beautiful Earth as seen from our Moon. Creative expression takes one over millennia and to the heavens and back again in a moment. Creative doers - they perch comfortably on the very event horizons scientists and mathematicians laboriously seek and tally via sequential symbols, numbers and letters, which are themselves representational, creatively wrought pictures borne of the universal, binary reality that is 1 and 0, yes and no, To Be or Not To Be.

Those with imagination are our soothsayers and societal catapults into the future. Creative endeavor, aside from the fundamental function that is reproduction, is our best, living attempt at immortality. The spark that makes out of each mere human a creator links him or her to all sources, past, present and future. It is the closest thing we mortals have to forming and then even naming our very own constellations.
Man procreates; Art elevates.

The Need to Support Creative Output:

The fight to acknowledge the full spectrum of creative expression is as vital as is the fight to keep the Arts in our everyday and in our schools. It is likewise a beautiful key that helps unlock the doors to global societal evolution. As I noted in an article published at Huff Post back in 2014, In Support of the Arts as Conduit for Extreme Expression and Catharsis, I continue to maintain, with all my heart, that:

Through support for and access to the arts, we give each and every member of society the opportunity to evolve through their expressiveness, no matter how contrary it might be, for in confronting and coming to understand the expression, we are not struck down but allowed to move forward together. 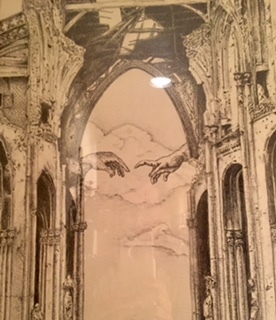 Original Painting, 2015, by Carmelo Blandino, property of the author
Original Drawing by Kimann Schultz at age 15
All photos by Kimann