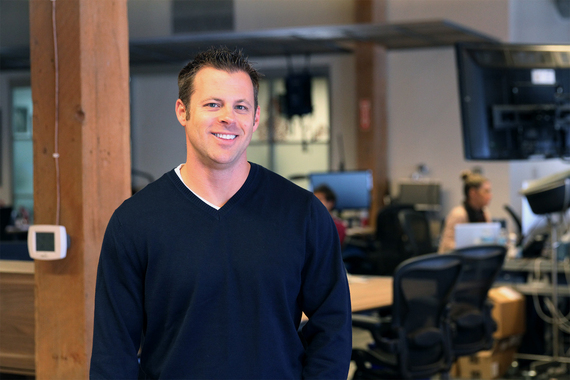 At one of the hottest tech conferences in San Francisco, the entrepreneur and CEO shares his insights on what it means to lead a successful organization, plus habits and virtues that keep him balanced and effective.

Brad Hunstable founded Ustream more than seven years ago with a vision to bring video broadcast technology to the entire world. Ustream is the leading video platform serving the needs of enterprises and media companies around the world. In 2016, Ustream was acquired by IBM, Inc. In 2014, he was honored as one of the SF Business Times "40 Under 40" for the most influential young leaders across the spectrum of Bay Area businesses. He has been ranked among 50 "Digital Power Players" by the Hollywood Reporter and on Variety's Producers Guild of America's Digital 25: Visionaries, Innovators and Producers for his work at Ustream. He is a graduate of the United States Military Academy at West Point and holds an MBA from Ohio State.

What kind of advice would you give to your younger self?

I've learned as an entrepreneur from experience. A lot of it is intelligence but the most important thing is drive. Startups are like a rollercoaster. In those moments of when you're at the lowest of low, if you stick with it, get around the corner, you'll figure out a solution. I wouldn't probably worry as much as I did as an entrepreneur. Keep working at something that you love and you're passionate about. For most of the things, you'll figure out a solution.

How do you find focus?

Well, entrepreneurs in general have a bug that they always want to create, at least I do. I love our product, I love to build. I've seen a lot of friends of mine easily be distracted by a lot of different companies, a lot of projects, and when you believe in a vision, you believe in a market, if it was easy, if it was obvious, people already would be doing it so the very nature of what you're trying to do is going to be hard, complex, and without focus, there's just no way you could succeed. In our case it was video. When we started Ustream in 2007, the founders of TiVo told us our idea was crazy, right? And now we've built a company with 200 people, tens of millions of dollars in revenue, raised a lot of venture capital, touched millions of people through video every single month. You know if we'd listened to people who had been through it, that focus wouldn't have been successful.

Do you have any daily rituals or habits?

I like to wake up early, a little bit early. I try to be the first person in the office or one of the first. It's quiet, I can sort of plan out my day. I went to Westpoint and I spent five years in the army. I think a lot about how to effectively execute and operate and get a lot done in the day. A lot of the lessons I learned from the army I bring to the startup world and I think it's very similar things that you need. I'm pretty methodical in terms of the planning, pushing meetings that don't matter. Be very careful with your time. Time management is obviously key. I've realized over the years as I'm getting older is you've got to still take care of your body too. I used to kill myself in the early days, working these crazy hours. I was eating bad. I realized you've got to still take care of your body too and mind, because the mind and body are connected.

How do you implement feedback or how do you get people that can coach you so you can constantly improve?

Have mentors and advisors. You know, I'm not afraid to go to someone very high profile and ask them to mentor me. I've always been like that.

Very direct. I mean I think you have to be direct because if you don't, when you want to try to build a relationship or two, there's people who've been very successful that have seen a lot more than you that are willing to help you out. I've been harassing John Donahoe, the eBay CEO at a random little party, restaurant or gathering, just saying, "Hey, I'd love to ask you a couple questions about business and how you got to that level because one day I'd love to be a CEO of a company. Can you have breakfast with me?" He said, "Absolutely, shoot me an email." You have to be direct. There are people that can help you but they are usually very busy or have other jobs going on but they can provide a lot of great advice. So you should seek them out and just be very friendly. The other thing is you can hire and there's actually some value to this, particularly as you get to a later stage, having true executive coaches that you would pay for this but there's a lot of really good ones out there that can just tell, I was never a CEO.

How do you build relationships?

I try to make it organic and natural and you know, the key relationships take time so you have to do follow up, you have to see people and so it takes work, particularly if you're running a company and you're one of the founders or CEO of the company. If you want to build partnerships or relationships with investors, potentially to recruit people, you have to follow up and see them occasionally. So you have to put in the effort. You can't just expect to sit in a room all day and code and build a relationship with someone, particularly even virtually or over the phone, you need that face to face connection. And then when you have a crisis, which every startup has, where you really could use some advice, see who'll take a call. I've had times where those moments have drastically impacted the success of our company.

How do you balance these times when you have to think and be strategic and when you need to execute?

It's real hard. It's one of the hardest things about scaling a company I've learned and I'm still learning it. Sometimes you just need a whiteboard but then a lot of what makes a successful company, there's probably 10 companies that are all doing the same thing out here. So what is the difference between those companies? You have to take moments where you step back and actually think about the strategy. You have to pull your team outside the office and do strategy sessions. You have to talk to people. You have to find time to do that stuff and in my experience as a CEO, you have to empower great people but you still need to know what's going on in the business. You've got to help them, facilitate them, give them the resources they need, make sure the ship's still moving in the right direction, left to right, and that's going to be more on the execution side. 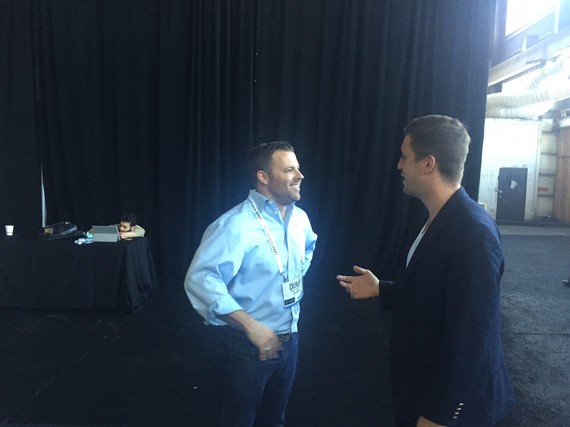 How do you control your emotions, particularly at times when you're anxious or something is overwhelming you -- what do you do then?

When I'm anxious? Every emotion is different, right? So there are moments when you're really mad and as the CEO or founder of a company, there are times when you want to show that emotion but there are probably a lot of times when a better leadership tactic would be to take a step back, to reflect because what I've also found is that when you're mad about something, at an investor, an employee or a tech competition, what you do in that moment is usually different if you were to think about it the next day. So the more you can write that email but then take a break, the more you can get perspective.

What's the best advice you ever received?

Best advice I ever received was from a guy named Greg Ruff. Never forget his name, met him once. He was an entrepreneur, tech entrepreneur. I was asking very similar things about business and tech and asking some questions and he said, "You know, being an entrepreneur, starting a startup is a lot like playing a basketball game. You shoot at the basket and you probably miss. And you shoot at the basket and you probably miss but if you just keep shooting at the basket, eventually you're going to make it in." And he said where he sees most entrepreneurs fail is they just stop shooting at the basket. And little do they know if they'd shot one more time, right around the corner they would hit. That's clearly not the case in every case, but I'm always trying to keep that in the back of my mind.

Why did you focus on this idea and not other ideas you could have pursued instead?

For me, I've always had a passion around photography. I've always had a passion around video. We, back in the early days of the internet, experimented with RealPlayer, Windows Media Player and all those sort of technologies. Pictures can be an incredibly powerful emotion. Words can bring tears to your eyes and videos are perhaps out of all of those, if done correctly the most emotional medium in the world. It's that real human connection. For instance, we have a product that does internal streaming for CEOs and training. You could be in an office 1000 miles away and see that person's facial expression and his body language. So much communication is around this stuff, right? You need to feel the emotion more and video does it better than anything else.

How do you plan your week with all the things that you have to do? How do you prioritize?

I keep an ongoing notebook and every day I update it. Things that were on the first day, I carry over. I try to get as many of those off as I can in a day. You have to delegate, particularly for higher priority items. It goes back to focus. You're still one human being so what are the two or three things you're going to work on and everything else someone else has got to do. That's because if you don't do your job -- as a CEO your job is vision, your job is to bring talent, your job is to make sure you don't run out of cash -- if you don't do those things, then your company is going to suffer and someone else should be doing the other stuff.