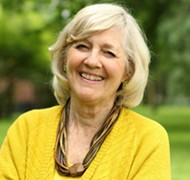 Ellen Goodman is one of our most wise and most widely read columnists. She's a Pulitzer Prize winner and was the first to open up the Op-Ed pages to women's voices. She has written extensively about social change in America specifically about the women's movement.

Ellen began her career as a researcher for Newsweek magazine in the days when only men wrote for that news weekly, and then went on to have her own column which has been widely syndicated all over the world for several decades.

More recently, in 2010 she founded The Conversation Project. The purpose of that project is to make it easier to initiate conversations about dying and to encourage people to talk with their loved ones about their end-of-life wishes.

TARA: Ellen, thank you for joining me today.

ELLEN: It's my pleasure.

TARA: The first thing I wanted to ask you about is a quote that comes from one of your columns that just made me exclaim, 'how does she just capture the spirit of a whole movement or a whole moment so succinctly and so beautifully?'

You said, "My generation of women thought the women's movement would advance on two legs. With one, we would kick down the doors closed to us. With the other, we would walk through changing society for men and women. It turned out that it was easier to kick down the doors than to change society."

Can you share a little bit more about that?

ELLEN: I think when we first began the women's movement, there was this sense that the women's movement was kind of 10-point program. It would be reproductive rights. It would be equal pay for women. It would be childcare. When we checked off that list, we would be done. But as you discover, every change that you make makes for more changes that are needed. Also, I think that it was easier to open up college and law school and medical school to women than it was to transform the way that those institutions work.

You have a situation where as long as women's lives are exactly like those of men, you can have equal pay but in fact women's lives generally aren't exactly like those of men. You have a situation for example where as long as nobody is a caregiver, you're all treated equally. But when men and women want to take care of their children or increasingly their parents, they run into that other wall which is the social change wall. That one example of caregiving can be repeated across the spectrum of a million different things.

TARA: What I find so fascinating and troubling about that is for my generation it was like, 'oh everything is fine now -- things are equal, equal, equal.' It took me a long time to understand that I was still in a very patriarchal institution -- at college for example -- because the institutions hadn't been transformed with coeduation.

ELLEN: I think for so many women we actually get a bit confused and it can result in feeling very alienated from ourselves. We're operating in a system that we think is supposed to work fine for us and it takes a long time to see that the ways things are setup don't work for us, don't resonate with who we are, don't fit with women's lives...

One of the things that I have seen happen is that when you do run into barriers, you tend to think it's your fault because you've been told that the barriers are down. If you experience them then you think, 'hey, it's just me. Why can't I overcome these barriers?' That is sort of where my generation began. We began thinking we were having individual problems -- but then we came together during the women's movement and started talking to each other.

This very much relate to where we are with The Conversation Project -- so hold this thought. We came into collective groups and we started sharing our experiences and guess what, you know, there was that click of recognition, there was that understanding, "No, I'm not the only one. We're all having this experience." That click of recognition and that connection produced a lot of the social change.

And then fast forward, we're living in a different era now. We're living in an era when people are again more isolated. We're back all the way through to people once again thinking, "It must be my fault. Out there, there is somebody who is making it all work perfectly. That belief really puts a lid on the kind of social change -- the next generation of social change that we need."

Thanks for reading Part 1. Part 2 of my conversation with Ellen Goodman is coming up next week. To learn more about The Conversation Project, click here.

Tara Sophia Mohr is an expert on women's wellbeing and leadership. A coach, writer and teacher, she is the creator of the global Playing Big leadership program for women. Visit here to get Tara's free guide, the 10 Rules for Brilliant Women Workbook.

Expert on women's leadership and wellbeing