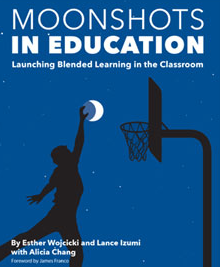 Esther Wojcicki is an award winning journalism teacher and the author of a new book on education called Moonshots in Education: Launching Blended Learning in the Classroom. The book explores digital and online learning with models and examples from schools that are already implementing digital learning.

Moonshots is an approachable book that's part Wojcicki philiophy and part tips and advice from her co-author Lance Izumni and contributors Alice Chang and Alex Silverman. Actor James Franco (a former student of Esther's) wrote the foreword. One of my favorite passages is about a culture of trust.

The first thing to establish in a classroom is a culture of trust. That doesn't mean the students are given complete freedom to run wild and do what they want; it means the students trust each other to help in the learning process and the teacher trusts the students.

The interview you can hear below, a conversation really, is more than just about the book. It's about an educational philosophy that stresses doing rather than just studying and is based on something quite radical in education -- respect for students.

And the reason I call this a conversation rather than just an interview is because Esther touched on subjects that are near and dear to my heart as a former educational reformer back in a different era.

Click to listen to my CBS Radio News conversation with Esther