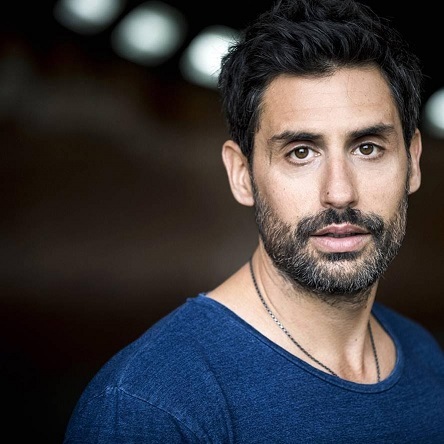 René Ifrah has some history that is verrrrry interesting. Most people have roots in one place; this guy has roots in several. How has this helped with his Homeland character?

On Homeland, you play Bibi Hamed. Tell us about your audition.

I originally auditioned for the pilot. Recently the show moved to Germany from where the Casting Director Simone Baer, suggested me for several parts. The Producers liked me but kept sending me other parts they felt I was more right for. After taping myself for Bibi, I got the call that I booked it and had two days to fly to Germany and stay for four months. As far as the accent, I did what I thought was right for the character. The character was still being fleshed out by the writers even when I got there but it was clear given the story line where the character had to have come from and what accent he needed to have. We settled on someone who grew up in Germany but had a middle eastern background.

What's it like joining Homeland in the 5th season and working with actors who have already established relationships from the previous seasons?

Initially it was tough. I was incredibly nervous. To me, the show is a big deal and it took a while to feel secure no one was going to tap me on the shoulder and tell me they made a mistake.

I knew some of the German cast, some of which I hadn't seen in years. Being able to commiserate helped jitters. The first day was interesting because I needed to start switching into German with a part American crew, part German crew and then act in both German and English with a German middle eastern accent. If that sounds confusing to you imagine how I felt. It was new to me that you get little to no information about your character or what's going to happen since the writers are still figuring things out. That made things interesting but being that I wasn't alone in this and I could see that the results could absolutely be trusted I was eventually able to let go and just enjoy the ride.

You took a role in Germany for three weeks, which turned into 11 years. How did you manage just "picking up" and leaving your family?

I ended up in Germany initially to get some distance from New York and explore my roots. Once I hit my early twenties I was a bit unclear about what path to take in life so I figured taking a trip might solve that. I only had a two week ticket but realizing that two weeks wasn't enough, I ripped up the ticket and stayed figuring no matter what at least I'd have an adventure. That turned into total of 11 years and a film career in Germany.

You were born in Germany but grew up in Brooklyn, NY. At what age did you move to Brooklyn and why, with who?

My family and I moved to Brooklyn when I was around ten. My father lived in NY previously for several years and loved it. Brooklyn was a bit of a shock to my mother's European sensibility though at the time. I took to it immediately. The friends, playing on the streets. The beach was only a thirty minute walk away. People are sick of hearing this but it was a New York nonexistent today. The neighborhood characters, the freedom we had in those days was amazing in retrospect. Taking the train as an 11 year old alone to Times Square with friends when it was still "Times Square". We were on our own to explore our environment. It was normal. In many ways life was like what you see in the movies of that era. We literally used to call up from the streets to each other to come out and play or have our mothers call down to the street from the window to come home.

Tell us your family history.

My early childhood was spent between Frankfurt, Germany and Sicily, with my grandparents. Vacations and Holidays where spent near a coastal town called Pozallo. My affinity for good food, specifically Italian food comes from there. Bringing fresh baked bread from the baker to my grandmother every morning. Only half a loaf would survive the few yards from the gate to house. Then we moved to NY, my grandparents joining us several years later. My mom is German, my dad Israeli. He was born in Morocco as a Sephardic Jew and then moved to Israel as a little boy and grew up in a Kibbutz. They met in Israel, while my mom was working as a stand in for Romy Schneider on a film with Richard Harris. My father was a singer performing in clubs in Tel Aviv.

You've done theater. How is that different from television?

Well, most of my on camera work has been films, rarely if ever series and never a series for such a length of time. And the difference between a series and a film is that in a series you never know where it's going to go. Even more disconcerting, your character backstory might change completely as you go along because it hasn't been established yet. So your constantly floating in limbo a bit. For a film, similar to a play, you have a script in which the parameters of your character and story are pretty much in place. You can always work on them. Get new ideas, perfect the character, improve the character. In a series, that seems less possible it seems. You have to be much more flexible and follow directions. At least that's what it feels like to me. As far as the difference between Film and theatre, that's more of a technical difference in terms of performance. Not so much the work of the character. That remains the same. In Theatre I would say you project more and adjust your behavior a bit more to reach the last row where as for the camera you have to adjust your acting much more to the Lens of the camera, the mic you're wearing the boom, the angle etc.

Do you have any scars?

A few. One over my right eye came as a result of a fight I had as a kid in my neighborhood. That wasn't uncommon in Sheepshead Bay in the 80s. Most neighborhoods back then where divided into territories run by young street gangs that defended their turf. Sounds dramatic today, but that's actually how it was. It was just normal.

Not at all. I didn't pick my name to begin with and don't really feel defined by it. As the saying goes "That which we call a rose by any other name would smell as sweet." My wife would probably say I smell pretty sweet regardless of an accent above my name.

What are your food and workout routines?

Ask anyone that knows me and they'll tell you I like to eat. If there was one thing I could see myself doing other than acting, it's cooking. If what I put in my mouth doesn't have flavor, it will literally put me in a bad mood. Who knows what Freud would have to say about that. Exercising keeps the pounds at bay and truly makes me feel balanced and energized. I work out regularly and run.

I'm off to Leipzig, Germany for a few more weeks for a guest starring role on a German television series, then head home for a while to enjoy some quality time with friends and family. I've barely been home in the last five months so I'm excited to see everyone. Plus, sometimes I worry people aren't going to remember who I am.