I was surprised that Juliette Binoche was more beautiful in real life than in the movies. As she took her seat at the Mandala Beach restaurant in Cannes, right before the Mediterranean sea, she stepped lightly and firmly, with fresh verve. Adjusting her purple silk dress, with black strips chicly stripped down the sides, she looked up brightly and briskly and -- a greater surprise -- answered each question about Kiarostami's new film Certified Copy (in which she stars) with meditative reflection. I was not used to this kind of full-minded response from an actor.

"What does copy mean to you?" I said.

I had just heard Kiarostami himself on the subject. 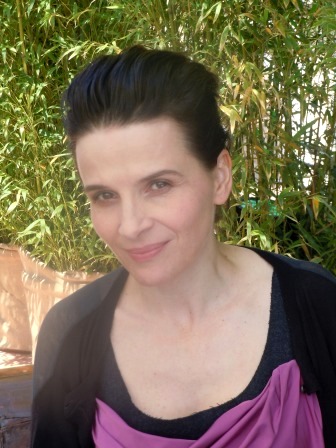 "The copy is an original as well," she answered immediately, in a perfect confident English. "For example, filming is a copy of life, but I would say it is a recreation of life. You choose what to put into the space. The intensity of the result can be even more than what we call life."

She continued eloquently -- inspired, deviating from the press kit quotes:

"The sincerity of the moment is what matters. Whether or not it is true, it is like when you dream. You cannot say it is not true. The same with your memory. What you remember can seem true. Reality with a big R is always somewhere else. We create worlds. This is where people have different realities. It is a matter of human invention. Consider the empty space before the big bang, before humanity, before the experience of time."

I remarked that she seemed to be quite intuitively connected with her director (which is not always the case: Catherine Deneuve once told me, responding to how she found Bunuel as a director, that she liked him "because he started shoots on time"). Was Juliette a chameleon, able to go into this Copy universe with Kiarostami, after having made films with Kieslowski on faith and God?

"I don't see them as such opposites. Kieslowski is full of doubts; that was what I loved about him. He put things in question as well. He loved details. For him, the small showed the big. In Kieslowski's Blue, the experience of the character is different than in Certified Copy. She doesn't know what she likes, who she is; she is in an empty moment, trying to put herself back into reality, not knowing how to handle it, put the past back."

"With this film, I felt completely inside the character: in her inside anxiety of love, being loved, wanting to be seen. During the shoot, while walking on these very uncomfortable cobbles, she is never certain she has been seen. Abbas' camera is generous. He does not try to edit, to take something out of me. The seeing and sharing between us allowed me to open up. It is rare to have a male director put the camera so generously on a woman. "

"The challenge of acting in general," she noted. "Is to be as close as possible to the camera. The camera is a mirror. The fact of being seen means that something inside me has to be seen -- the inside landscapes. You can only get into that if you like jumping into the unknown."

She paused to discuss her friendship with Kiarostami. Apparently, they had met over a decade ago, and had a coup de foudre friendship -- and he had been waiting all these years for the right film to write for her. They naturally had "a friend connection" because he loves poetry as she does. And she paints, and Kiarostami paints.

"There is a lot of sharing," she said. "The movie started when he invited me to Teheran and one night he started talking about a story that happened to him in Italy, about a woman unhooking her bra, and I didn't know where it was going. At the end, he said, do you believe me, and he said, well it's not true."

On a more prosaic level: how much is this film about male/female relationships?

"Abbas is pessimistic about whether men and women can communicate. The fact is that women are so much more involved in emotions than men are. We expose ourselves more than men, perhaps because we give birth. Of course, I don't like to generalize: my character is also very male, goes forward, is active. And Abbas also said that the woman character is him: he raised his children on his own, he did the mother's job. As an Iranian man, he is very generous with women. "

She continued with the gender discussion -- perhaps a key to this film which ends with Juliette's character in frustrated tears, lying on a bed. "What Abbas says is that men tend to put an intellectual distance between their emotions and the world in order to function, which is understandable, because if everyone were expressing emotion, the world would be upside down. I think we push men too much in trying to communicate, to get more intimate."

As for the women she met in Teheran, she was quite enthusiastic: "They are very alive. They know about books and music; they are very educated in that way; they are European in that way. True there are rules. At the end they are still very alive, like Italian women."

And yes, she did speak some Italian.