I felt very sad as the car drove along the dark Lisbon coast, heading towards the screening of performance artist Laurie Anderson's new film. Paris had just been attacked by terrorists, in three different locations, over 120 people dead. The world suddenly felt washed in darkness.

"Feel the sadness, but don't be sad," I told myself, remembering an old piece of meditation wisdom, the only one that had stuck with me.

Ten minutes into Laurie Anderson's film, I heard the same.

"Feel sad without being sad," Anderson's deliberately staccato voice said on screen. "This is an old Buddhist saying, and actually very hard to do."

She paused dramatically: "How can you feel sad -- and not be sad?"

Her personal autobiographic film shows us how.

A compilation of stories about loss -- the loss of her dog, the loss of her mother, the loss of her sculptor friend Gordon Matta Clark, the loss of security in New York, and without ever mentioning it, the loss of her husband Lou Reed -- Heart of a Dog expresses a joy in the texture of life as it is. Like Anderson's famed concerts of the 1970s and 80s, her film is a collage of text, image and sound, from past to present, filmed in slow motion, with still-frames and jump-cuts, to a staccato rhythmic beat. A still of branches high in a blue sky is followed by a reddish close-up of the retina of her beloved dog's eye. A panoramic shot of the stark white building holding NSA surveillance files in Utah is followed by Egyptian pyramids in a desert. Throughout, Anderson uses filters over her images: rain, colors, rippling water, bloody drops. Many images are superimposed with scratches, like cracked glass, as if the stories she is telling have been broken by time.

She also poses philosophical questions, intermittently, in a soulful wondering voice, such as:

"What are days for? To wake us up and put between the endless nights. What are nights for? To fall out of time into another world."

The most persistent question is whether language can adequately tell our stories. Citing various thinkers, such as David Foster Wallace, Wittgenstein and Kierkegaard -- whose lines appear in ticker tape on the screen -- the film director wonders about the cracks in our ability to shape the meaning of our world.

"My film is also about words and how we create stories," she told the Lisbon audience that evening after the screening. "What is a story, and what happens when you tell it too often and when you forget it." 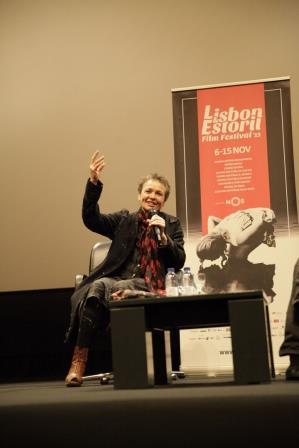 And yet what makes her own film so engaging is her storytelling. Her stories are beautiful in their simplicity and -- as one viewer commented breathlessly -- inspire with their raw confidentiality. One hangs onto each word. All touch subtly on the themes of loss and love, like a jazz piece improvising on the same melody.

The first and lengthiest story is that of Anderson's relationship with her dog Lolabelle. The film begins with an animation dream in which the artist imagines giving birth to this rat terrier, and then relates his dying, and the tenderness that the artist felt towards her. While this story takes up a disproportional amount of space in this dense 75 minute film, even a non-dog aficionado (like myself), can appreciate its greater significance. It is a paean to unconditional love: that which "releases" us from the pain of death. The parallel story interwoven with Lolabelle's death is Anderson's experience of 9/11 in New York, a scattering of observations about "terror coming from the sky" and the surveillance that followed, reflections that serve to frame death from a new perspective, and to position the artist as a New Yorker.

The second half of the film delves into stories of childhood, narrated in a wondrous tone while home Super8 reels play in slow motion (forwards and backwards) on the screen. The most riveting story: that of a childhood diving accident. Anderson, one of 8 brothers and sisters -- "who would do practically anything for attention" -- flipped into a pool and broke her back. She then spent weeks in a children's ward, where she heard other children -- burn victims -- dying. Blood trickles on the screen as she relates the horror of hearing their screams and cries.

It is after relating this life-changing scene -- which perhaps made her the reflective artist she is -- that Anderson gets to what seems to be, subliminally, the core story of her multi-layered film: her detached relationship with her mother. We find out that Anderson did not feel loved by her mother, nor did she love her. The only memory she can summon of feeling loved by her mother is, in fact, that of her mother complimenting her on her diving skill after she (in another "story') dove into a freezing lake to save her brothers from drowning: an obvious coda (getting that attention she needed) to the diving accident related just before.

At this point it becomes clear that while the film seems to be a random collage of meditations on loss, it does have a strong central (and deeply triumphant) narrative arc: the story of Laurie Anderson giving birth to herself as an artist. The film both begins and ends with an allusion to her mother holding onto language as her modus operandi until her dying moment, when all language "scattered." In this film -- as throughout her career -- Laurie has created her own original language. Her story arcs from giving birth to a "dog" in her dream to giving birth to Heart of the Dog, the film itself.

The film is also an intimate love song, addressed to the one person missing in the film: the artist's recently deceased husband Lou Reed. It is no surprise that the film ends with one of Lou Reed's songs, "Turning Time Around", and a dedication to his "magnificent spirit."

After the screening, Laurie Anderson stepped on stage to discuss her film with a thrilled audience. Her familiar cropped blonde hair -- and dynamic athletic movements -- expressed the same buoyant spirit of her concerts forty years before.

"My joyfulness?" Laurie Anderson confided to me the next morning, with a great smile, as we sat for a quick conversation in the hotellobby. "Yes, I have always been a naturally optimistic person. But it's not about 'optimism.' It's about being curious. I believe no matter what pain one is in, one should be aware and curious about what's happening right now. To pay attention to where one is, concentrate on the moment. To wake up!"

Even early in the morning -- dressed in casual slacks rather than the glamorous flowing sweater, leather pants and open-toed boots of the night before -- Laurie Anderson is beaming. Immediately, she began speaking animatedly about all the artistic inventions she had created for her film.

I wanted a textured story, with many layers. I wanted a film that looked like old paper. Thank you for using the word three-dimensional! I had not thought of it that way, but yes, I did want the three dimensional sculpted effect. It's shot on small cameras, with paper filters. My brother gave me the 8mm reels of us as children. It's a movie without a plot, which I believe appeals to audiences as they know that lives are complex. This is how life is: it doesn't have a plot. I use the string sound to bring it all together.

She leaned forward with enthusiasm: "My main instrument is the violin. What I hear when I am playing is very different from how the music sounds when it gets to the audience, as a vibrato. I hear the crunching and grinding. In my work, I want to bring this 'noise-flow' up to be part of the music."

Would she agree with my hypothesis that Heart of a Dog shows a movement from the daughter unloved to the mother who loves: that she creates herself as a mother--- of a dream-dog, of art?

Laurie simply smiled. "That's it too. Part of it. There are many layers."

"And what does the sky mean to you?" I asked.

The most frequent image in Heart of a Dog is a bright blue sky.

My final question (I was about to miss my plane!):

"When I see videos of your concerts of the 1980s, in which you assume a male voice, using a voice filter, I am struck by the fact that it actually did not make a difference if you had a male voice or a female voice, that you could adopt either gender, without it looking like 'drag'. That even back in the 1980s, you did not have the conditioning of femininity to play cute and seductive, or appeal to a male gaze, like so many female performers do, even today. You are so solidly your own person. Can I ask where this confidence comes from? You are an inspiration to a generation of women."

"It's from being in the hospital," Laurie Anderson said immediately.

"That time when I had the diving accident, and the doctor told me I would never walk again. I had to be superior to him. To what he told me. Superior to the adults who made the mistake of putting all the children who were maimed and burnt on the same hospital wing. At night, I would hear the children dying screaming. I found a place inside that I was superior to what was going on around me. I had to trust my own voice. Yes, I never went for [that stereotypical "feminine" look]. I think of myself as an artist and a New Yorker. And only third, a woman."

The last line of Laurie Anderson's film is: "It is a pilgrimage...towards what?"

It is a line that encompasses the film's journey into death and loss.

It is not a sad line.