This year tenor Mario Frangoulis observes his twenty-fifth anniversary as a concert and recording artist and performer in musical theatre. Adding to the occasion is his long-awaited debut in San Francisco which takes place this coming Friday, April 4, at the historic and recently restored Nourse Auditorium. Mario will be performing material from his best-selling recordings -- Sometimes I Dream, Follow Your Heart, and Beautiful Things - all of which were in the top positions of Billboard's Classical Crossover charts. Mario is recognized as being among the best in this genre of music. His 2008 recording, Mario Sings Mario -- a tribute to Mario Lanza, the legendary Hollywood tenor of the late 1940s and early '50s -- was in the top five of Sony BMG's international charts. During our recent interview, Mario and I talked about his early classical training and the amazing fact that producer Cameron Mackintosh cast him as "Marius" in the West End production of Les Misérables when he was only seventeen. We also looked at the relatively new musical term, "crossover," which will be reflected in his program selections for Friday night.

"I'm including songs that have made a difference in my career," he said, "such as Empty Chairs at Empty Tables from Les Misérables. It was my first role in the theatre. Straight out of drama school and I'm playing Marius at the Palace Theatre in London. Then I sang Raoul in Phantom of the Opera and later did West Side Story at La Scala. Tony was a great role for me. I will also be doing some Neapolitan songs and Greek songs. I always pay tribute to my country and its culture and I always sing in various languages. So, in a sense, this concert is my tribute to San Francisco and its great openness. Also, I love performing in cities that are close to the sea." 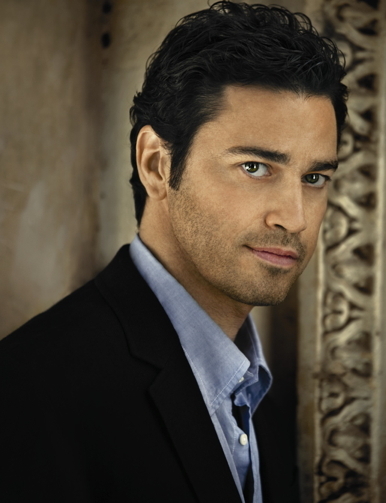 Mario's early success in the West End garnered him the Maria Callas Scholarship for Opera. It led him to Italy and the famed Belcanto Academy for Verdi Voices where he studied with tenor Carlo Bergonzi, one of Maria Callas' best singing partners. Ultimately, Frangoulis became the protégé of tenor Alfredo Kraus -- in fact, the only student the famed opera superstar ever chose to mentor and bring with him wherever he was performing, including San Francisco Opera.

"Alfredo Kraus was one of my most beloved teachers. After his untimely death, I sort-of lost my appetite to take opera as seriously as I did when I was younger. I still study, of course, but not quite with the same passion as I did back then. Alfredo was still very active at that time, still performing at the Met. He used to speak about San Francisco so often and performing there at the opera house. For me, among the live performances I most cherish are the productions I saw at San Francisco Opera, such as the Aïda with Pavarotti."

I was a teenager in 1962 when MGM re-released a package of its major musical films. In addition to the operettas starring Jeanette MacDonald and Nelson Eddy, this cache of lyric spectacles included Show Boat with Howard Keel and Kathryn Grayson, and Mario Lanza in The Great Caruso. The series was spectacular and poignant. Lanza had died three years earlier at the age of thirty-eight. His erratic behavior, along with eating and drinking disorders had taken a toll on his voice and ended his film career. But the 1951 bio of Enrico Caruso was a major box office success and out of it came a gold record for the soundtrack which included one of Lanza's signature hits, "The Loveliest Night of the Year."

He also displayed his great versatility with popular Neapolitan songs and in stunning sequences from the operas Aïda, Tosca, Cavalleria Rusticana, La Gioconda and Rigoletto. The film's re-release stirred a whole new interest in the Italian tenor from Philadelphia and sparked new issues of his popular songs from the 1940s including Day In, Day Out and The Best Things in Life Are Free. These earlier recordings reveal Lanza's outstanding vocal clarity and the healthy personality that was so immediately attractive. In those days and way past the takeover of Rock and Roll, the term "crossover" was not in use. "Light classical" was the expression for popular melodies that required robust vocal chops, a high level of musicianship, perhaps an orchestra. Not exactly operatic, but a phrase and a style not associated with Presley or Sinatra.

"Crossover," said Mario, "seems to me a term that describes someone who comes from a pure classical background but did not sing opera. I would say that Freddy Mercury was a classical crossover. But just his voice, as an instrument -- I thought he was fantastic. The range of his singing and stage artistry was quite amazing. What it probably means is that the singer covers a lot of cultures and traditions and is openhearted and openminded and embracing of all styles of music. Contemporary opera singers may find Lanza's technique dated, but I still enjoy listening to that voice and his passion. I admire him very much and the way he appealed to a bigger audience. Sometimes I'm asked about what I think of crossover singing and why would I do that rather than opera. I've done many concerts where I sing opera without a microphone. I have a good sized voice without all the amplification, but I wasn't sure if that was the career I wanted. It's always been a dream of mine to one day play Rodolfo [La Bohème] or Andrea Chénier and all the heroic parts and the romantic leads that I enjoy so much. I just feel that what I do, in so many ways, appeals to a much bigger audience. I always had this need to reach a lot of people, to help them understand what good music can be and, through me, hear how I feel about opera and what I love about opera singers and the real art of singing. One of my mentors was Marilyn Horne. She continues to care about young people and the art of singing. She said to me, 'What you are doing is very useful also. Don't put yourself down for not following your career to be just an opera singer. Because that takes absolute one hundred percent dedication.' I wasn't sure. I guess I was just too young to have dedicated my whole life to that."

Mario is committed to his charity work. Born in 1967 in Rhodesia, he was sent to Athens where he was raised by his mother's sister and her husband. He knows the advantages of a home environment that includes an appreciation for music and theatre. Mario spent twelve years studying violin and also became fluent in five languages. Today he works as the International Ambassador for the Horatio Alger Association.

"It basically gives scholarships to young people who want to go into higher education, change their circumstances and create a better future for themselves. Young people who have addicted or abusive parents, who are geniuses in their own lives but don't know how to place their own energies. This scholarship looks for these young and amazingly talented people, picks them from a crowd, and puts them on the right path to success through education and training. This is the understanding of the Horatio Alger Association in that these are all self-made business people, entrepreneurs, people who have faced adversity themselves. I care about this so much because when I was young I was given the right chances and had people who nurtured my talent. I was born in Africa in very difficult circumstances. I was separated from my family when I was four years old and raised in Greece by my aunt, my mother's sister. I felt the need to grow from within, to learn, to be educated. This was my self-defense mechanism. I learned to speak other languages so I could communicate with more people and feel safe in this world."

Mario is associated with the Jericho Project which helps homeless people in New York. He also works with Give Us Your Poor, an organization that helps people reinstate themselves into society. He is good friends with its Executive Director, John McGah, who invited him to do the 2007 recording project, Give Us Your Poor, a compilation of seventeen new songs by artists including Madeleine Peyroux, Bruce Springsteen, Bon Jovi, Pete Seeger, and other great singers to help end homelessness in America. Mario gives it all in a sensitive rendition of "Feels Like Home".

"I could be homeless!" says Mario. "You don't have to be a drug addict to be homeless. You could be a teacher and suddenly find yourself without a job and be homeless. I'm also involved with World Centers of Compassion for Children International. There are some cities of peace that were created by the Italian government and Nobel Peace Prize Winner Betty Williams who fought very hard to get this land. They are in the area of Matera in Basilicata. Basically, young people who come from very difficult situations, especially war zones, are taken to these cities of peace where they are nurtured, receive medical care, and attend schools until they are able to make a living and re-enter society. I care about young people and the world we live in -- all the things that make us human beings. We can work all our lives to create a name and a career for ourselves, but for what? We have to help people realize their dreams and feel safe in this world we live in. Education made me feel safe."

This is a crossover we can all relate to. Happy Anniversary, Mario!