Though initial impressions abound, it's still early to fully assess this year's Whitney Biennial. This conversation with Co-Curator Michelle Grabner gives us her first thoughts.

JS: At this particular moment, the day after the show opened, what are you feeling? Relief? Exuberance? Utter exhaustion? Has it yet occurred to you what you've actually done?

MG: Now I get to witness the exhibition's bludgeoning by the press. It reminds me that this is truly the people's show. And by "people" I mean artists. And all feel empowered to immediately weigh-in on the Biennial's failings and failed proposition. It is a real blood sport and honestly it is amusing to observe.

JS: What was your first thought when you were offered the opportunity to curate the show?

MG: My first thought was that this opportunity would forever change my life-long narrative arc as an artist and writer. My second thought was that it was going to be a shitload of work and that it was likely to go unappreciated by most everyone in the artworld except for the few, including Stuart Comer and Anthony Elms, who have taken on this necessary but fraught exhibition.

JS: Besides obvious issues of scale and budget, how does this effort differ from the work you and your husband Brad Killam do at your space in Oak Park, Illinois, The Suburban? How did you steel yourself for what was to come?

MG: The whole experience co-curating the Biennial was a learning experience. The Suburban and The Poor Farm are not institutions. They are not by design, organized around power structures. Because I am someone who thrives on delineating context, seeing up-close the inner-workings of the museum was not wasted on me.

JS: There are many art worlds. There's an art economy. And there's the general public. As you worked through the details of the show, did you have a particular audience in mind?

MG: I am glad you asked me this question. It seems an obvious one but I have yet to be asked it. So first and foremost, I set out to make an exhibition for other artists. I am hoping that is clear to all viewers of Biennial's the 4th floor. Rich in the ideas and the materiality of contemporary art and its influence, it would be regretful if all the critical feedback is directed at the Biennial's curatorial conceit.

JS: What were the givens of the show? Number of artists? Size of the gallery? A single question that your show would answer? Or were you given a blank slate?

MG: We were given great autonomy in how we went about building our exhibitions. Once we emerged with a general idea about the artists and projects we wanted to include, we parsed the budget with our in-house administrative team. I knew early on that I wanted to foreground large-scale gestural abstraction by woman artists so I requested the 4th floor. My colleagues consented to my petition but I compromised by donating a large chunk of the 4th floor to Anthony Elm and his desire to include a colossal camera obscure by Zoe Leonard.

JS: You wear many hats. Artist, curator, gallerist, critic, and teacher. Surely all of these came into play when you planned your show. Can you isolate any of these practices? Did you have an overarching vision for your contribution? Did you anticipate public and critical reaction?

MG: I trusted the fact that I am an artist first. And that curating and the curatorial profession/industry is something that I have great suspicion about. I did not set out with a preconceived idea about contemporary American art. Instead after many glorious months traveling around the country and visiting studios I had to settle on three very general contours on which to organize my floor. I have referred to this as curriculum building, identifying abstract painting by woman artists; criticality; and materiality in contemporary art as loose, non-subjective organizing conceit. So in that way I also defaulted to teaching.

JS: Could you talk a bit about process? What guided you through the selection process? And finally, what were you thinking as you installed the show?

MG: Immediately I knew that there were a few artists that I would include because of their long-standing influence as teachers and mentors to me and to younger artists: Donelle Woodford, David Robbins, Shelia Hicks, Phil Hanson, Ben Kinmont, Gaylen Gerber and Tony Tasset, to name a few. Then it was important for me to develop a context for these artists and to include a selection of younger artists as well. However, the average age of the artists I invited is 55. That is older than I am.

I was settling on artists and artworks simultaneous to developing my three organizing conceits. It was then that I started to work with the Whitney's exhibition designers who helped me manifest my ideas into the volumes of Whitney's 4th floor. When we finally started installing artwork it was a great relief for me. For months prior to unpacking the crates, I was complaining about feigning enthusiasm as it all seemed too theoretical. The 4 months between visiting studios and in actual installation, I was only working with a floor plan, a checklist and jpegs. This may be commonplace when developing a major museum exhibition but remember, I am an artist, and to not being in the company of the artists and their artworks was most dreadful.

JS: In the early planning stages of the show, what were your personal criteria for success? Did they change along the way?

MG: I thought that I would embark on a fair and altruistic process of selecting artists. It was difficult for me to learn the curating the biennial was not a fair endeavor. At one point I wrote a proposal to the in-house curators to use the Whitney's mezzanine galleries where I would include a work from every artist whose studio I visited. That didn't happen.

JS: I can't imagine that you'd second-guess yourself but, having said that, is there anything you would have done different? If yes, what? If not, why not?

MG: The only thing I would have changed is in the installation. I would have preferred greater distance between Alma Allen abstract sculptures and Sterling Ruby's three ceramic basins.

JS: What was the biggest challenge?

MG: When I had to regularly remind artists that the Whitney Biennial is a giant group show comprised of 103 artists.

JS: What are you most proud of?

MG: I am most proud of the artists and their deep and extensive dedication to artmaking.

JS: What sort of relationship did you have with your co-curators, Stuart Comer and Anthony Elms?

MG: We had a supportive and empathetic relationship.

JS: As an artist and critic and, for that matter, as a teacher, you've had your share of critical commentary, both on the receiving and on the giving end. What are your first thoughts on the slew of press the show and your efforts have generated. Tone aside, is there a difference between what Jerry Saltz writes -- "Much of the rest of the show is a nebulous tasting-menu mess that exudes an inert elegiac air" -- and what Mat Gleason writes -- "The 2014 Whitney Biennial is a pile of unadulterated shit."? Does it even matter?

MG: Mat Gleason's piece was a great piece of theater and I would expect nothing else from him. For now it seems as though the 4th floor is being called out as 'less bad' in another 'bad biennial." But that is likely to change as the periodicals weigh in. It is my hope that there will be more focus on the artists and their work and less on the curatorial structure of the exhibitions. And perhaps if the pundits start to think about the 2014 WB as plural, three WB's that represent three very different artworlds, then something more interesting can be gleaned from the exercise.

JS: In general, what's your thought of Biennials -- and not just the Whitney's - as a barometer of art world activity, a builder of community, and a forum for the exchange of ideas?

MG: It is one of few curatorial forms that are for and about artists. But like this rendition of the WB, Biennials have become more about curating than the artists that they host.

JS: What have you learned from the experience?

MG: That I am at my critical and imaginative 'best' in the back-seat, whether that back-seat is in the Midwest, the suburb, or the classroom. I need distance from the center to see its blindspots and to truly understand exhaustive context. The main stage is fine for some, but it has acute limitations.

JS: Now that the show's up, the reviews are appearing, and people are flocking in, do you yet have the distance to answer two simple questions, "Was it fun?" and "Would you do it again?"

MG: It was absolutely no fun. But James, you know me. I would rather engage in a hard lesson and work my ass off. That is my idea of a good time. 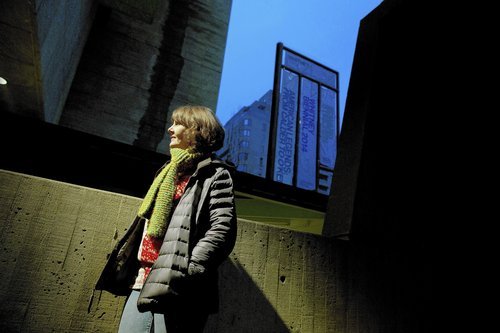