My husband, Jason, has started making beer. Once a month he gets together with his buddy to home brew and talk hops and bottling and boiling levels. Their beer is delicious and Jason had the fun idea to keg some so we can have it on tap when we entertain.

I was teasing him about this -- Because a tap. In my house. -- even though I'm actually supportive. I think people who work full time outside of the home have more obstacles in their way toward hobbies and passions and I'm proud of, and happy for, him that he's found both.

But as we were bantering about the taps, I realized that the real concern was in the room next door. We have kids teetering on tweendom and we need to not only discuss drinking and choices and consequences with them, but also what to do if their friends want to try the alcohol on our shelves (and in our taps).

My parents had a very European attitude toward alcohol. I was offered wine and wine coolers at celebrations and sometimes with dinner. On the weekend of my high school graduation my dad gave a (very nice) waitress a look that I took to mean, "Oh yes, we're in the States" when she said she couldn't serve me a glass of wine to celebrate even though I was under the watchful gaze of my parents and even though my dad was doing the ordering.

I saw both of my parents and their friends drink wine with dinner and liquor in the evenings. There was a night when an (alcohol) line was crossed and we talked about that, too. While I still made some poor decisions in college and I can't draw a straight line from their relaxed approach to a pristine choices record, I respect how they did things with me; they were honest, open, and straightforward.

Jason and I were discussing all of the above when our oldest came into the room and settled between us, stretching her long legs in front of her. The morning was slow with piled breakfast dishes and pajamas and books so we decided to include her in the conversation. 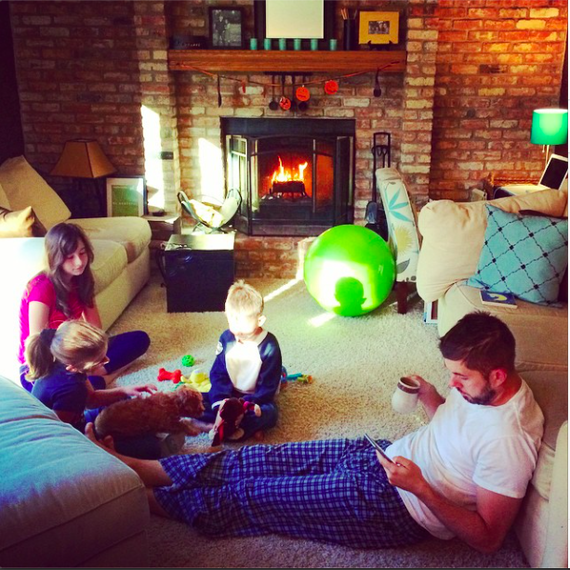 Once we had her attention, I was torn between wanting to parent her like I'd always be there to help her maneuver, and not tell her anything at all about drinking and alcohol and choices, and wanting to open her mind and pour my thoughts right into it.

We didn't end up doing either one of these things.

What we did do is tell her that people, kids, who drink aren't "bad" or "stupid."

We practiced real words she can say if her friends want to try alcohol at our house or anywhere else. Her first response to this was, "My friends would never do that."

So we also shared some of my experiences (not so much Jason's, he was a straight arrow right through college) and practiced words that I suggested like, "My mom'll smell that on me the second I walk in the door" or that Jason suggested, "My dad is c-r-a-z-y about his beer. Not touching it." This conversation was awkward because it was theoretical, but still worthy because rolling her answers around a few times with us will make it easier for her to say them in real life situations.

We also discussed how alcohol works in our bodies, capitalizing on her love of science and understanding how and why things work. We stuck to facts, information she can use when making her own decisions.

And, for that day, we closed the conversation with, We won't get mad at you if you try a drink.

This was sticky to wrap my mothering brain around. I've often asked Jason what made his path so dry and the only thing he can come up with is that he knew his parents would be so very disappointed in him if he did drink. This solid messaging is powerful -- and tempting.

But I don't know if it's my bottom line. Kids make mistakes, are curious, and the important part for me is that if a decision feels sticky to her, she knows she can come talk to us, vent, ask questions, call for a ride.

Even as I write this, I feel that stickiness. It's so much easier to be unwavering, to just say, "don't drink." But I worry that none of this is really that straightforward.

I was talking to a friend about how very hard we're all trying to get these conversations right. And she said that it's like baby proofing your house but still teaching your babies to maneuver stairs and sockets and hard corners so they stay safe at grandma's or day care or a friend's house.

Parenting these sticky topics parallels that, doesn't it? The tap locks are the baby proofing and the conversations are where the safe-keeping lies.

This post first appeared on Galit's blog, These Little Waves.

Galit's book, Kindness Wins, is a simple, no-nonsense guide to teaching our kids how to be kind online. Direct conversations are a big part of this.

More:
Parentsparents-momsunderage drinking
Newsletter Sign Up
Raise the kind of person you'd like to know
Subscribe to our parenting newsletter.
Successfully Subscribed!
Realness delivered to your inbox