It was a creepy sensation to be sitting in front of Lars Von Trier, in the press conference, as he began to speak about being a Nazi, his fist clenched with the letters F, U, C, K scrawled in black marker on each of his fingers (in homage to Sean Penn's Indian Runner).

As he mumbled on, saying that he "understood Hitler", I had a feeling akin to being punched in the stomach: why is this man destroying his career live in front of cameras?

The creepy sensation is akin to what one experiences when entering a Lars Von Trier film. Von Trier's art lies precisely in reproducing, in imagistic and metaphoric form, his inner torture. As he once whispered to me in the middle of an interview: "I am at war with myself."
http://http://www.brightlightsfilm.com/49/trieriv.php

Although he has destroyed his future at Cannes, his Melancholia is one of his best films. Von Trier exposes his inner wounds with wild imagination, and this is why he earns respect, despite his notorious provocative personality -- and extreme bad taste. Jury-member Olivier Assayas avowed at the jury conference that: "Melancholia was one of the best works in the festival, as far as I am concerned. We on the jury all agreed it had great acting, beautiful, and is a very accomplished work of art."

The first moments of this film are thrilling, unlike anything I or my fellow journalists had ever seen on film. After stunning apocalyptic images of planets exploding, we see a frozen forest, with a woman (Kirsten Dunst) in bright white wedding dress starkly framed in the center. Nothing moves in this still shot -- then suddenly the bride's legs sink into the mud, presaging Dunst' later comment: "In my dream, I am trudging through grey woolen yarn and it is clinging to my legs." Another still follows of a field. Again, nothing moves, except, in a corner of the screen, a horse in slow motion.

The movie is then divided into two acts: the first focuses on Justine, played with rollercoaster intensity by Kirsten Dunst, a "melancholic" bride; the second half focuses on Claire, the mundane sister, played in more of a monotone by Charlotte Gainsbourg.

The over-the-top bliss -- with ear-to-ear dimpled smiles -- that Justine exhibits in the early shots of the film, where she tries, with giggles, to park the wedding car alongside the road, transforms very quickly into a brooding alienated expression, as family dynamics emerge. Her demented father begins stealing spoons from the wedding table, her mother (in a tour-de-force performance by Charlotte Rampling) leaps forth with a monologue about how she hates marriages. Her advertising boss sneaks up to her with new schemes of how "to get adolescents hooked on some hopefully life-long habit" (one of Lars' wittiest barbs).

Justine is repeatedly trying to escape, and in the middle of her own wedding, collapses in a bathtub, white dress tossed aside.

If anyone can capture how it truly feels to be at an "idyllic" family gathering, in a supposedly "normal" home, it is Lars Von Trier. We are right there with Kirsten Dunst as she retreats into depressed moping, while her sex-obsessed betrothed does a master-act as the well-meaning lout and her sister urges her to re-boot to normal.

And meanwhile, we have another threat: the planet Melancholia is coming closer to earth, threatening to extinguish all life in the universe.

Throughout, it is the filming that keeps this drama exciting: Von Trier's famous jump cuts creating a jerky rhythm of anxiety; his wide shots on gorgeous lawns in the dark; his panning into the forest until we see Dunst's naked body; his close-ups of neighing horses, wildly distraught. The film is also rich in archetypes---locked cabinets, forests, water, animals---coming, like in all Von Trier's works, from the unconscious.

In the second act, it is Claire -- the grounded one of the family -- who breaks down. Claire can't stand the idea that the world is going to end. The planet -- as we can see through a 3 inch wire hoop designed by Claire's husband -- is now very very close.

Family drama, apocalypse: how does this all fit together?

I took a taxi to Mougins -- Von Trier's hide-out this year in Cannes -- to find out. 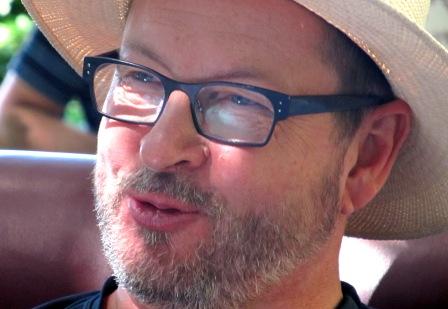 He greeted journalists affably, from under his pale straw hat, sitting comfortably in the garden of the super-posh hotel, the grounds surrounding us as immaculately green as those in his film.

Right off, I asked him about his infamous career-suicide comments at the press conference. In his film-notes he says Melancholia is about the longing for death.

"No, I don't think I was being self-destructive. Well maybe on a subconscious level. I was in a good mood, and I felt everything was going well, and I couldn't stop it. I was saying terrible things, like driving a car and going around a curve, and it was stupid, and I was very sorry. People got hurt. I respect completely their response. "

He straightened up and changed his humble tone, like a man shifting gears in a car:

"I find it a little strange. It is obvious that I do not sympathize with Hitler, but this was taken out of context. It was stupid. Will now the festival only choose people who won't say stupid things at press conferences? If a real criminal came up with a real art film, should he not get the Palme D'or?"

Later, he sent a public statement by email:

In my opinion, freedom of speech, in all its shapes, is part of the basic human rights. However, my comments during the festival's press conference were unintelligent, ambiguous and needlessly hurtful. My intended point was that the potential for extreme cruelty, or the opposite, lies within every human being, whatever nationality, ethnicity, rank or religion.

"Back to your idea that Melancholia is about the longing for extinction," I said, worried that the discussion of the press conference was extinguishing discussion of the film itself. "Quite frankly, I saw the opposite: terror. Doesn't this film expose a new fear of yours: fear of--not longing for--your own death?"

"Longing, fear, it is the same thing," Lars interjected, with his typical quickness of mind. "I am terrified of flying planes, but then the one time I flew a plane, I found the experience fascinating. Fear and fascination hang together."

Fascination and terror: this combination is how Kant defined the 'sublime', and indeed, Lars Von Trier's Melancholia is, in its most powerful moments, sublime.

Perhaps too sublime, Von Trier quipped. He was afraid that in this film, he risked making his shots too beautiful, "like those little chocolates named merci in Denmark. The grounds are golf courses, the woods are civilized. What I have against my film is that if you put men in tuxedos, you worry it becomes very hollow. I worried it was the wrong side of chocolates--"

The movie does everything possible to destroy those chocolates. The wedding -- the symbol of normal bourgeois family life -- is destroyed in every possible manner by the psychotic antics of the bride (and wedding party as well). All cultural artifacts -- such as Beethoven's ninth and other niceties of civilized life -- are powerless in the face of apocalyptic destruction. The black hole has the last say.

"Yes, we are like ants running around, in perspective of the destruction of the universe. The world is disappearing, not a seed anywhere. All these little things that a family consists of -- the arguments they have -- are a waste of time."

He added: "Justine believes normality will save her, but that obviously doesn't happen. Her melancholia is the evil spirits that she feels."

Yet as the film heads towards a potential apocalypse, Kirsten Dunst -- so frail and miserable in the beginning -- comes to the fore as a heroine, having special gifts of premonition, and able -- unlike her fellow family members -- to keep some sort of cool. Several of Von Trier's films have a similar nexus: a rather gifted or strange individual in the center ("Bess" in Breaking the Waves, Bjork in Dancer in the Dark), who holds her own as she faces a horrific threat in the outside environment. And here too, Justine reveals herself to have, along with a huge dose of melancholia, extra-sensory powers.

Why does Lars link melancholia with supernatural powers?

"In the olden days you would go to a melancholic person to get some wisdom you could not get yourself. Many artists are like that, melancholic. Melancholia came from body fluids, and this is connected to Satan, and to the planets. Melancholics have access to something that we can learn from. I have this theory that the brain is constantly filtering out things that we should not know or we would go crazy. A big part of the brain is to filter."

He continued, with a clear statement -- that evidently referred back to himself. "Artists have a filter that may be damaged, and this costs them."

A little boy in the film -- perhaps Von Trier's stand-in for his own vulnerable child-self -- is constantly asking his aunt to make him a cabana, to protect him from the apocalypse.

"Did you have a cabana as a little boy?" I asked Lars.

"Yes, I had something like that, several of them. But in my case, the grownups did not participate in playing."