Pianist Roman Rabinovich is currently on a cross-country tour with the Haifa Symphony Orchestra. It is the orchestra's first appearance in the United States and is being led by its Principal Guest Conductor, Boguslaw Dawidow. It has been a packed schedule with a lot of mileage accumulated in-between venues. The company will be in the Bay Area this week, appearing Saturday at the Marin Veterans Memorial Auditorium and Sunday at the Bing Concert Hall at Stanford University. Roman's repertoire for the tour includes Beethoven's Piano Concerto No. 3, Tchaikovsky's Piano Concerto No. 1 and Rachmaninov's Piano Concertos, Nos. 2 and 3. At twenty-five years old, Roman has a long history with the Haifa Symphony Orchestra.

"I've been playing regularly with this orchestra for many years now," said Roman, "since I was ten years old. By now we've played more than forty concerts together. We can feel each other. It's not the kind of thing you get if you just come for a weekend and you play two or three concerts and that's it. This is a very special kind of relationship."

Roman and I spoke while he and the orchestra were stopping over in Little Rock, Arkansas. He checked to be sure. He had just performed Rachmaninov's Piano Concerto No. 2 in Kansas City at the Kauffman Center for the Performing Arts and would be heading off the following day to Beaver Creek, Colorado and the Vilar Performing Arts Center where he would play Tchaikovsky's Piano Concerto No. 1. I am very excited to know he will be doing this piece when I see him in Marin. 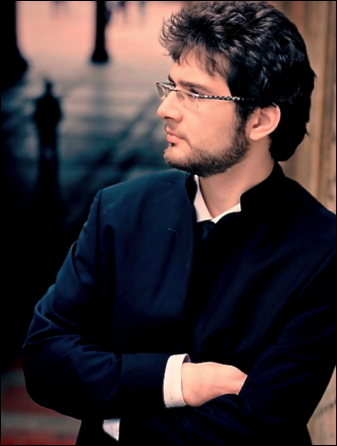 Fifty-six years ago, on April 13, 1958, at the peak of the Cold War, the world was again focused on Moscow. Twenty-three year old American pianist, Van Cliburn had just won the first International Tchaikovsky Piano Competition. In the final round, Cliburn had played Rachmaninov's Concerto No. 3 and Tchaikovsky's Concerto No. 1. The media coverage was staggering. Cliburn then signed a recording contract with RCA Victor, recorded the Tchaikovsky (with the same conductor, Kiril Kondrashin), won the Grammy Award, and the album went platinum. I saw the LP displayed by itself in the window of a record store near my grade school. The cover featured a simple photo of Mr. Cliburn taken during the Moscow competition. The photographer's angle also captured an enlarged image of Tchaikovsky that was suspended in the background behind the piano. Then and now, the photo is charged with association. The album cost $2.98. Even though my parents didn't have a turntable that could play a 33 1/3 rpm, I had to own this recording. 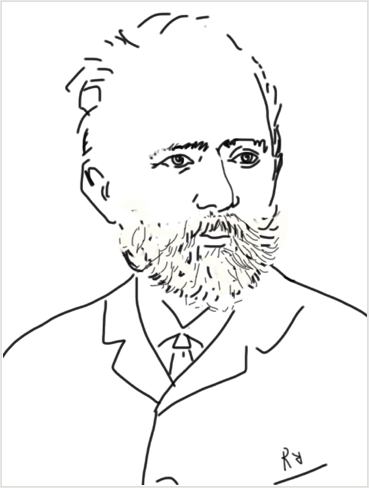 "It's a great piece of music," said Roman. "I grew up listening to Van Cliburn as well. I looked at the score when I was a kid. By the time I was able to learn it, it was such a joy. I played it about five years ago for the first time. It's that kind of work which, as with every great masterpiece, you discover new things when you play it. We've played it eighteen times on the tour. You have to go on stage fresh every time. The piece is very open and generous and it's been an amazing experience to look at it from different angles. There are so many possibilities in it."

Considering the energy demands of a long tour -- and one comprised of four physically challenging powerhouse concertos -- I asked Roman how he maintains his sense of openness and spontaneity from performance to performance. With the Tchaikovsky concerto in particular, is there a passage where he needs to be on high alert?

"The second subject in the first movement," he responded, the section occurring about six minutes into the piece. "Every time, we're playing it a little bit differently. Sometimes it's more hopeful, sometimes more mysterious or sad. It's really hard to describe, you have to hear it. In the cadenza, for example. You put different accents in the climaxes, you choose something slightly different -- how you lead the climax, how you approach the lyrical moments. The tempos for the slow movement are another good example. If it's a generous hall, if there's reverb in the sound of the hall -- you can take a little bit more time and the sound will be beautiful. If it's a dryer hall, the tempo will be more flowing."

"Are there rehearsals in every city?"

"Not always. It depends on the travel schedule. Today is a real luxury -- we have the day off! It's usually really intense. We can stop and rest and think. Sometimes we have rehearsals. I always go a few hours before the concert to try the piano. These are fine musicians. You communicate without words. You look at a player or the conductor and it's all understood. Or, you just hear it and you follow your instinct and your inner ear. If it's an extreme case of some disagreement, you talk about it. Luckily, we don't have such disagreements about this music." 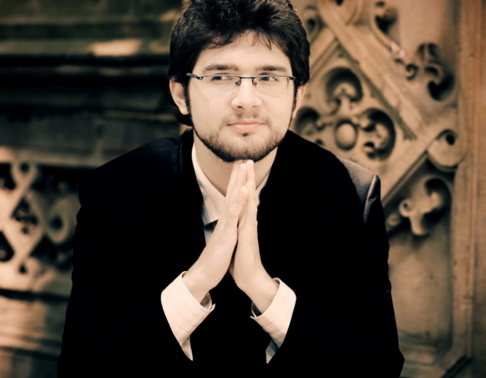 The young Israeli pianist's astounding concert resumé begins at the age of 10 when he made his first appearance with the Israel Philharmonic Orchestra under the direction of Zubin Mehta. Over the years he has appeared in solo recitals and orchestras throughout Israel, Europe, and the United States as well as accumulating prestigious musical awards including the Vendome Virtuosi in 2006, the Animato Competition in 2007, and the coveted Arthur Rubinstein International Piano Master Competition in 2008. His debut recording, Ballet Russes, released in 2013 by Orchard Classics, reveals this remarkable artist's extraordinary theatrical insights as well as his passion for drawing - his illustrations cover the enclosed booklet for the CD.

"When I was a kid," said Roman, "I became obsessed with art books and museums. I had this book by Léon Bakst that I really loved. He was a Russian painter who worked very closely with Diaghilev and this whole scene in Paris doing most of the important posters, designs for the costumes, etc., for the Ballets Russes. Then I started listening to the music. I loved Petrushka from the very first listen. When I started playing the music I knew I wanted to record it and Romeo and Juliet. Then I saw Bakst's poster for Ravel's Daphnis and Chloe. I love this work - just listening to all the amazing and inventive orchestration he created for this world. Then I got the idea of making an arrangement of it for piano. That's how the CD came about, but first through painting. Although Prokofiev's Romeo and Juliet is written later in the '30s when he was back in Russia, as a young man he did several ballets for the Ballets Russes. He was very influenced by Diaghilev's ideas about theatre and that helped shaped him as an artist. So, that's why I thought it would be appropriate to include Romeo and Juliet on the CD." 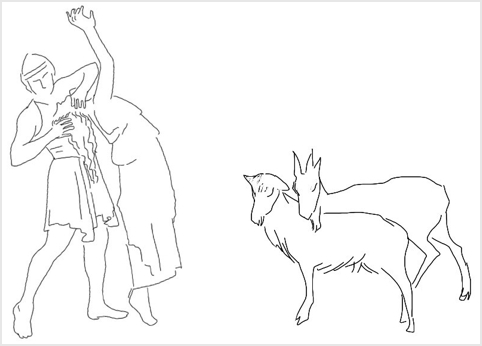 Daphnis and Chloe (with goats). Roman Rabinovich. Courtesy of the artist

"I like to improvise and fool around at the piano. I also know the works by Ravel that he arranged either from the piano to the orchestra, such as Le tombeau de Couperin, or from orchestra to piano, such as La Valse. I have to study all this work to get the sense of the piano-writing and how it was translated from the orchestra. I love reading orchestral scores as well and have become interested in conducting. It's all a big soup. You just experiment. If you're interested in it, just go for it. Find your way. If you don't give your entire self to it, a career in music is not worth pursuing professionally. A good musician has to have a wide scope of knowledge of orchestral music, chamber music, opera, etc., and various aspects of art, culture, literature and poetry. It's important for young people to open their horizons and be patient. We live in a world where we want everything in an instant. But it all takes time to develop and it's constantly developing. There are so many distractions today - and they are tempting. But you can't compromise with music. It takes your entire being."