"You're not a social worker," said Gabe. We ran into each other at Sojourn as usual and were contemplating life.

"I know," I said.
"When it's right it will be easy," he said.
"Yeah."
"Hey, remember that time at the High Life when you stormed out on me?"
I smiled big, averting my eyes.
"'You're not listening to me!' you said, and you got up and left and didn't even finish your drink."
"They do make a good Manhattan there," I said, thinking back on that moment that happened a year ago.
Gabe and I had stayed friends and I always enjoyed running into him.

Another character wandered into the bar.

"Here comes Red-Haired Richie," he said. "Maybe one day I'll scalp him, shave my head and wear his mullet."

I just looked at him. Gabe went out for a cigarette and I made my way over to the high rise table for two Richie had settled at. He sat sipping a Bailey's on the rocks.

"Hello Richie."
"Hello! Where have you been?" he said.
"I haven't been by in a couple weeks, I've been busy with the new job and doing a lot of reading. And I got a part in another play. Just one scene, but it's a good scene."
"Hey, why not? Just showing up and doing it counts. Congratulations," he said, raising his glass.
"So what are you up to this weekend?" I said.
"Well tomorrow first I'll work out. I work out everyday."
"What do you do for your workouts?"
"Walk, jog a little, dance. When I lived on the Upper West Side I would go over to Steps NYC. They offered a 30-minute dance class. I have two left feet, the instructor would say to me, 'No! Your other left foot!' But it was fun and gets the body moving."

"That's great," I said. "Good for you. How long have you been on the Upper East Side?"

"When my wife's health started declining we moved over here. It's more convenient and accessible. So then I just stayed here. It's quieter over here too."

"Yeah, I like it," I said. "So what else have you been doing to stay busy?"
"A woman I know is putting together another production and wants me to help her with some crowdfunding. It's already becoming a production in itself. She's way behind on her timeline and very unorganized."

"The same woman you helped before?"
He nodded.

"I remember. That's nice of you to help her again."
I looked at Richie and wondered if he still dated. I didn't ever see him with anyone, but then again most of the regulars in here wandered in alone and we'd sort of all become buddies.

He nodded. "I mean I could just stay home with the covers over my head. But...I've been fortunate enough to have met and loved two wonderful women. Married to each for over 30 years. Unfortunately, I outlasted both their lives. So the best I can do is keep living, go out, and hope I meet someone to enjoy spending time with.
"The problem is as you get older people develop attachments they carry with them and that can present challenges."

"That's true. I try to stay present, which helps with that sort of thing. I was dating someone recently who carried a lot. He wanted the exclusivity but was not open to the things that go with it, the normal stuff. I need the normal stuff."

Mario, the tall lanky bartender with slicked back dark hair, set down a plate of fries for Richie.
"Anything else I can get you guys?" he said.

"Can you bring me a rum and coke?" said Richie. "Amy, can I get you another glass of wine?"
"I'm okay but thank you," I said.
Mario turned to honor his request.

"They poured me a Baileys when I sat down, which is my drink, but usually after I eat. I don't really like to eat and drink Baileys."

"Do you want to sip some of my wine while you wait?" I offered.
He made a face, raising his hand to decline.

"Ah, yes. I remember, especially red," I said. "Someone in your family, your father, I think you told me, used to drink a lot of red wine."

"Good memory," he said, pointing his finger as he spoke. "I'm not much for scotch either. I used to work for a single malt distributor. I'd come in at 9am and we'd have a tasting. 20 scotches, you'd get a contact high just walking in."

"9am?" I said. "I used to wait tables at an Italian restaurant and they were big on the wine and we'd have tastings too, but at 3pm. So we'd all get buzzed before our shift."

"Have some fries," he said. "I'm not going to eat them all."
I took one and dipped it in ketchup, taking a bite.

"They're not the best with the fries here," I said.

"Well I ordered them extra crispy so it's my fault," he said.

"They actually taste a little better than usual." I took another.
Richie adjusted his round tortise-rimmed glasses. Mario returned, setting down his rum and coke. It was a strong pour I guessed because the scent of rum filled my nostrils from across the table. 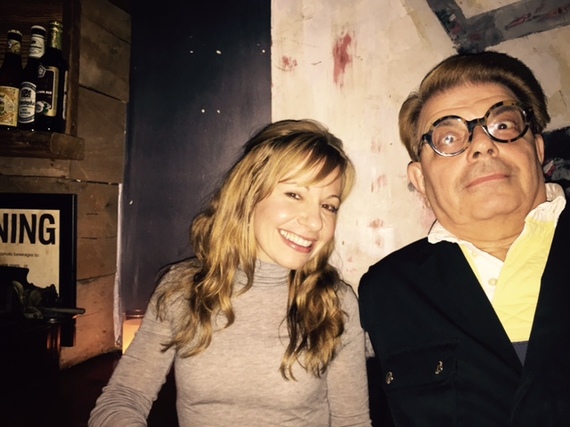 I got up to go the bathroom and on my way back ran into Dean Stiller.

"Amy! Meet these ladies. Amy's a stand-up comedian. She collects a lot of socks."
I laughed. Dean had heard my sock bit at the club. It wasn't even a joke I liked all that much but now he told everyone about it.

"Tell them a joke Amy."
"Hi ladies," I said as they introduced themselves.
"Yes, tell us a joke."
"You have to set it up," I said, trying to escape the joke telling. "It works better when I'm prepared on stage."
"Just tell us one," one of my new friends said. "Give her a second."
"Okay. But if you don't find it funny, don't laugh. No fake laughing is my only rule."
I gave in and told a few jokes. They laughed at the last two.

Richie was heading out and stopped to give me a hug.

"Okay!" he said. "I'm off. Come back soon."
"Good to see you," I said. "I know you gave me your card last time but I'm not sure I still have it."
"I have another." He produced a card from his wallet, red, just like his hair. I wondered if red was his favorite color.

"I will," I said, giving him a big hug. I appreciated his presence and he did mine.

Until next time, "Dream Big!"