I met Richard Dreyfuss, the engaging actor known for his roles in in the Spielberg films Jaws and Close Encounters of the Third Kind (and a hundred other films) in his suite at the Marriott to discuss his upcoming movie, Cas & Dylan, directed by Jason Priestley, the story of a dying doctor who actually wishes to die, ever since his wife's death then years before.

We began by speaking about his role in Jaws. Dreyfuss passionately noted that his character, an ichthyologist, was an educated man, a passionate man, who has a goal. "I only like to play self-aware characters," he said. "It would be very hard for me to play a rural uneducated man."

He also noted that he enjoyed working with Spielberg, "who understands the acting process." Not every director does.

But within a minute, the conversation turned unexpectedly to Dreyfuss' true passion these days: the need for civic education in America.

We have managed to disconnect education from preparation for the rest of your life. We are addicted to immediate gratification, removed from the necessity to take time for decision making, for rumination and contemplation, thinking things through. Under the Bush administration, Bush said: 'Thinking things through is for sissies.' Education is horrible in the United States.

Dreyfuss' passion is such that he recently spent four years studying at Oxford, to prepare for his project to instill civic education in American schools. Already he was speaking to schools in Texas and California, to propose his civic-centric curriculum, entitled "The Fourth Branch", which includes American history, the importance of dissent and debate, and civic clubs, for the purpose of reinforcing Enlightenment values. 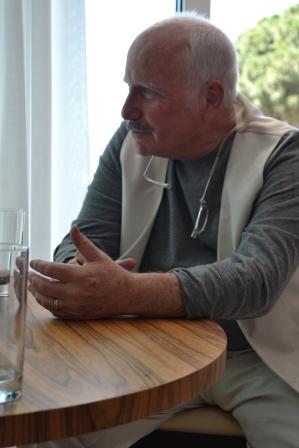 A loveable man to interview---earnest and modest at the same time, with his famous laugh coming to the surface ever so often---Dreyfuss himself interestingly enough had no formal education after high school, clearly an issue for him, as he came back to this point often in our hour together.

"Why did I become an actor?" he said. "Because it is not one of those artistic professions that requires training. You do it spontaneously, in the present. You can't go to class and learn to become a better actor. Plus with acting you are saved the frustration of making mistakes on paper, then ripping the page from the typewriter," he imitated, in his lively way, a hand pulling out the ream.

Dreyfuss perceives a distinction between the gift for expression on paper and that for live expression. As a child, aged nine, he already had the confidence that he had the latter gift. "I was certain I would become a successful actor," he stated firmly. "Certain. 100 percent. I didn't want to be one, I was going to be one." He grinned and gestured to his chest. "I was built for the hunt!" Already, in his family, he always liked be the "spectacle," vying for this position with his siblings and cousins.

"So you are confident?" I said.

"Confident about this one aspect of my life," Dreyfuss qualified. "For example, I never look in the mirror and think I don't look well."

But the same confidence was not his when it came to his high school studies.

"I had a teacher once who pulled me aside after I had regaled the class with a lively talk and told me he wanted a sixty page paper on Darwin from me, with footnotes, or I would fail the class. "'You, Dreyfuss, are a glib bullshitter,' he said."

The teacher was right, Dreyfuss conceded. His gift for oral performance had allowed him to get through high school with no effort, and he barely did a dozen written homework assignments. "I couldn't write things down. But I could make things up on the spot. and it would be fantastic."

Yet he did write this Darwin paper.

It is inspiring that the man who feels he failed at being a star high school student is determined now to make sure that high schoolers receive the education they need to be good citizens.

"America over the last thirty years has become decadent. You can see it in all the newspapers. What is lost is the concept of accountability. You have congress bailing out the financiers with trillions of dollars. No one calls those men to accountability."

As for Dreyfuss' next project, he leaned forward with a grin as eager as that of a young boy. "My second novel. It is going to be a spoken book, about Gettysburg, the debate between Grant and Lee that happened after the 1865 Surrender at Appomattox, with photos and paintings, where I play all the parts. It takes advantage of the latest technology, and we are also going to perform it in theaters, for l000 dollars a seat. I'm interested in Gettysburg because of the incredible effect it had on the world."

As for that dying doctor in the Jason Priestley's film, out in theaters next fall, he gets (plot spoiler) what he wants at the end as well.