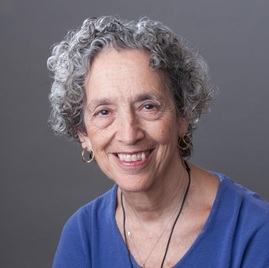 Ruth Messinger will receive InterAction's 2015 Julia Taft Award for her tireless leadership as an activist and social change visionary at InterAction's Forum 2015. As president of American Jewish World Service she helps mobilize faith-based communities throughout the U.S. to speak on behalf of oppressed and marginalized people around the globe. You can learn more about Ruth Messinger by following her on Twitter @ruth_messinger, or join the conversation at #InterActionForum.

Lindsay Coates, Executive Vice President, InterAction: Over your career you have been a tireless advocate for helping women and children, addressing poverty, ending genocide, standing up for LGBT rights and much more. What drives you? What are the family influences that led to these choices? What role has your faith played in shaping your career?

Ruth Messinger, President, American Jewish World Service: My instinct toward social justice comes from my family and particularly from my mother. The general aura was: We have been lucky and have done well, so be sure to do that for others, give up something -- time or money or both -- to help those less well-off.

The instinct was faith-connected because my mother did public relations for a major Jewish organization, and she oriented them to speak about issues like the environment and domestic violence way before those were popular, precisely because they were aspects of the pursuit of justice. She was a colleague of Rabbi Abraham Joshua Heschel who marched with Dr. King and became my Jewish social justice role model. A quote of his has been my mantra throughout my life: "In a free society, where terrible wrongs exist, some are guilty but all are responsible." So Judaism has shaped me at virtually every point in my career, working both locally and globally.

My mantra throughout my life: "In a free society, where terrible wrongs exist, some are guilty but all are responsible."

I was motivated to a career in social work, then to a focus on organizing and policy advocacy as opposed to case work, then to community-based social change and then to politics. In government, I worked on issues from affordable housing to foster care to tax policy, all as a reflection of the pursuit of justice and the importance of speaking truth to power. My faith convictions drove some of this work, but I only rarely made that explicit until I had the opportunity to take up the helm of a faith-based global anti-poverty and human rights organization where I could speak about the work as quintessentially Jewish.

LC: As a mother and grandmother -- you are even roommates with your millennial granddaughter -- what advice would you give young professionals who are just embarking on a career in global development? Are there still particular challenges for women in this and other fields?

RM: I am happy to urge people to do global work, and when I do that I urge them to recognize that change will be slow but that it is going to be an increasingly compelling area for work, as the world becomes more and more a place where what happens any place happens every place. People often have a misguided perception that local work and global work are entirely disconnected. In reality, the work we do locally, including whom we elect to public office and the policies for which we advocate, have a profound impact on the lives of people who live millions of miles away. I am most focused on urging people to be advocates for social change in their professional and personal lives, to look at broader systems of oppression and engage in action for justice.

The work we do locally, including whom we elect to public office and the policies for which we advocate, have a profound impact on the lives of people who live millions of miles away.

I tell all young women that the decks are still on tilt -- whether in politics [where I spent two decades], in the private sector or, even sadder, in the non-governmental universe where there are many women, but they are not sufficiently reflected in the highest positions.

And living with my granddaughter -- a social work student who knows the world needs to be fixed -- keeps me young, interested in healthier food and at least vaguely informed about popular culture.

LC: You joined American Jewish World Service in 1998. What has been the most notable change in the way NGOs operate over this time in the way that they are seen in the world?

RM: I am hugely fortunate to have found life after elected office. I love working globally now, focused on human rights and able to do both direct service and advocacy in the U.S. and elsewhere. And I treasure running an organization that is focused on helping others pursue their own visions of justice. I am proud to be part of cutting edge efforts to respond to donor requests by doing more and more thoughtful work evaluating the impact of our grant making, hard as it can be to measure progress in human rights.

The problems of the 21st century, from extreme poverty to climate change to oppression and forced migration, cannot be solved by NGOs alone.

But I deplore the challenges that NGOs face in raising money, the insistence from funders to fund projects and programs but not general support, which leaves NGOs scrambling to cover administrative costs. I like even less the notion that too many in the political universe have, that this is work that should be done by NGOs, that governments should not be putting their resources into making the world better unless it meets their immediate geopolitical instincts. The problems of the 21st century, from extreme poverty to climate change to oppression and forced migration, cannot be solved by NGOs alone but require the concerted efforts of the world powers.