Soprano Sarah Shafer is currently singing the role of "Rosetta" in the world premiere of La Ciociara (Two Women) at San Francisco Opera. A co-production with Teatro Regio di Torino, the score is by Marco Tutino as well as its libretto written in collaboration with Fabio Ceresa. The story is based on the 1957 novel by Alberto Moravia. The popular film adaptation by writer and director Vittorio De Sica - released in the USA as Two Women in 1961 - starred twenty-six-year-old Sophia Loren as Rosetta's mother, Cisera. When she was awarded the Oscar for Best Actress - Hollywood was agog. It was the first time the Motion Picture Academy had embraced a foreign language performance. The film has long been available in VHS and DVD formats and recently premiered on Turner Classic Movies. The story has always been an opera waiting to happen.

Anna Caterina Antonacci heads the cast as Cisera. In pursuit of her are baritone Mark Delavan as Giovanni and tenor Dimitri Pittas as Michele. Bass-baritone Christian Van Horn takes on the expanded role of the German officer, Fedor Von Bock. Last seen at SF Opera in 2013 as Mary Lennox in The Secret Garden - Sarah Shafer is the ideal fit for the innocent Rosetta. Says Sarah, "I think she is a much stronger character in this opera." 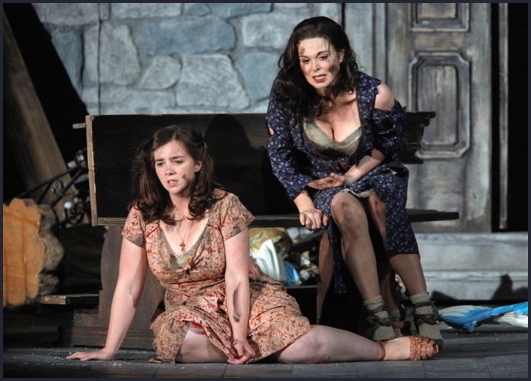 "For me, the role is more of an acting role than a singing role. Rosetta sings throughout, but it's in short spurts. There is no aria and she really doesn't have a full page of singing. She has comments and thoughts throughout - but most of what I do is about what's going on in her head. So, it's an acting role - visually and physically showing her transformation throughout the opera. That was the challenge for me, not doing her journey so much vocally but figuring out what to do physically. That's why it was so great to work with Anna Caterina. She is amazing - very subtle, very strong, a very still actress. She shows so much just through her posture, through her stance, with just one look - and holding that look for as long as she needs to. It's unlike anything I've done before. I learned a lot from working with her, trying to appear like her daughter, emulating and imitating a bit of what she was doing. I learned how little it takes for something to read onstage. You don't have to do very much. You think it. Staying still is actually the challenge."

Prior to the opening night of La Ciociara, I watched several of her live performances on YouTube. Sarah's rendition of "Ain't it a pretty night?" from Floyd's Susannah is nothing short of luxurious. Another account of a young woman who is the victim of rape. Even through the video's limited fidelity, the aria sounds fresh and new, the lyrics shimmer. "I aim to leave this valley some day," says Susannah, "an' find out fer myself; to see all the tall buildin's and all the street lights." Sarah's graduate recital at Curtis begins with a set of Schubert songs, including Im Frühling (In the Springtime), Die junge Nonne (The Young Nun), and Du bist die Ruh (You are Rest). Sarah's rich tonality, exquisite phrasing, and dramatic sensibility shines through each. Turns out, it was Sarah's affinity with Schubert that got her admitted to the Curtis Institute of Music. 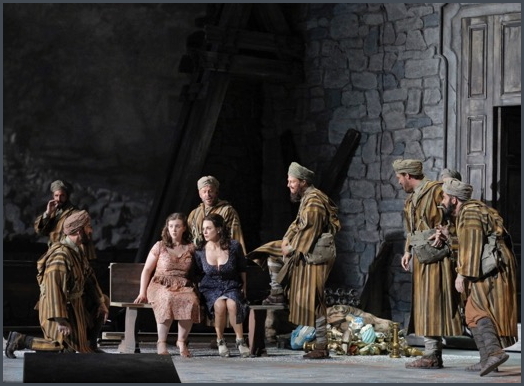 "I never thought I'd get into Curtis. My dad is a pianist, he played for my audition. We did it on a whim. We thought, 'Why not? It's only three hours away from our house.' I sang Du bist die Ruh and Quella Fiamma - one of those twenty-four arias in the Italian anthology - and Jubal's Lyre by Handel. I was shocked to get into the finals. Mikael Eliason [Dean of Vocal Studies] told me later that it was the Du bist die Ruh that got me in. So, Schubert has had a very big place in my life right from the beginning."

Sarah earned a Bachelor of Music in Voice Performance in 2010 and her Master of Music in Opera in 2014. The honors were eight years in the making. Her final role at Curtis Opera Theatre was Sister Constance in Poulenc's Dialogues des Carmélites. Following her graduation she became a member of Opera Philadelphia's Emerging Artists Program.

"It's a support program for young singers. We got small roles and would cover roles in the season, sing recitals and different events throughout the city. We didn't have to be in Philadelphia all the time. It's not about classes. It was perfect for me. It gave me freedom to work and do the things I wanted to do. It also has affiliation and support from the opera company. I got to sing my first Verdi role, the Celestial Voice in Don Carlo. I was working with Eric Owens, Leah Crocetto, and Dmitri Pittas who is singing Michele here."

Other recent appearances include Adina in The Elixir of Love at Memphis Opera; Papagena in The Magic Flute and Nuria in Osvaldo Golijov's Ainadamar at Opera Philadelphia. Following La Ciociara, Sarah begins a concert schedule that includes a July 4th appearance in Nashville where she will sing Samuel Barber's Knoxville, Summer of 1915 with the National Symphony. Then onto her second appearance with the Marlborough Festival where she will perform lieder by Robert Schumann and a new piece for cello and soprano by Kaija Saariaho.

"At Marlborough, you never know how many performances you will have. It depends on the dynamics of the group and what's needed in the program. They make the programs based on what's ready. It's this interesting philosophy that nothing needs to be performed, but when things get to a place of performance - you can submit them for consideration for performance on the weekend. I may have one, I may have four. It just depends. The objective is not so much that it's ready to be performed, but that you're getting to know new and different repertoire at a very deep level with people who care about it as much as you do. So, its not a let's rehearse and play philosophy. It's actually a what's-in-the-score philosophy and what's-it-all-about philosophy." 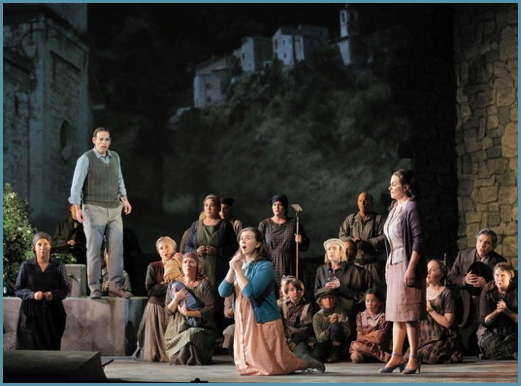 In August, Sarah makes her second appearance at the Bard Music Festival (Annandale-on-Hudson, New York) performing works by what she calls an eclectic ton of different and very obscure composers. Come December 15, she will perform in a chamber opera by Efrain Amaya and Susana Amundaraín, Constellations - in the guise of St. Teresa of Avila. Not her first role as a nun.

I asked Sarah how she would encourage younger singers who are perhaps bothered and bewildered by classical music as well as dazed by the rapid changes in the music industry at large. Where and how does the discussion start about considering a career in opera - especially American opera?

"I think there are less and less young people going to concerts. I would encourage them to be open-minded, to explore, to be curious about what else is going on. It's great and comfortable to know something and be where you are, but you may like something else even better - something you've never heard, don't even know yet. That is the reason I do new operas and want to know what's next - something I didn't know before. That's the way you get better - how you figure out what you're actually good at. Not by putting yourself in a little box - 'This role is for me.' That's not really being an artist. An artist is always looking for the next thing, always thinking - 'What can happen here? What's in the future? What don't I know yet?' You have to be humble about admitting you don't know something. That's what I would encourage any young aspiring singer to do. Be curious!"